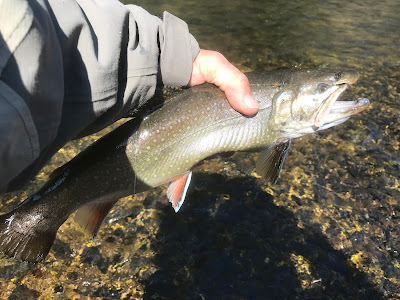 I had caught 2 big trout 2 weeks before my birthday. It was freezing cold and snowy on my birthday so I didn’t fish nor either the next day being the same conditions. I figured one of these 2 fish I caught earlier I’ll have to claim as my birthday trout. 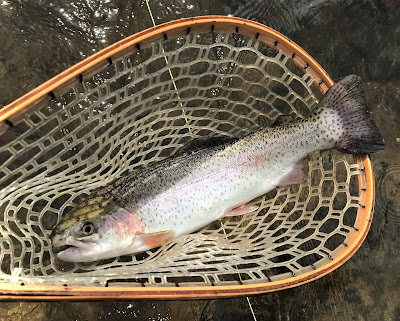 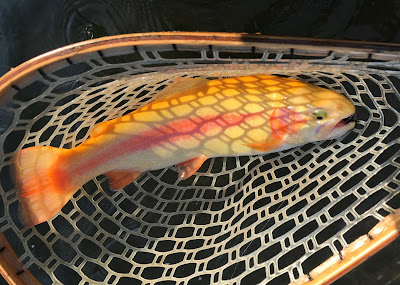 I had caught a few rainbows earlier on Woolly Buggers Monday morning. In the afternoon I was waiting for a hatch of some kind because I wanted to dry fly fish. I sat a spell till 2:30 and only saw a few caddis dance off the water and even fewer stoneflies fluttering about. I was tempted to throw buggers again or nymph fish but refrained. I was sitting on a log searching for just one rise in the section of water the trout rose over a good hatch of caddis and stoneflies the past couple of outings. 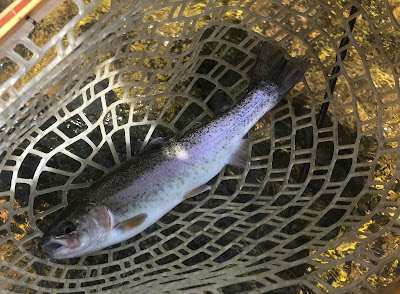 Being I didn’t see any trout rising I waded upstream to where I picked off the rainbows earlier in the day on Woolly Buggers. My back was facing the island of small brush and stony banks. The water was gin clear and just about every rock beneath the surface was visible. The water looked shallow but on a bright sunny day and gin clear water it always appears that way looking from a distance. There was nearly a breeze so the conditions for tossing dry flies weren’t too bad at all. The fact there wasn’t any sight of a hatch or rising trout didn’t appear to be in my favor. Being there has been hatches the past few days I figured I’d give my dry flies a chance and start my own looking hatch. It was that time of day when the other hatches started and lasted for a good while so maybe the trout had a time table and were waiting also.

There was an exposed boulder just out from the far bank. The boulder separated the water flow into a wavy current on each side of the boulder. This left a back eddy and smooth water a few yard behind. I had caught the bows earlier on buggers by casting into the back flow and letting it swing through. It was tough current conditions for a dry fly but I was going to give it a try. I thought about fishing straight upstream from behind the soft water but I had caught trout earlier in the tail out and didn’t want to screw up my chances for maybe picking one off with a dry. Besides that the water that would be behind me was fast, rippling shallow water and if I had hooked a trout and he got into that fast shallow current I would have probably lost him anyway.

I was casting from knee deep water just off from the island. My casts were long, not wanting to spook the trout, across and upstream. I would stop my forward cast in mid-air so the dry and tapered leader would ease its forward looping motion and fall upon the water with enough slack that my stonefly pattern could drift drag free for a few seconds. Every once in a while I got that perfect cast and dropped the stonefly dry in the soft water. The elk hair wing stood up perfectly and most times than not I had trout trying to mouth it for an easy meal. 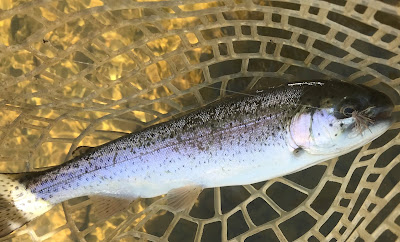 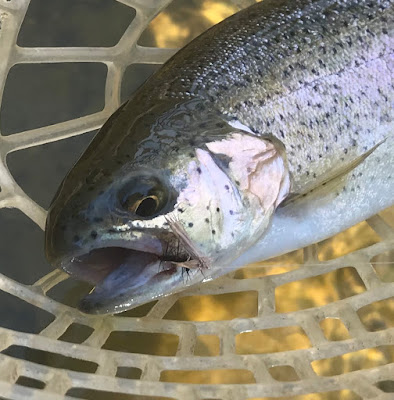 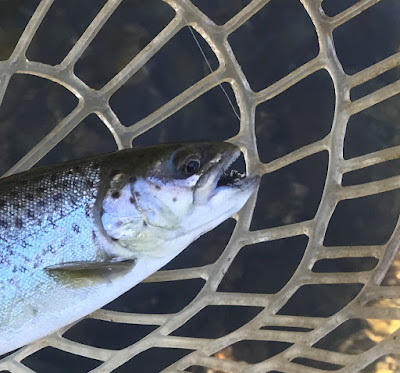 Sometimes I would see a streaking flash of a trout swimming downstream after my dry. If he was able to catch up with it he snapped quickly at it like a dog jumping for a thrown Frisbee. 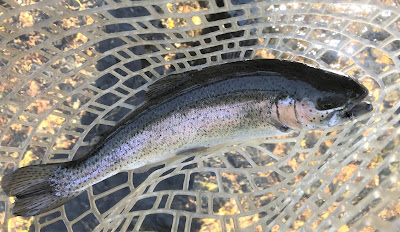 Mind you there was no kind of hatch going on at the time. I was literally making them rise.

I moved down crick just a bit to get a better angle of possibly dropping my dry right behind the boulder. The stonefly dry fell about a foot behind it and kind of sat for a few seconds in the back eddy before slowly drifting through the soft water. I saw a mouth poke through the surface water, facing downstream, and suck in my offering. I whipped the rod upward with one hand while pulling in slack line with the other. The slack line flung up out of the water, the line tightened and I felt the 5 weight top section bow towards the hooked trout.

Anyone that catches trout in fast current knows, unless it’s pretty small, its hard to tell just how big the trout might be. A 12” frisky rainbow, in fast current, feels much weightier than bringing him in through softer water.

With the hook set the hooked trout continued with the current flow than suddenly turned, facing upstream, with a couple of powerful tugs. Nothing too unusual from the past couple of rainbows caught earlier. When the trout took off upstream, on my side of the wavy current, I saw this was a longer bigger trout than I had been catching. I kept the rod facing upstream and gripped the cork handle as tight as I could with the top half of the fast action rod arcing down towards the trout. The trout got to just about across from me when it gave an angry head shake and turned away back downstream. I backed up to shin deep water on the stony shore line while letting out tension line. I knew I couldn’t let him get into the shallower, riffling, faster current behind him. There were exposed boulders throughout the shallower water and swifter current downstream. I was sure to lose him if he got that far down crick. I figured either my 5X tippet may fray against a boulder or the #14 hook will dislodge from the pressure.

He fought hard with weighty tail swats and pulling head tugs in the oncoming current. I had the rod facing out and upstream trying to lead him up into calmer water to net him if I could. He didn’t oblige in the least. I knew he was putting plenty of strain on the tapered leader and if my knots weren’t secure they would have had a good chance of coming loose. I could feel the force of the trout in the current in my forearms trying to keep the rod steady. We were kind of in a stand still. He was swimming to and fro facing into the current trying to tug and pull his way further down crick. I couldn’t let him get any further downstream and had the fly rod angled upstream with the top two sections, at least, bowing and flexing downstream. Any moment, especially when he would surface, I was afraid I would lose him. There was no way he was going to cooperate and swim upstream towards me and he was too weighty to force him. The stony bank water, down from me, was calm and just deep enough that maybe I could get him out of the faster current to net him. I took a chance and swung the rod downstream and towards the stony bank island while pulling in some line with my left hand not letting him swim any further down crick. I watched him dart towards the island with the rod pressure I had forcing him that way. He swam so fast, with the pressure, he actually swam onto the shallow stones and beached himself in the shallowest part of the stony island bank. I thought he was going to grow legs and keep on running across the island. I just about ran towards him splashing water everywhere not wanting him to twist and slap his way out in swimmable water. It wasn’t till I got closer to him that I realized his actual length and size of this tank of a brook trout. My stonefly dry was solidly in the side of his jaw. 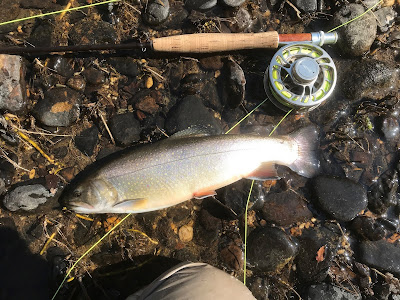 After a few quick pictures of my catch I put him in the net and took him to deeper water. I firmly held him facing into the current. It didn’t take any time at all before he knew he was being set free and scooted out of my hand back into the current and swam away.

I continued to fish the dry stone in the same flow of water only I was behind the soft water fishing upstream. I picked off a few more rainbows before I called it quits and headed for the truck. 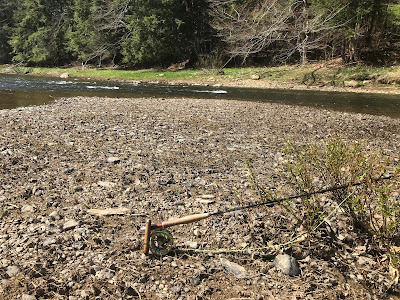 It was no doubt an interesting day. No hatches to speak of but I got trout to rise anyhow with my persistence. Not only that I unexpectedly caught my lengthiest brook trout and on a dry fly to boot. He claims the honor to be my 2021 birthday trout.

My dry flies catch fish no matter the size. 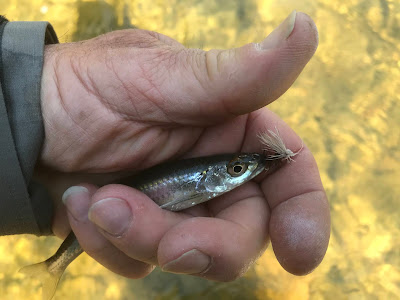