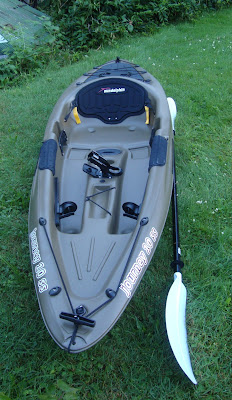 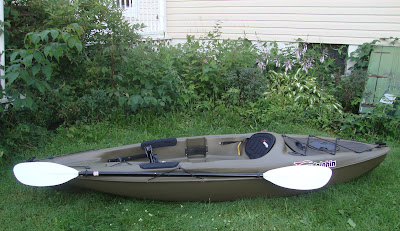 I started seriously looking at kayaks for about 3 weeks. I knew I wanted a 10’ kayak that was light and could fit into my conversion van with ease. I wanted to limit my purchase to under $300.00. I wanted one with rod holders and more concerned about stability than speed. I learned about hull design which gave me knowledge in speed, stability and tracking. I found there were a lot of brands, makes and models in this price range but not all were equipped for fishing.
I read reviews on different models and found most reviews were first time buyers and first time in a kayak. Though the reviews were helpful for a new comer I turned to friends that have been kayaking for a while for some experience advice.
There are sit-in and sit-on kayaks. At first I was interested with a sit-in but after the more I read and listened to advice I felt a sit-on would be more to my liking for fishing.
First there is more leg freedom out in the open compared to a sit-in. I also found there is more open space for readily available angling gear than to reach inside a sit-in. after 3 or four visits to the store I decided on the Sun Dolphin 10 SS angler Kayak.
This kayak is 30” at the beam which I felt would give me more stability than a 28” beam and I felt a 32” beam would be more than I needed and take up a little more space in the van. With a non-angler kayak, which would have been less expensive, I figured by the time I added rod holders it would have cost me just as much or more than a kayak with ones already installed. I also liked the swivel rod holder up front for ease of reaching. 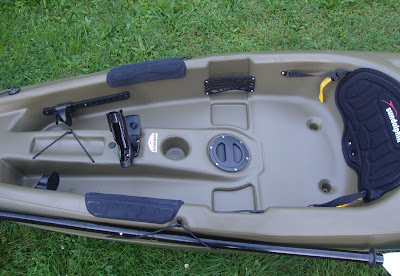 Buying the sit-on I learned about scuppers. These are drain holes that go through the hull to drain water that enters the kayak from paddling, splashes and rain. I seen reviews that some people silicone these shut or use scupper plugs to keep from getting their butts wet. At the store a couple of long time kayakers told me about scuppers. They also said in any kayak you are bound to get wet. I told them that I'm used to fishing in a float tube with water up to my waist so water on my butt isn’t going to cause any discomfort I’m not used to.
After getting it home I made some provisions to adapt to my fly fishing. The swivel rod holder, which mounts between my knees, is made for long handled fishing rods. To keep the fly rod in place I added a Velcro strip that will secure the rod handle above the reel. I also cushioned the inside of the plastic holder with a strip of the softer side of Velcro. This keeps the plastic from marring the rod butt, reel lock hardware, seat and cork grip. I can easily unzip the Velcro to pick the rod up out of the holder. 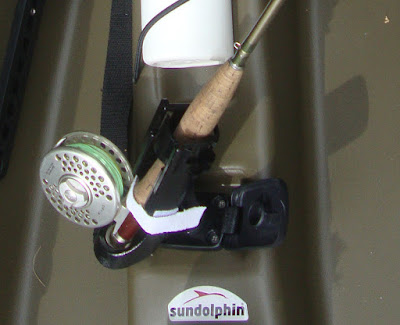 The cup holder, in front, is oversized. With a little sewing I attached an elastic cloth to a strip of wool to put around a bottle. This is within ease of reaching for any fly I would need as well as drying flies out. I also stuck the insert of a fly box to the center console for my streamers. I found the circular sealed compartment up front holds quite a few robust cigars and a lighter. 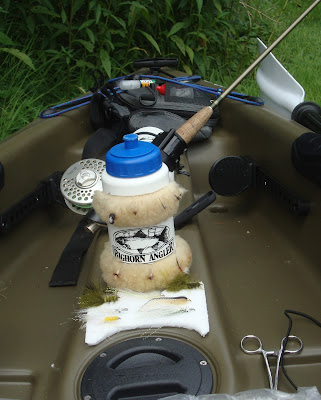 Other than that everything else with the kayak was standard.
1. 2 flush mount rod/net holders behind the seat. (I sealed where they are mounted with silicone)
2. A side pocket for small to medium sized fly boxes on each side.
3. Paddle holder on either side. A must!
4. An open compartment, with bungee cords, in the front of the kayak for my waist pack full of more fly fishing stuff. 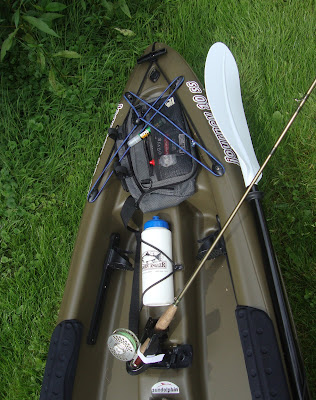 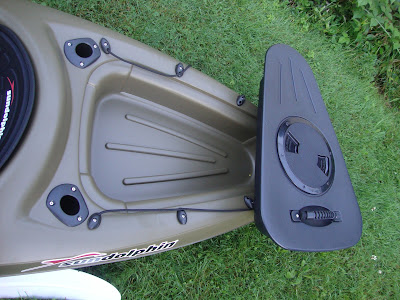 One of the most complaints of a kayak, in general, I’ve read is the poor uncomfortable seat. Whether it is the plastic floor or a padded seat that comes with the unit just about everyone complained about it. Because of this I wasn’t too concerned if the kayak had a seat pad or not. I knew it would get wet any how. For now I use bubble wrap packing material. It is more comfortable than the plastic seat and drains water off well. 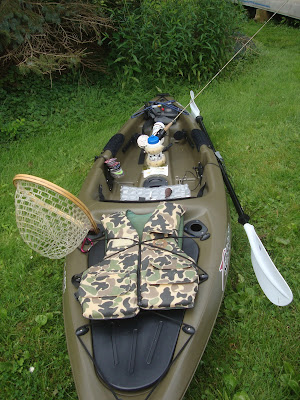 My first time out I was excited but not over confident in my ability to control my first kayak experience. I read about how some kayaks don’t track well and some are tipsy. How some veer right or left while fishing. I am an avid canoeist with many years of experience so I didn’t think steering a kayak would be too difficult. I heard longer kayaks track better than shorter ones so I didn’t know what to expect. Like any canoe, if there isn’t a paddle in the water now and than it isn’t going to track straight down a river. The tipsy part is what concerned me.
Well, here’s my experience with a couple of hours spent on the water with the Sun Dolphin.
Tionesta creek was higher and flowing swifter than I would have liked. It wasn’t white water rapids but there was choppy water here and there. The kayak I felt preformed well with a little guiding of a paddle now and then. I did paddle the kayak cross current of the wavy water and didn't have any 'tipsy' problems. With the swift current there wasn’t a place where the kayak was slowly moving to get more than two casts to a good looking area. I did stop a few times, to wade fish, and getting in and out of the kayak was easy.
Like anything new you got to get used to it. I learned not to be too aggressive in the kayak when paddling and just relax. You don’t want to dig the paddle deep, moving your body and shoulders side to side, while paddling like in a canoe. This is what may cause some people to say their kayak was tipsy. Smooth strokes, in the upright sitting position, are all that are needed. Steering was a breeze. I caught a few trout, about 15”, and a smallmouth bass. Netting them wasn’t a problem even with the short net I had brought along.
I got hung up once on the bottom of the creek. I didn’t have any panic attack that the kayak was going to flip with my extra paddling effort up creek against the flow. It wasn’t that easy but I managed to get above the snag and free the streamer.
Overall I was pleased with the purchase. I got the kayak and paddle for under $300.00. Again, this is my first kayak experience. I’m sure with more water time I will get accustomed to the ‘Yak’ and relax a lot more.  ~doubletaper 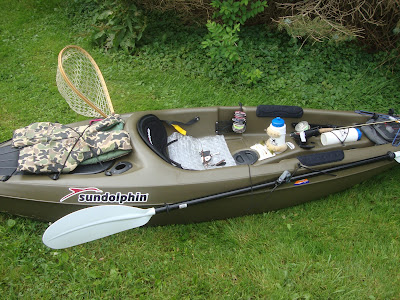 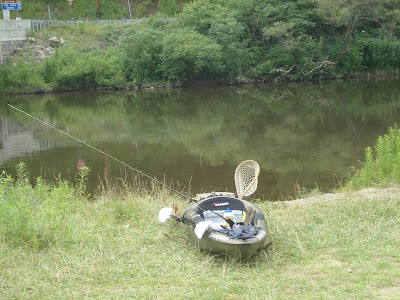 You can read my updated review at;
http://streamsidetales.blogspot.com/2015/12/sun-dolphin-kayak-experienced-review.html
If you highlight the link and  Open Link in new window will bring you to my more experienced review on this kayak.