You ever wake up and decide “I need a new fly rod?”
I open my g-mail and there’s Allen Fly Fishing with a promotion on their Icon II rods. I click on the ‘view rods’ and find their Icon II rods are ½ off. ½ off but why? I have talked with Justin personally and also through e-mails. He’s a pretty down to earth no-nonsense guy from my point of view. The reason he gives for the ½ off sale isn’t because he is overstocked with these rods as if begging you to purchase one. He’s not promoting previous used rods in good condition or telling you those were found in the back of the warehouse in some dark corner and needs to make space. His explanation is simple; ’He wants to get them into the fly fishermen’s hands.’

Allen Fly Fishing is more known for their economical quality reels. I own 2 of their reels, one for trout and one for steelhead, and haven’t had any problem with either.  I’ve been wanting a 9’ 5 weight fast action rod for windy conditions and looky here, a discount. How can I go wrong with a 30 day try it out and return policy if I don’t like the rod? A lifetime warranty if I decide to keep it. I pay a little over $300.00, with free shipping, to sample this rod! If I decide to keep it no more action needed, it’s mine. Oh, and I read they are made in America.

I’m not going to get into the technical make up of the rod. I don’t care if it’s made with Boron, Titanium or carbon graphite. I can’t compare it to other expensive rods or other rods considered in the fast action rod class.  If it’s in my budget, feels light enough for my taste and casts well that’s all that’s needed as far as I’m concerned. I don’t buy expensive rods to impress anyone or to be the first one on the block to own one. If I impress anyone it’s on the stream casting and catching fish.

The blank is made from aerospace-grade carbon. The blank is deep brown with dark mahogany wraps. As far as I’m concerned, as long as it isn’t a bright color, it wouldn’t matter the color of the blank. It’s not like I have to coordinate the blank color to my reel. It has a burl maple wooden insert which is one feature that I love on any of my fly rods. I understand no wooden insert on saltwater rods but if the freshwater rod doesn’t have a wood insert it just doesn’t suit my taste. The hardware on the rod sounds like quality stuff. It has a brushed aluminum reel seat and stainless steel guides. I was surprised that the smooth Portuguese cork handle wasn’t wrapped in plastic when I received it in the mail. Maybe they are made in intervals as orders came in for the 1/2 rod promotion?
When I assembled the rod I noticed there were alignment dots. Looking down the shaft the guides lined up as perfect as my eye could tell. It had a good feel to it and wasn’t as stiff as I would have expected from a fast action rod. I had a 4 day weekend coming up later in the week so I was anxious to give it a whirl.

The four days fishing up on Kettle Creek was mostly windy with good gusts now and then. Except for the few hours Jeff and I spent on a smaller mountain stream I used the Icon II rod exclusively.
I fitted the Icon rod with an Allen LA trout 2 reel with weight forward line. The reel balanced the rod nicely. The fly line was well used with cracks in the coating in places. Even so the rod performed well. Casting weighted Woolly Buggers and weighted tandem nymphs were no problem. Roll casting long lengths of line was a breeze. I cast small dries from #20 Blue Quills to big #10 Drakes without any line twists. The big difference was the longer casts. I didn’t have to use extra force or energy to make long casts that I usually had to do with my other medium/fast action rods. I knew my limits and didn’t try to exceed them. I was sure with a new line the casts would improve. They biggest reason I got the fast action rod was to fight the wind. Again the rod was exceptional casting dries in windy conditions. Overall it performed well enough for my standards and by the end of the day I didn’t feel any arm or shoulder fatigue. Some upper back fatigue from standing in the water all day but that has been getting normal anymore with age. 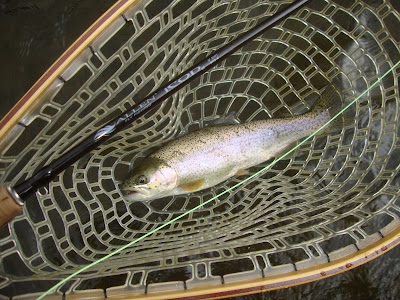 Well, when I got home I replaced the worn weight forward with a newer line I had on a regular arbor reel. My next outing was going to be fishing The Little Juniata and than Tionesta Creek up in the Allegheny National Forest. The lower part of the Little J and Tionesta Creek is more wide open and wider than Kettle Creek. There wasn’t much wind on the Little J but there were times a little finesse was needed with tight loops to get under over hanging branches. In the upper part of the Little J shorter sharp casts was the norm. A doubletaper line would have been better for the occasion but all I had was the weight forward line loaded. I found the rod was excellent as before.

The big test came to be on Tionesta Creek as far as long casts with windy conditions. I was standing in ankle deep water and decided to cast a March Brown Parachute dry when I saw a fish rise along the wavy current ¾ the way across creek. Making those casts with my medium/fast action rod I know would present some extra energy and force to get my dry that far if I was able to even make the cast that distance. No doubt my accuracy would be lost and with the wind might be more frustrating. Let me tell you, the Icon II rod with new weight forward line was tremendous with or without the wind. I made long casts with ease without any straining. Intentionally I would cast right into the wind with the #12 dry fly and the dry would cut through the wind better than I expected with not much back slack. As far as fighting fish it holds its own and flexed fine when I was netting fish.
Overall, with all the conditions I worked it through, it performed better than I expected. Again, I’m not sure what $700.00 to $900.00 rods have in performance, compared to this rod, but I can tell you for $600.00 it’s worth a 30 day test drive. For a little over $300.00 I considered it a steal!! 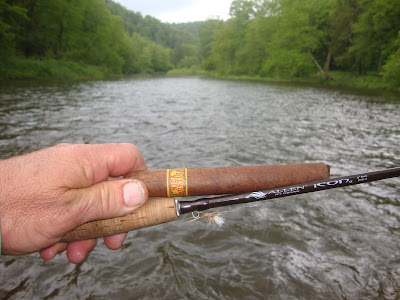 You can read more about the rod at
http://www.allenflyfishing.com/
Posted by ~doubletaper at 6:55 PM