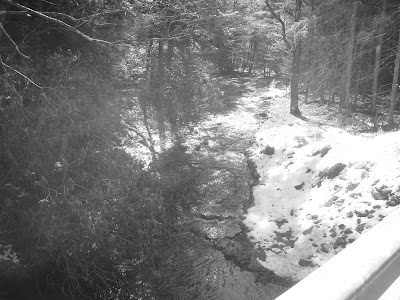 I pulled into the parking lot and there was only one vehicle parked with the engine running. The mail lady evidently had to use the outhouse, in the park, before continuing on her route. I parked, got out of the warm van and immediately felt a cold chill that whisked across my face letting me know winter was still here for a while.

Staying at home, during my lay off, tying flies and sitting out the freezing and snowy weather wasn’t what I called a good time to be laid off. With a little sunshine on Monday I waited till the outside air warmed to above 40 degrees before venturing out to fish. The afternoon sun was above, shining in the blue sky, by the time I got to the parking area. I noticed it didn’t seem its rays were having any effect melting away any more snow.
Walking to the creek, over patches of snow and pine needles, I watched the clear creek water flow with the sun glistening over the water surface. Some snow melt, from the past warmer winter days, had made the creek rise and looked to be perfect conditions for a trout finding expedition.
Back at the van I put on some heavier clothes, to deal with the coldness, and decided to take my Hardy Demon rod for a stroll. I didn’t need to take many flies, just a few buggers, nymphs and I carried a small dry fly box for this occasion. To ward off the chill I brought along a flask of some hooch and took a swig before heading up creek in the shade of the overhanging fir trees. 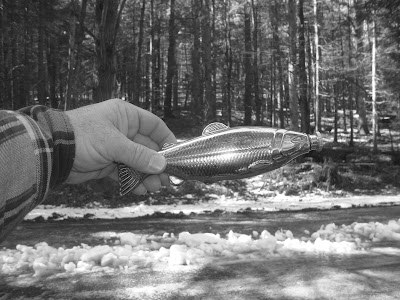 Looking down towards the creek, as I walked the snow covered roadway, there were patches of snow in the shadier tree areas blocking the sun. The sound of the water, splashing over rocks and loose branches, made for an enjoyable nature harmony that was pleasing to my ears. Finding a path up creek, through the forest, I followed it to the creek. As I stepped into the water I felt the coldness of the mountain creek, on my legs, as it flowed around my waders. It wasn’t much time at all before I felt that same coldness upon my feet hidden within the wading boots and heavy socks I wore. 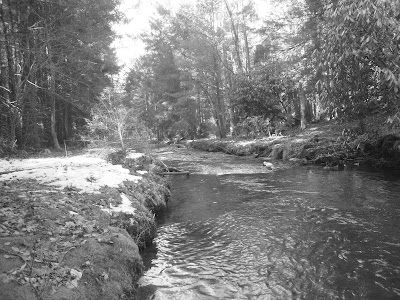 Fishing this ‘spring time’ stocked creek in February I wasn’t expecting to catch many trout if any. It would be like panning for gold a year after the 49’ gold rush on an abandon claim. Sure I might find a nugget here and there but I’m sure not many and not a mother load under some deep pocket beneath the laurel.

I first decided to fish a dry fly hoping to have a hungry wild trout rise to the offering. I maybe spent a half hour or so wading and casting up creek without any risers. I lit a stogie, before knotting on a small streamer, and turned down creek and fished back towards the van. I made long casts, where I could, so the trout facing up creek had a harder time detecting my presence. I moved slow, trying not to disturb the water too much, for the same reason. I’d catch a branch now and than on a back cast and spend time undoing the snarl. Occasionally I hooked an over hanging laurel leafed branch and have to disturb the water, I was fishing, to retrieve my fly. It took some time but I finally felt a swipe on my offering and set the hook. The trout scurried about in the shallow creek water as the 3wt Demon rod tip flexed like keeping up with a tempo. A fine small brook trout came to visit. 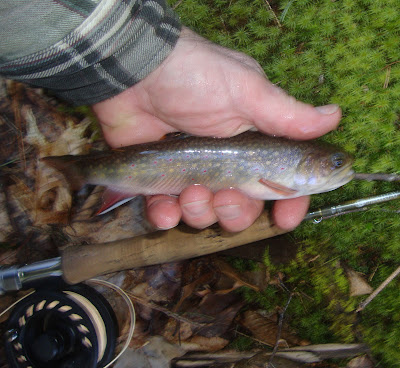 There appeared to be a long pause before my next catch.
After fishing a deeper hole, below a water fall, I moved back on the bank and cast across creek. The bugger fell into a deeper run and began to descend down into the tail out. I saw a darting flash coming out from under the overhanging laurel but the bugger must have passed by too fast for the fish to take it. With the same accuracy I dropped the bugger in the same spot as before. Once the bugger drifted passed the laurel overhang, I let it ‘swim’ in the current below. A short tap was all I needed to know the trout was interested but I waited for a harder tug as the line and bugger, drifted side to side, in the down stream flowing current. With, what felt like a swooping grab, the trout tugged harder and I knew the hook set was good. The trout hastened back to the cover, in the shade of the laurel branches, with my bugger in tow. He tussled with the rod and line for a short bit but gave up quickly in the coldness of the water. This time it was a colorful brown that took my offering. 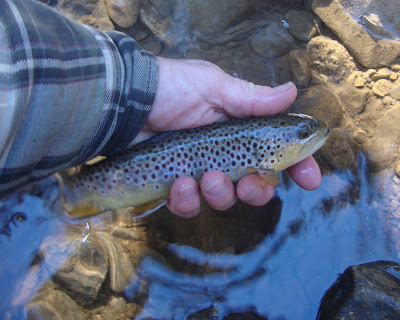 I started to feel a little colder and noticed the sun had disappeared behind the moving gray clouds. It was still bright out but the coldness of the winter forest was now causing a little more chill in the air. I took out the flask and after a swig or two licked the sweet bourbon taste from my lips. The bourbon went down a little harsh, being my throat was dry, but warmed my innards in no time. 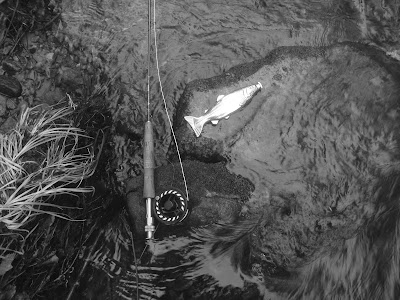 Continuing on it would be a while before my next hook up. I was just down from the parking area where I know many people had fished this section of creek. There was a good run of water, from the narrowing of the creek, which emptied into a wider pool. A fallen branch guarded the far bank but the pool was open in the middle for some distance to the next narrowing of the creek below. I moved just down creek from the fallen branch and stooped down upon the bank trying to hide my silhouette. A quick wrist landed my slim streamer just behind the fallen branch. I kept the rod tip high, as nymph fishing, until the streamer passed by me. Then I lowered the rod tip nearer to the surface water letting the streamer drift down creek. ‘Wham’ a trout grabbed the streamer hard enough the momentum swept the fly line towards my side of the creek. The trout must have been along the far bank and, seeing the streamer pass by, shot across creek to intercept it before it continued on. He probably set the hook with his forceful grab of the streamer but I twitched the rod back just to make sure. He scurried about in the wide pool trying to get free but failed at every tugging attempt. This time a nice frisky rainbow joined my tally. 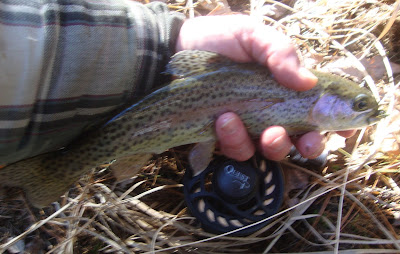 I caught two more frisky rainbows before lighting another stogie and continuing down creek. 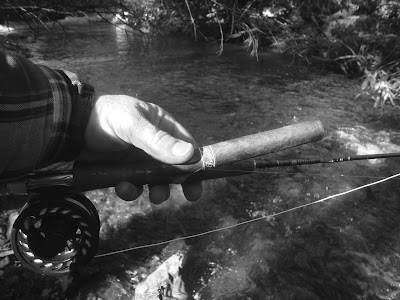 The next half hour was fruitless. I couldn’t get anything to bite in the dimming light and overcast shadows upon the creek. I took my time making boot tracks in the snow, upon dry land, towards my van.
A good porter tasted great wetting the dryness in my mouth and throat while I changed clothes. I finished off the lit Fuma on my drive home. 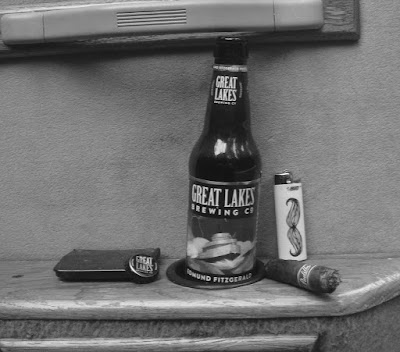