How could any outdoor loving fisherman not love a tailwater fishery?
A river wide enough that even a novice kayaker or canoeist can maneuver outside a fly fishermen’s casting distance. 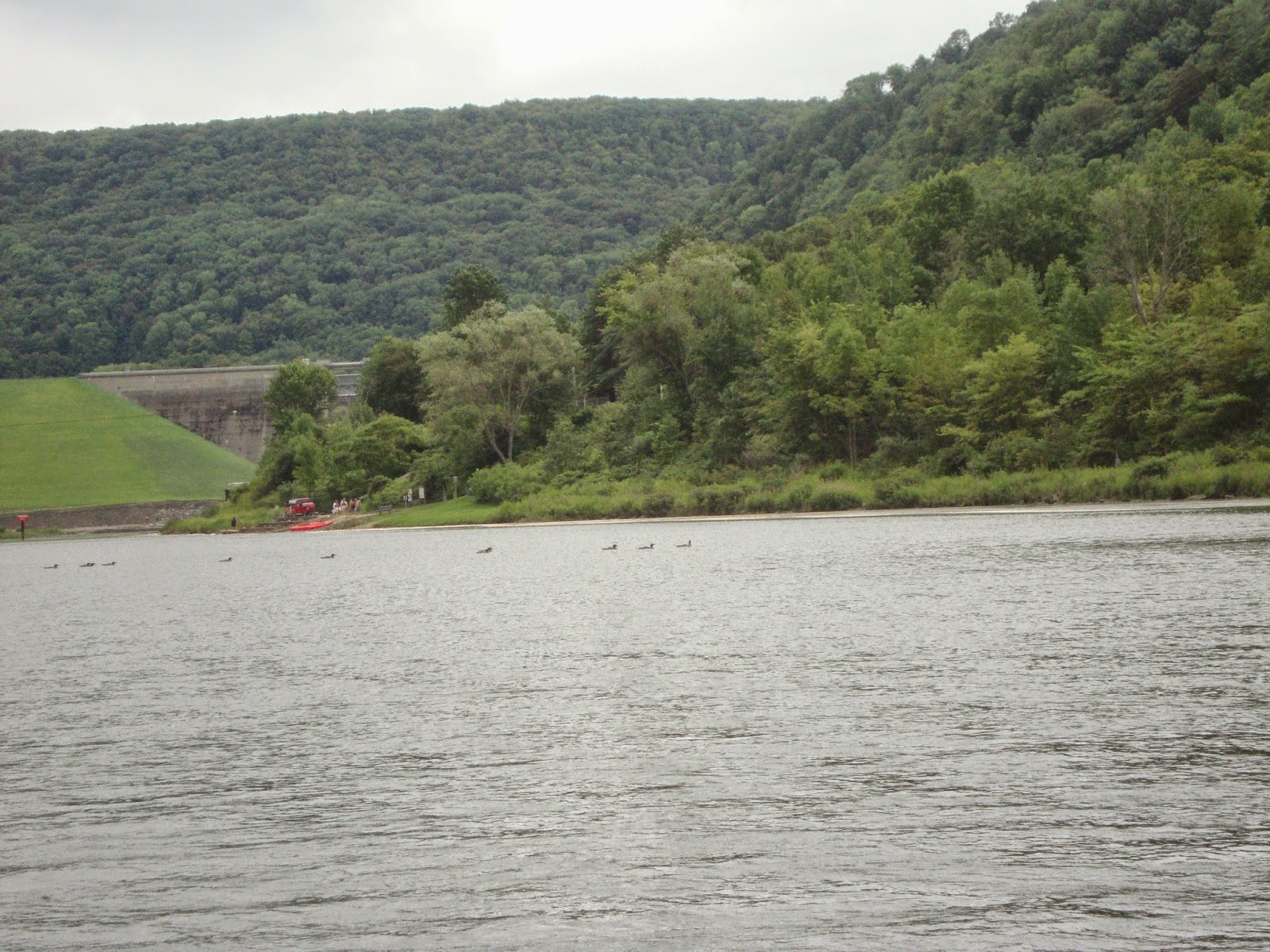 Standing in the tailwaters I roll up my sleeves and light my first cigar, a 55 Corojo perfecto. I could feel the cool morning breeze on my bare arms and upon my head through my woven straw hat. The dusty clouds move from mountain top to mountain top under the bright blue sky.
A few Caddis are already seen fluttering and diving near the water surface. 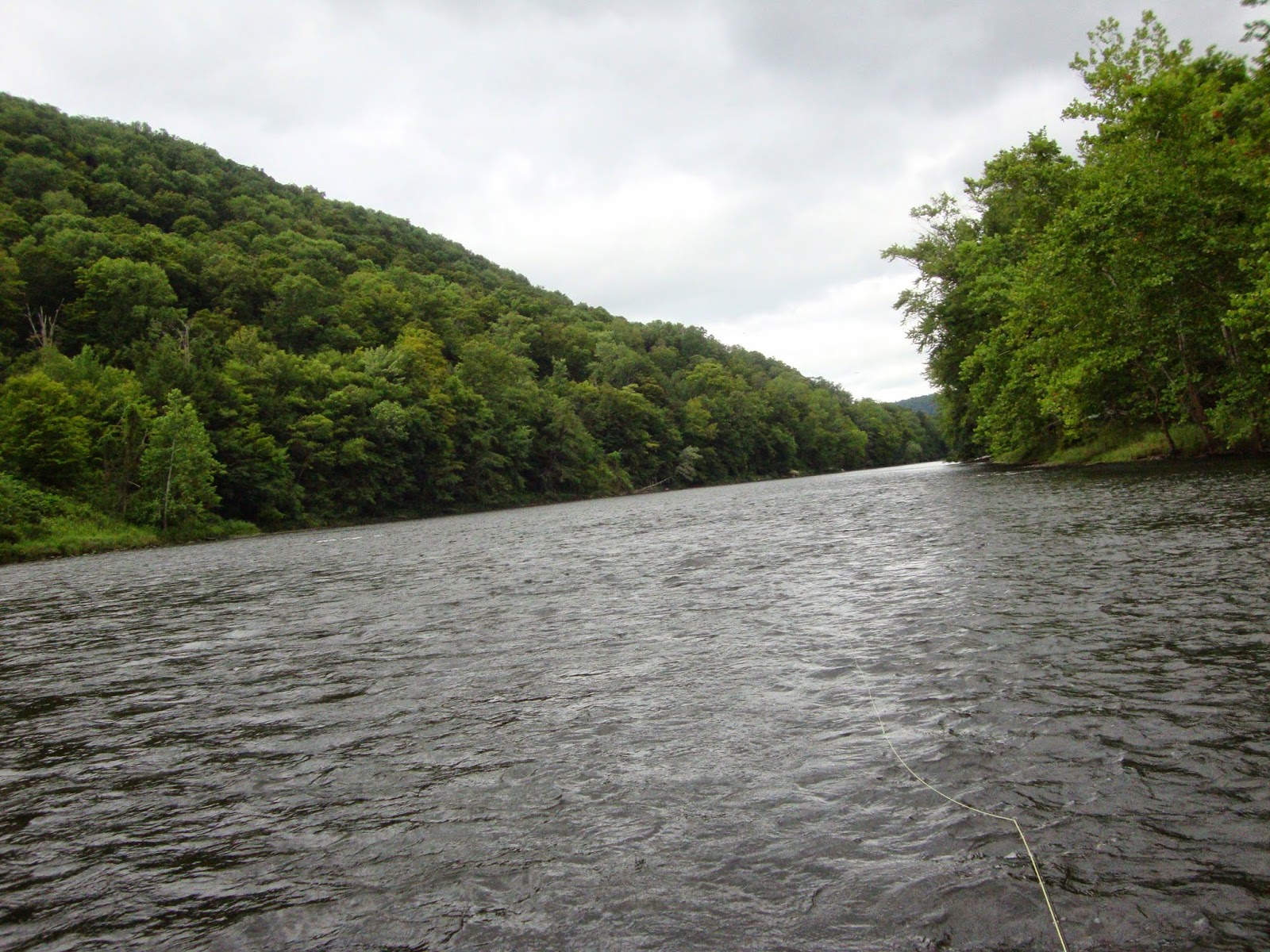 I tie on a Woolly Bugger and begin fishing while watching for any rises. I spot the first rise. I nip off the Bugger and tie on a matching Caddis imitation. 1,2,3 casts and a trout slaps at the caddis, the line tightens and the trout struggles in the quick current. The rod flexes during the struggle. The first trout comes to net. Not a big trout by any means but the chunky rainbow puts a bigger smile on my face. 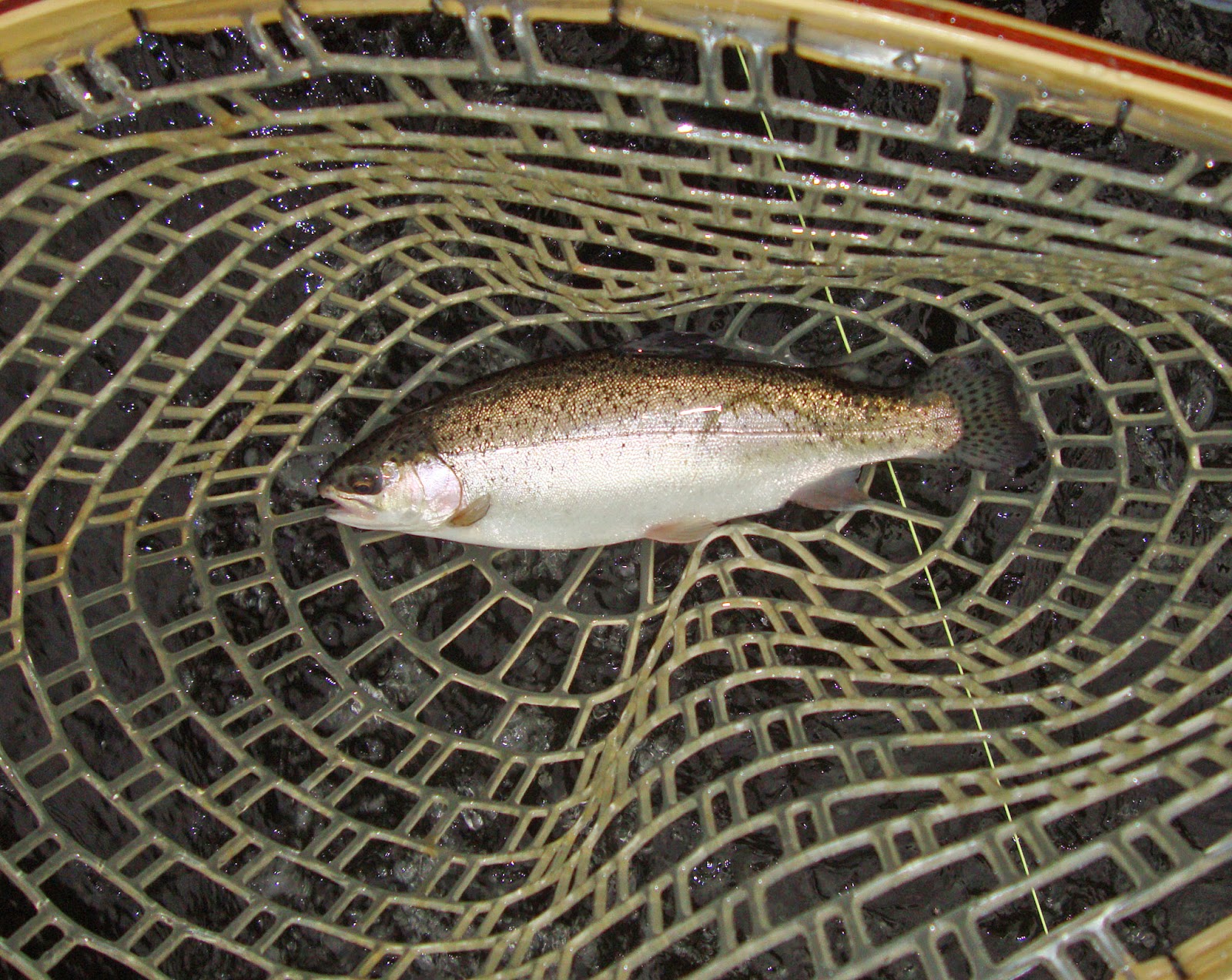 The sun finds a gap between the clouds and more Caddis flutter about which causes more rising trout. Flycatchers fly from tree tops from one bank to the other, swooping down on the fluttering caddis. The river waves sparkle from the bright sun like wardrobe sequins under stage lights. Spotting my dry Caddis is at times difficult but the splashing rises are evident. More chunky rainbows come to net. 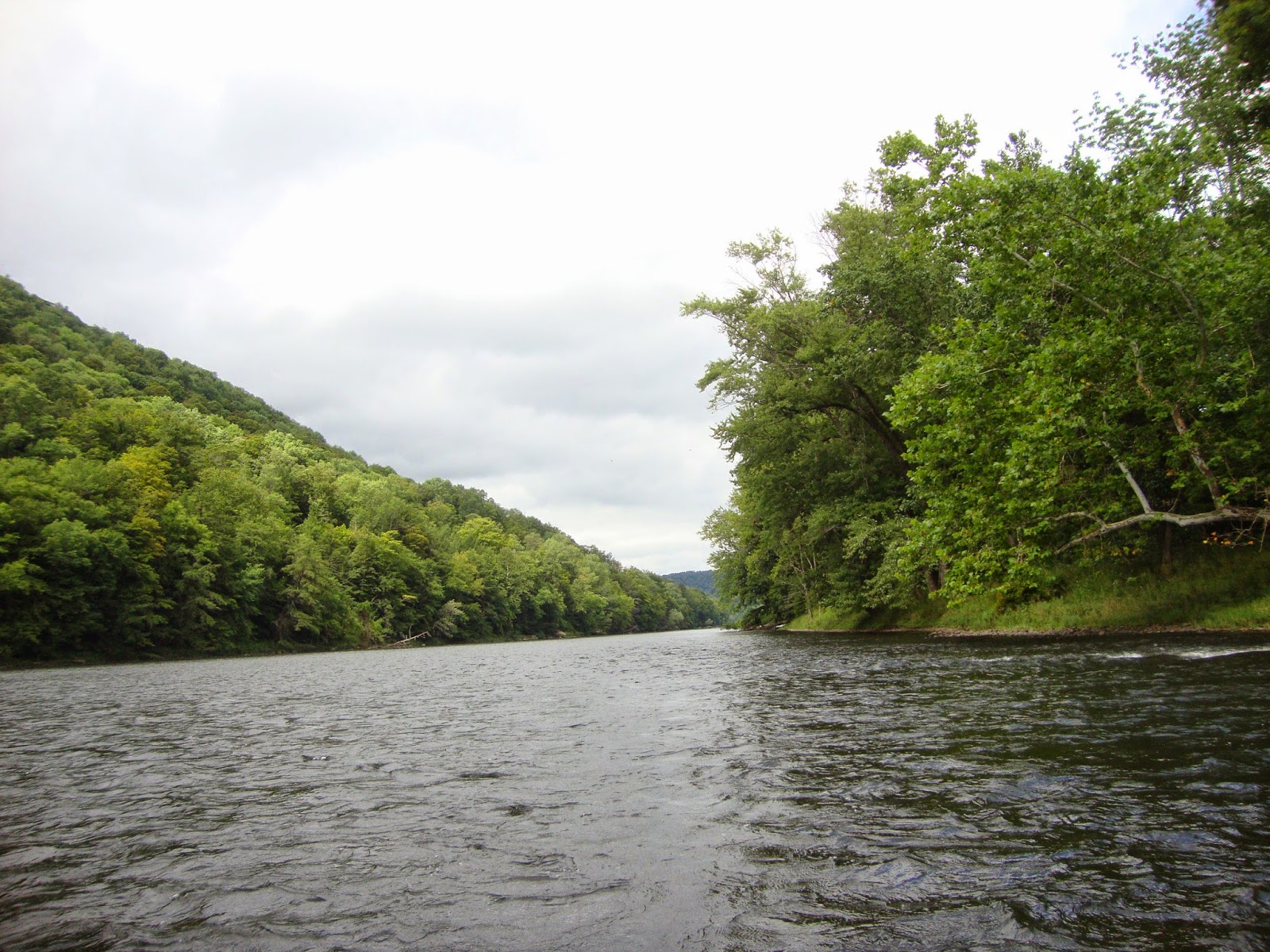 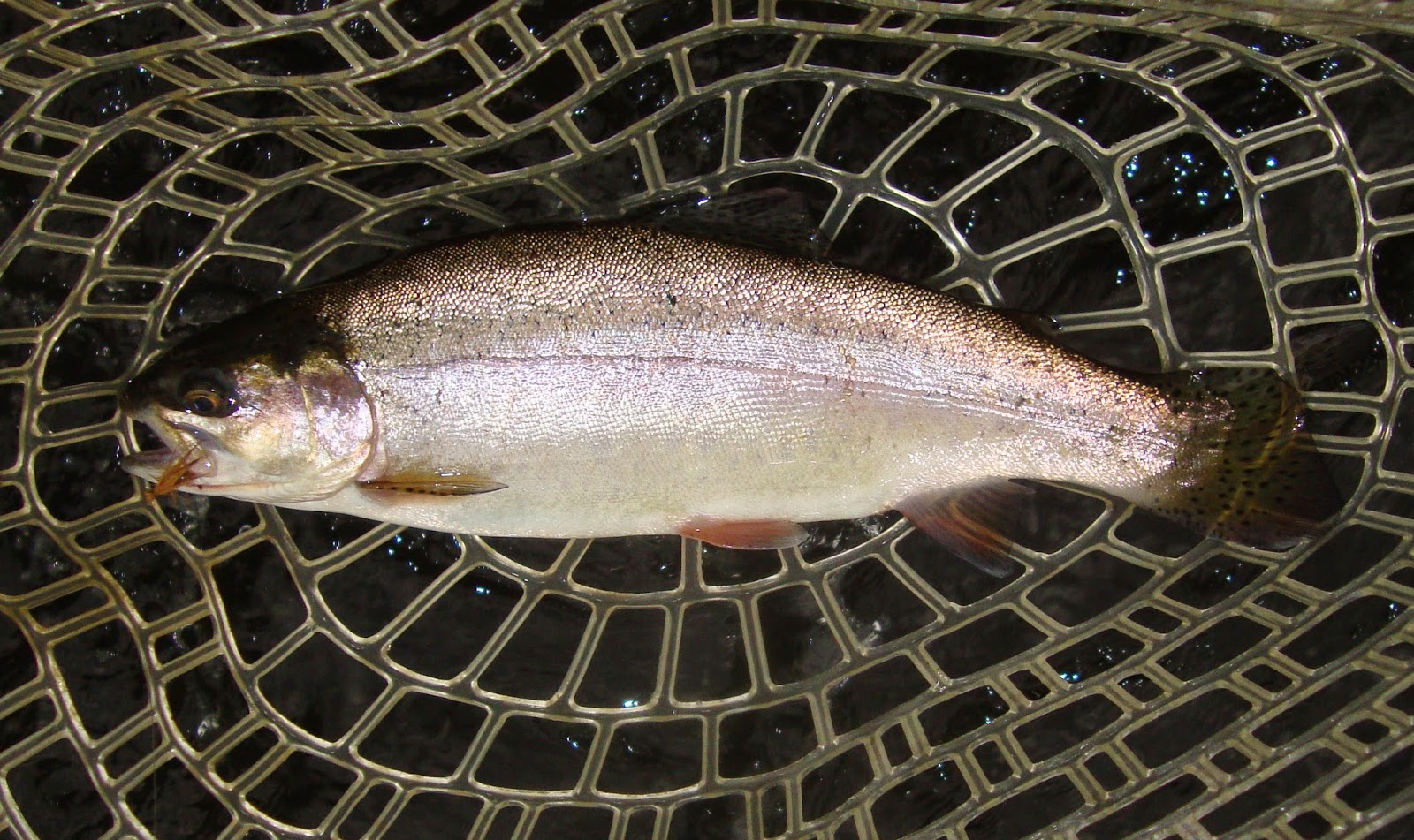 Time passes as I cast out into the open water time and again.
Another cigar burns, another trout rises and another tight line and struggle resumes. 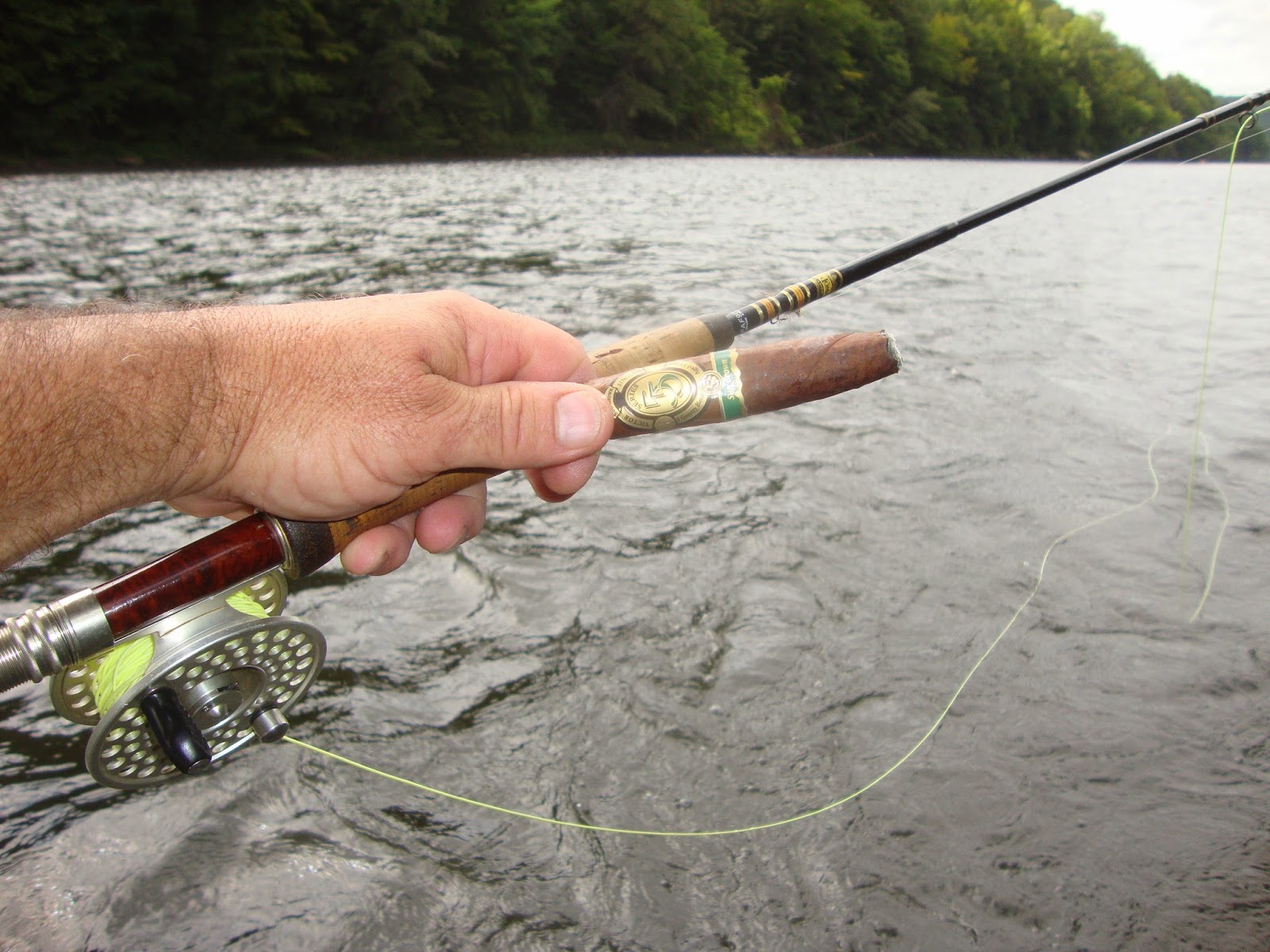 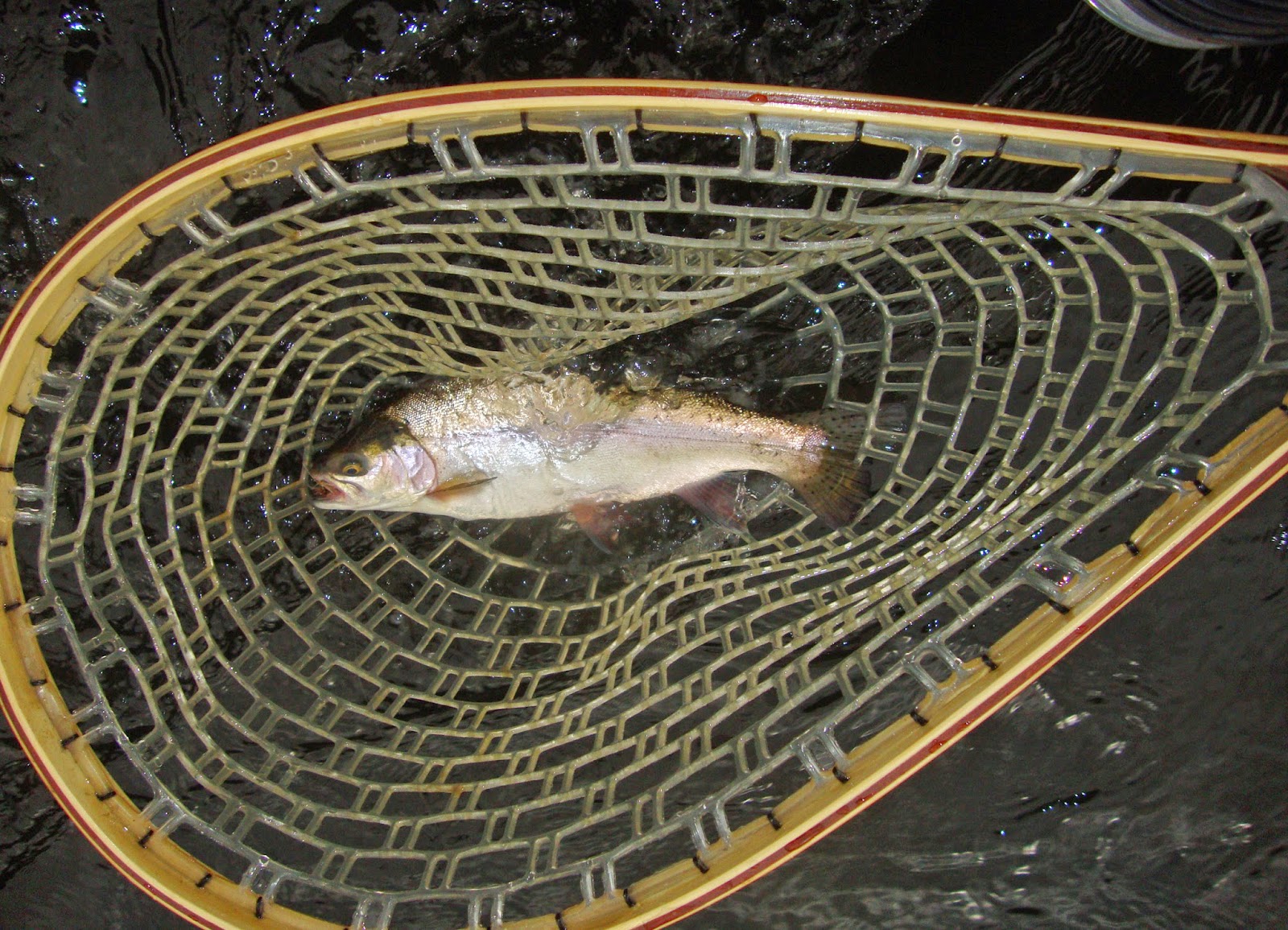 Ususpecting trout fall victim to long casts of Caddis imitations.
The workout of casting seems endless as do the trout! 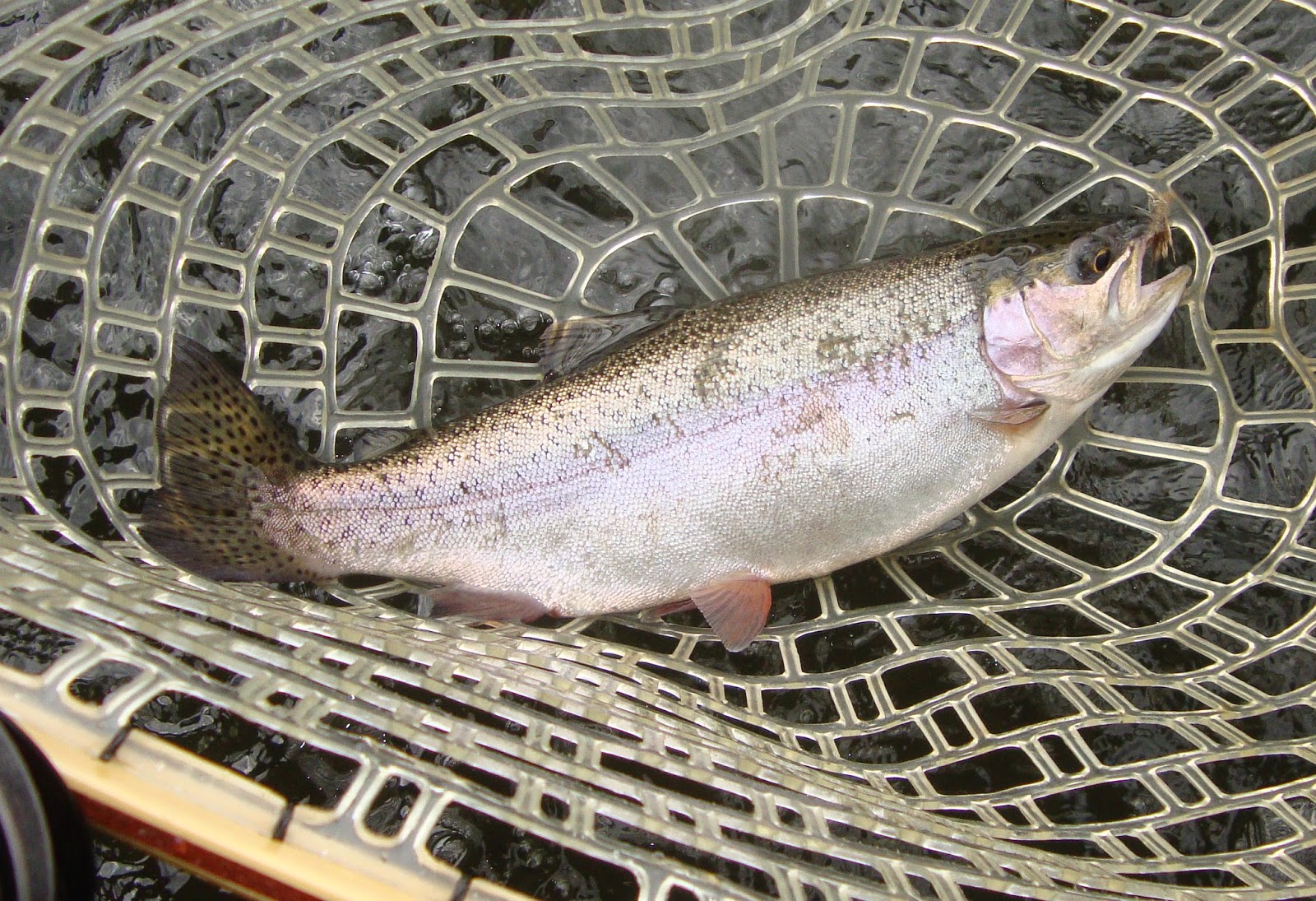 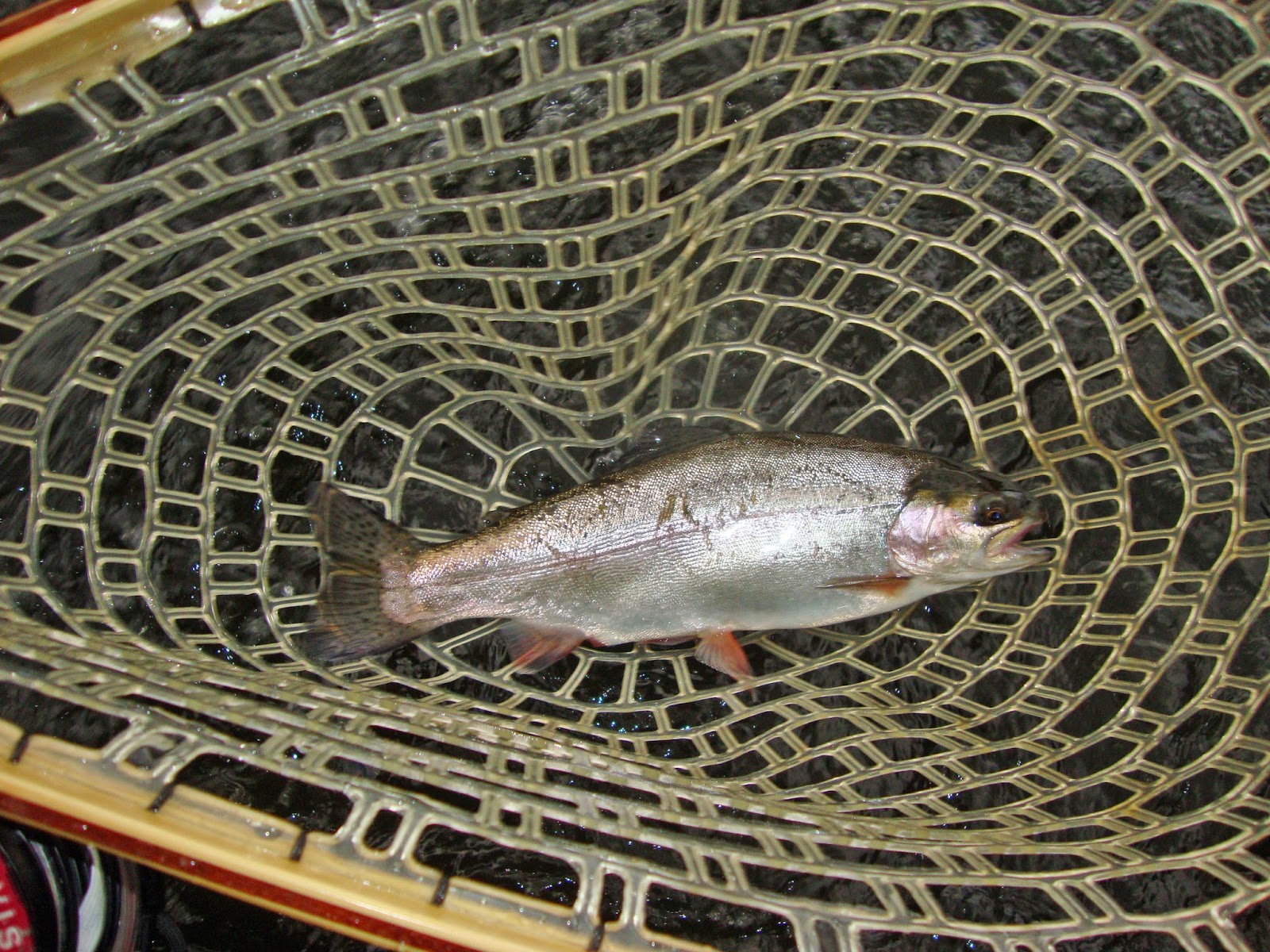 Back at the van I quench my thirst with a cold sweet tea before lighting up a Counterfeit Cuban
for my long drive home.
The results of time spent is well worth my effort.
Another fishing adventure concludes with lasting memories! 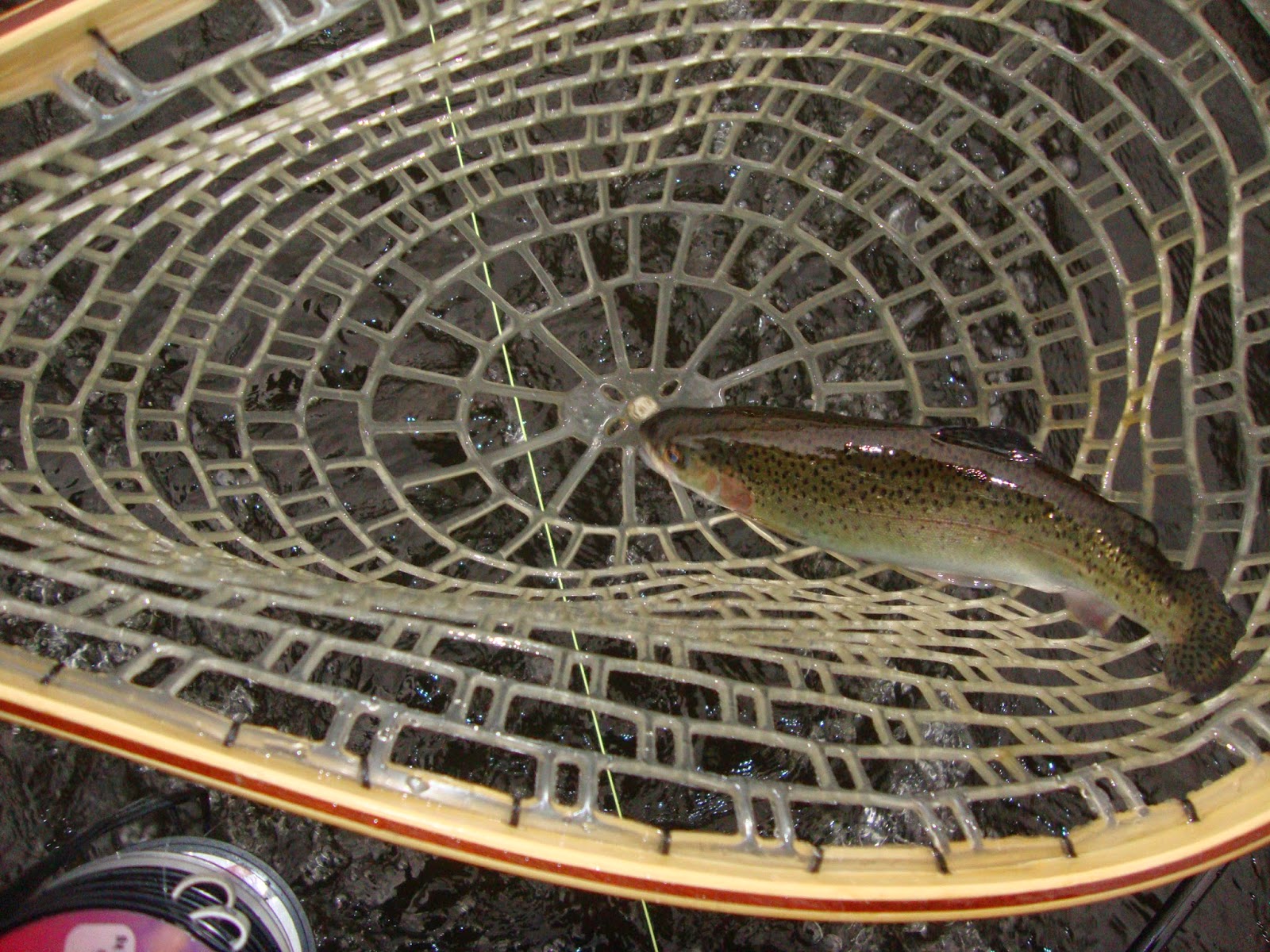 “See that undercut in the bank, I’m gonna to put the beetle right in there”
“There’s gotta be one in there!”
I made a couple false casts to get more line out. When I felt I had my distance I single hauled my back cast and bent forward at my waist as I started my forward cast. The loop unrolled and I let fly line slip through my palm enough to pinpoint the drop zone before pinching the line with the rod extended. The beetle fell under the overhanging curved root and into the darkness of the undercut. The white parachute, atop the beetle imitation, was very much visible upon the surface water… 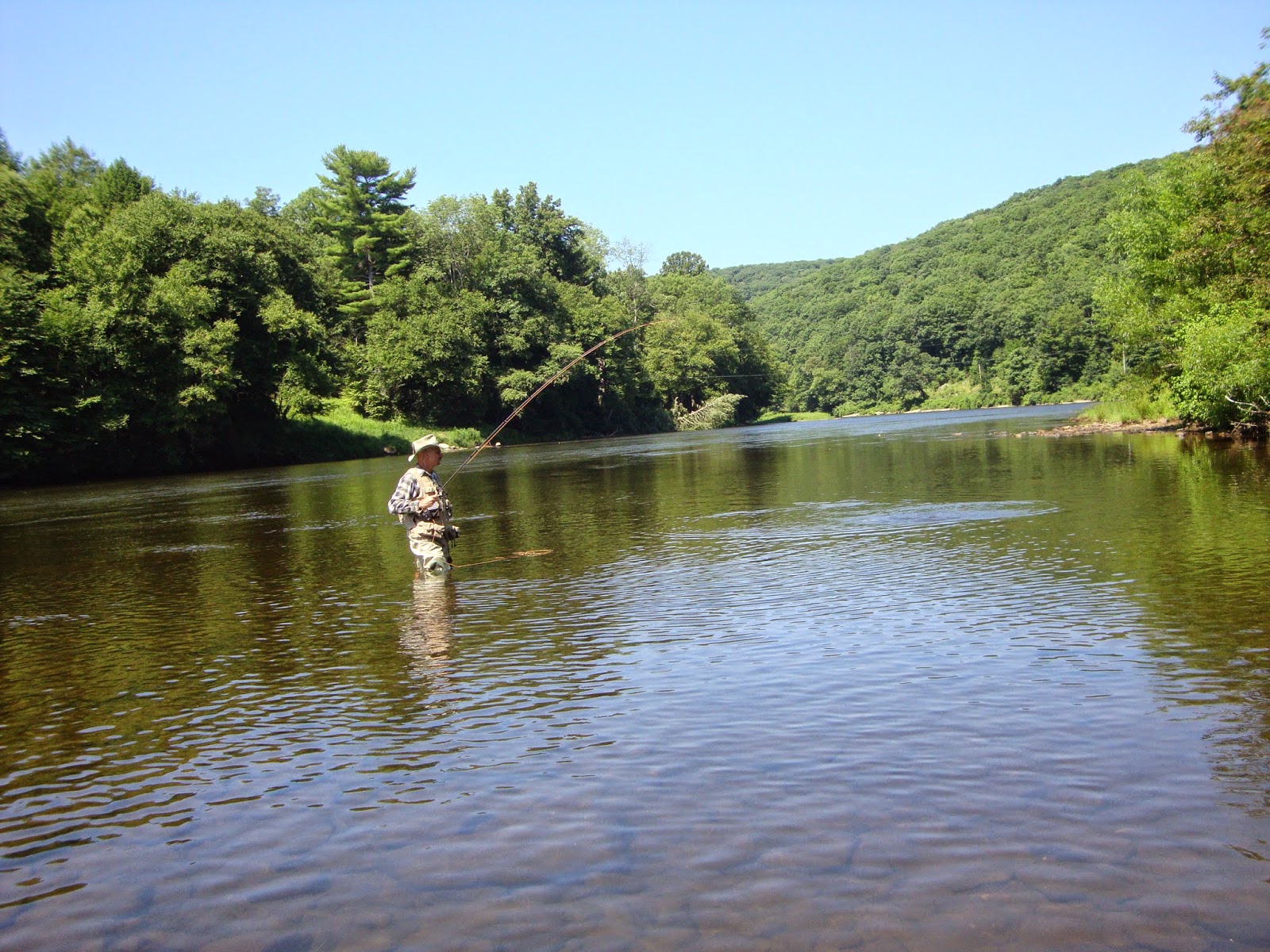 It's always a joy taking a friend, new to fly fishing, and teaching him a few tricks. I felt kinda bossy when I told Randy to stand on a certain rock and fish from that spot. The reason was that I didn't want him to get any closer to the trout, that I knew were there, and spook them. This also made him learn to cast further out than he has usually been. I could tell he was anxious as he was overpowering the rod with his backcast and forward cast right from the start. Newbie’s think they must use lots of power to cast further. Most newbie’s end up dropping their rod tip down on the backcast and starting their forward cast too soon. This will lead to problems of course and with too much force causes a backlash at the end resulting with the fly ending up only a foot or so from the tip of the fly line with the leader and tippet lying in a bundle. It took a little advice and instructions but soon Randy relaxed and got in his comfort zone.
The trout on the other hand were a bit picky. There were short gusts of wind now and than that shuffled the leaves of the overhanging branches so we decided to use terrestrial imitations on top. The sky was overcast with the sun peering out occasionally making for a delightful day. In time we got them to rise to our imitations. After the first few catches though the trout were more wary of our presence but we stuck with it. From late morning to the evening we spent making trout rise where there was no evidence that any even existed along the bank.
It was a time well spent on the river casting to finicky trout. Changing our imitations was a must to put more trout in the net. 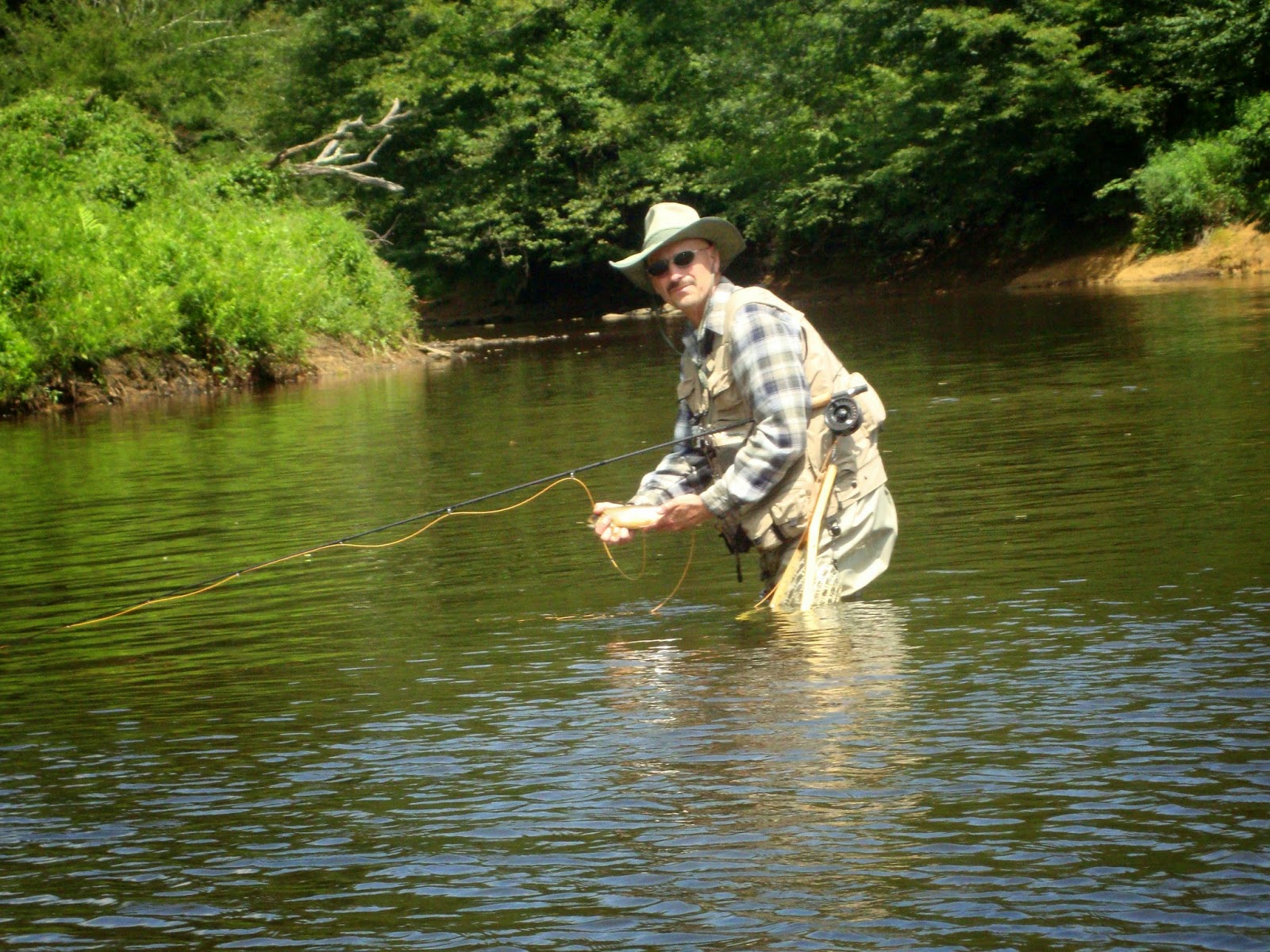 ... Randy chuckled, as he watched and commented “that should do it”

The beetle didn’t sit there more than a couple of seconds when a swirl made the beetle disappear.
“Got’m!!” I shouted. We both chuckled out loud as the line tightened and the rod flexed more into the shaft.
The trout came darting out from the undercut and I could feel this wasn’t the norm for the day. He went straight up towards the colder creek water that flowed into the river. I watched the line slice through the surface water like a sharp fillet knife through fish flesh. He gave a jolting tug before turning back towards the river. A few more darts and his high energy exertion soon slowed to a controllable calm. The beauty of a brook came to the net. 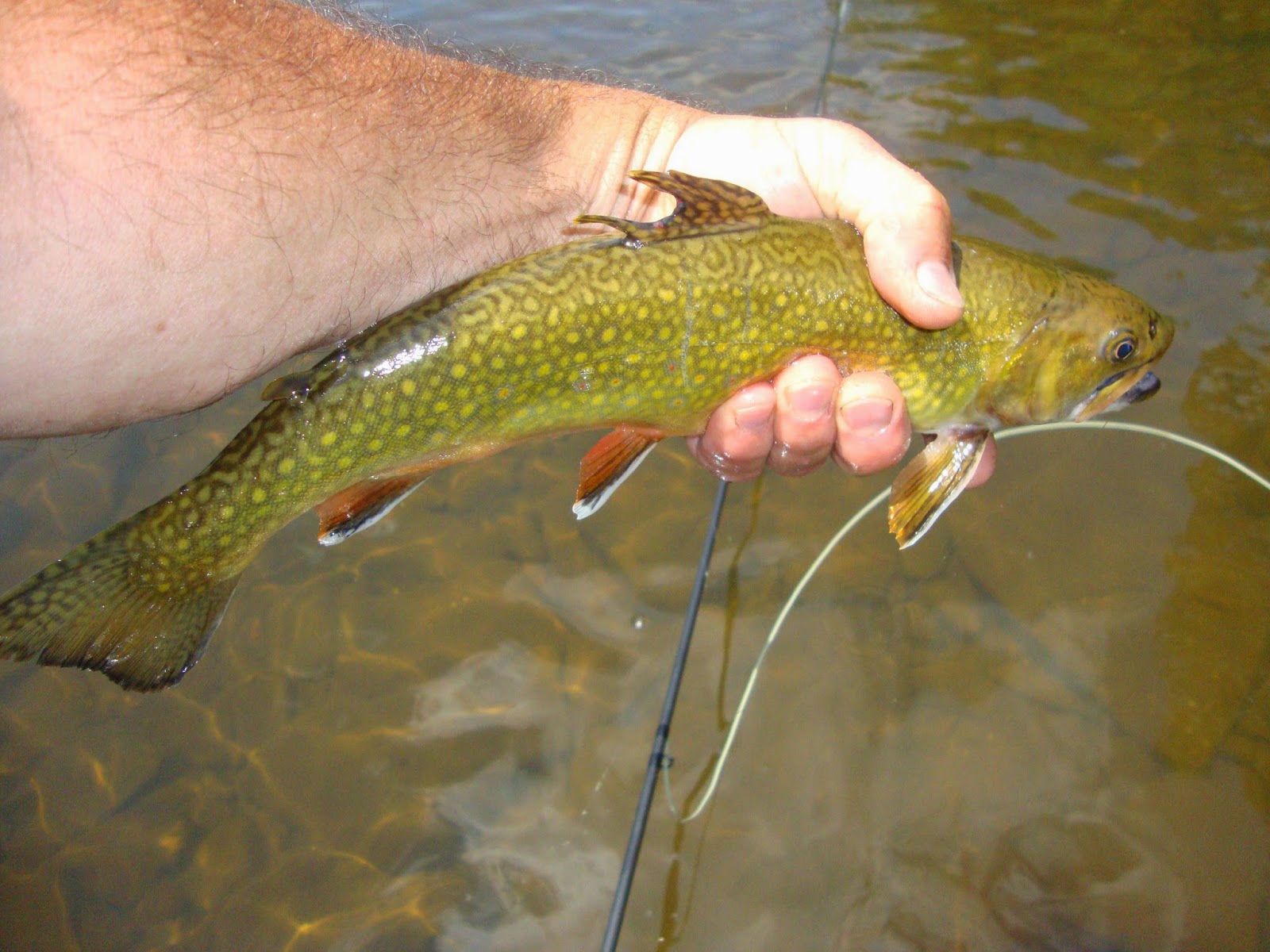 ﻿
Here's a good sample of some of the nice brook trout Randy and I caught on the dry and one on a Woolly Buggers when times got real slow.


one on a beetle 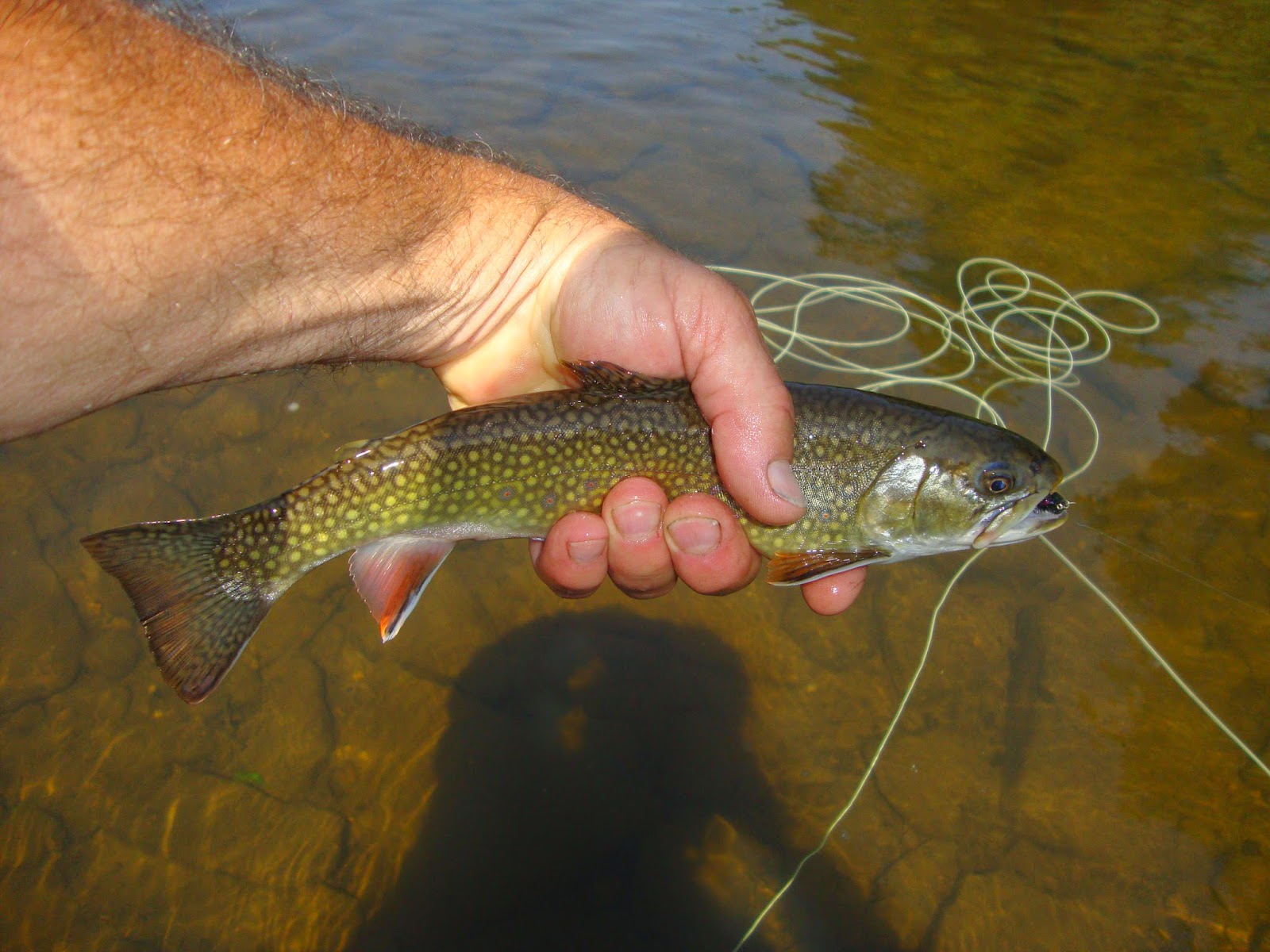 One on a hopper 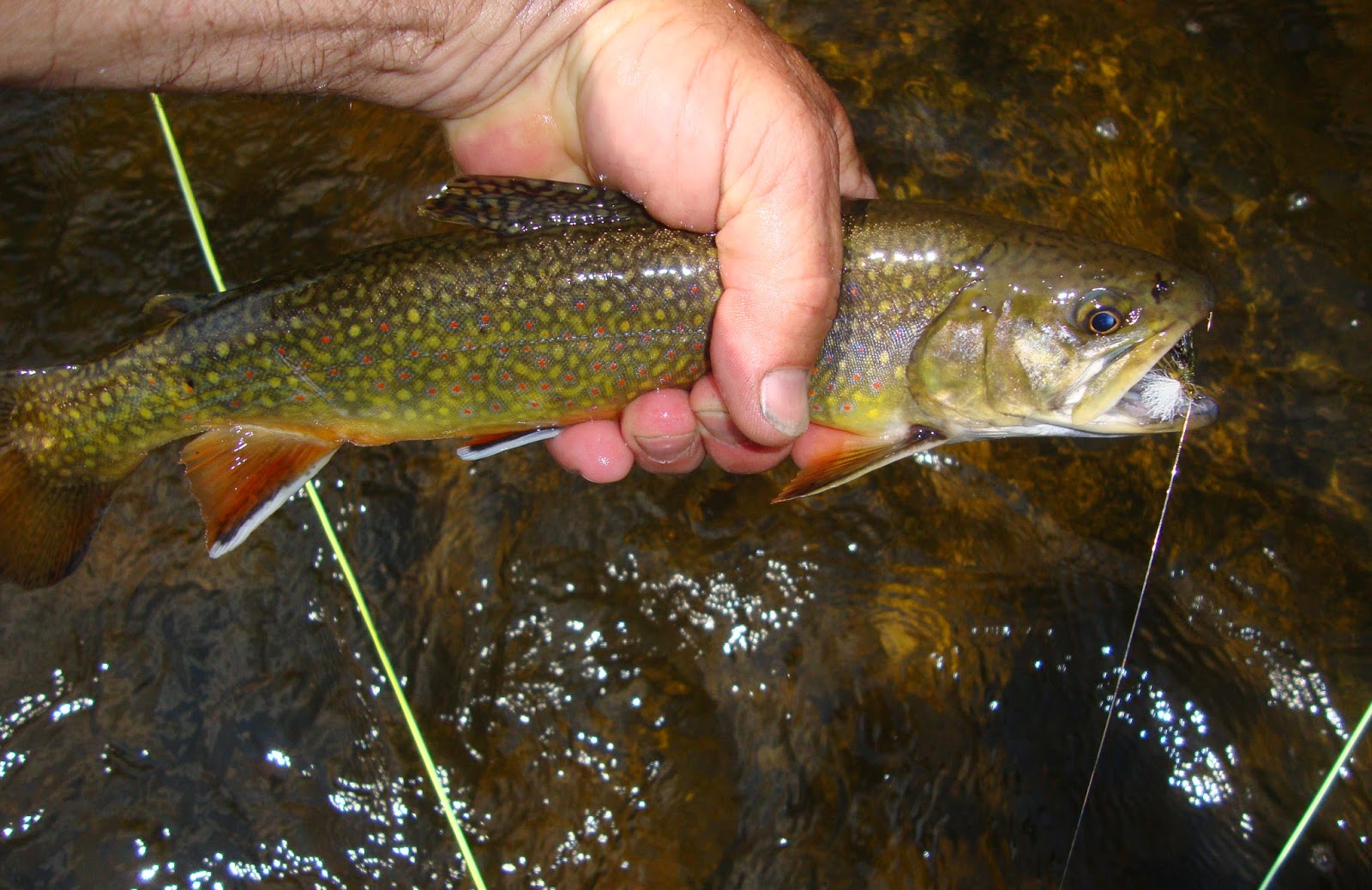 Randy showing off his catch 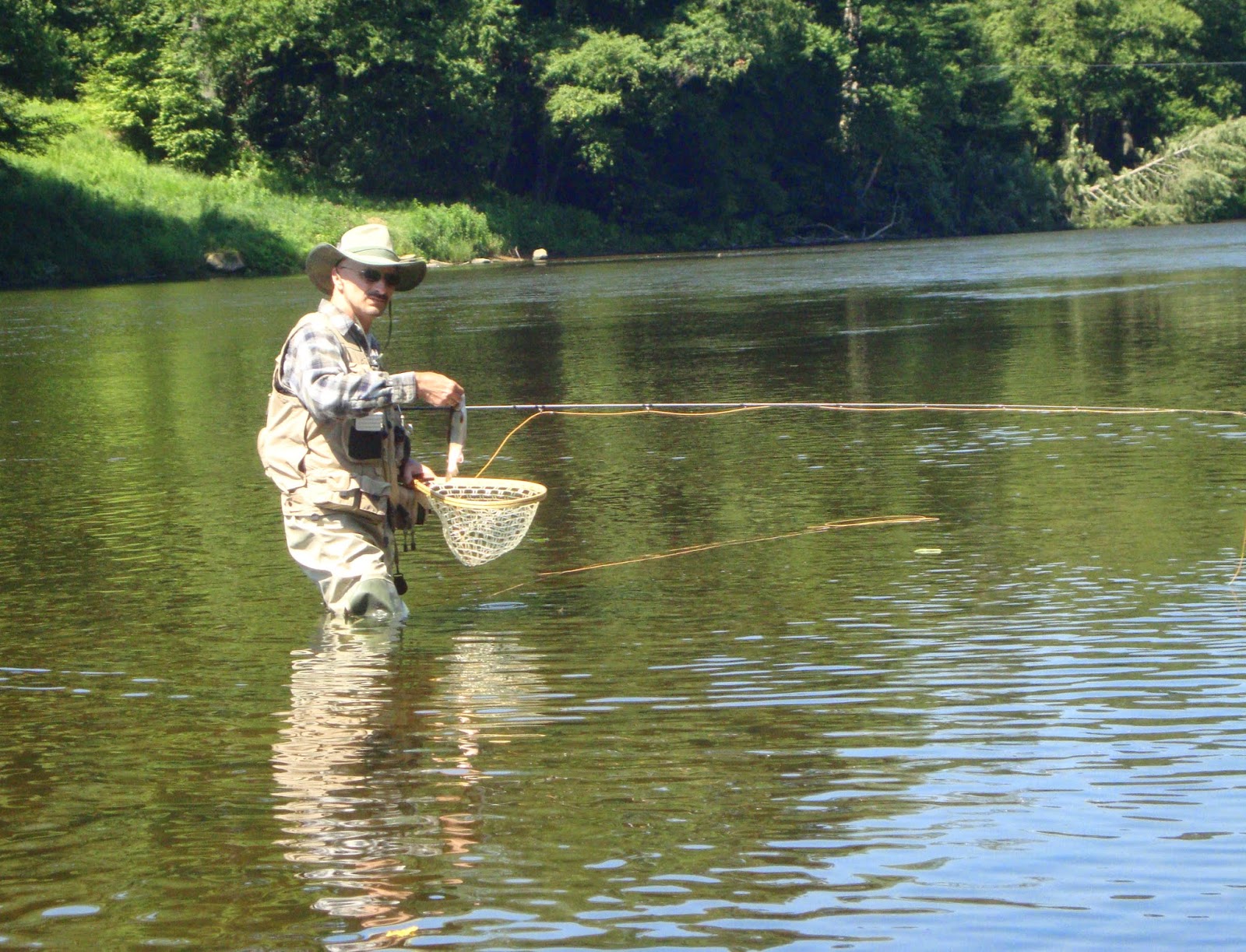 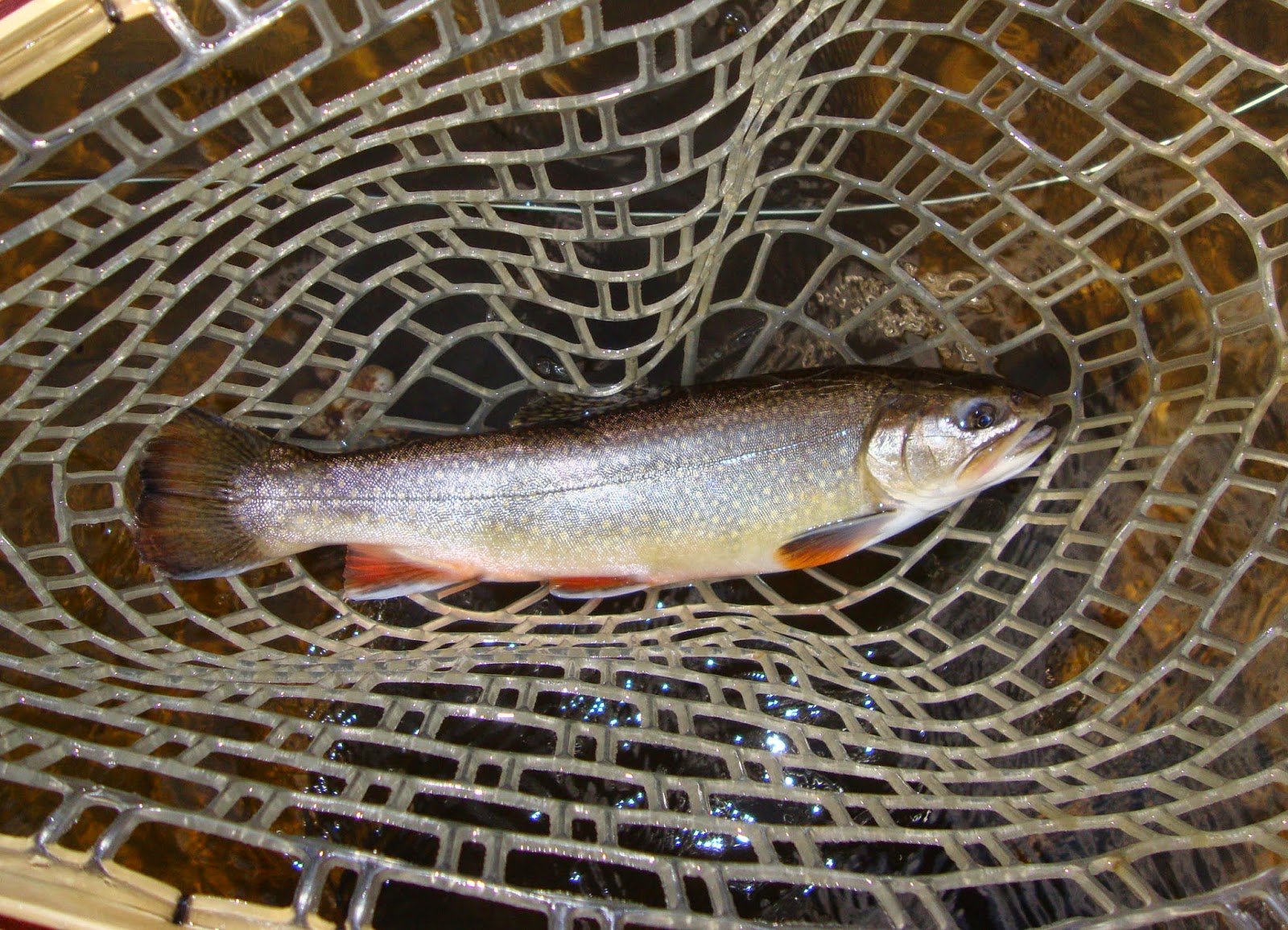 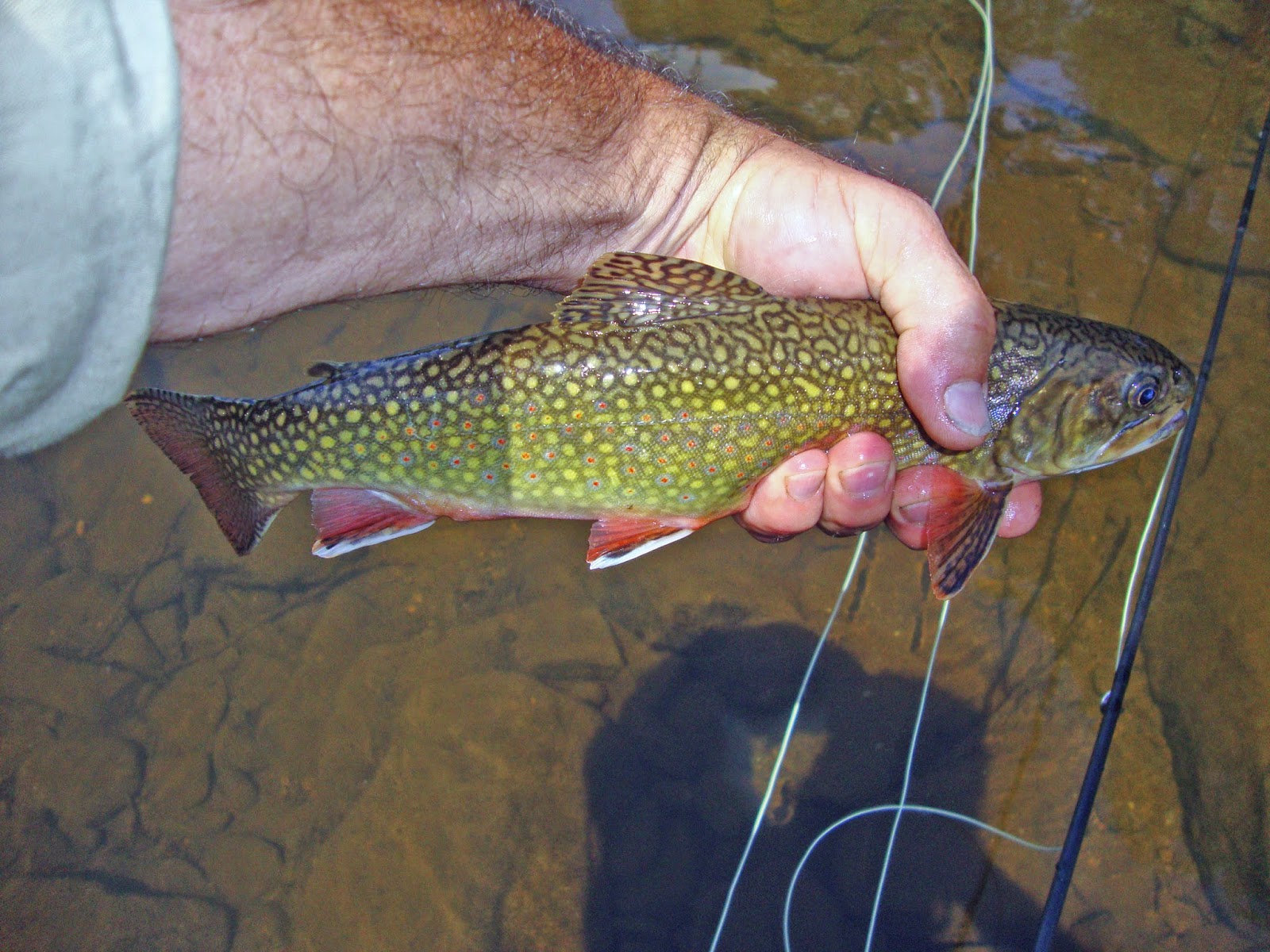 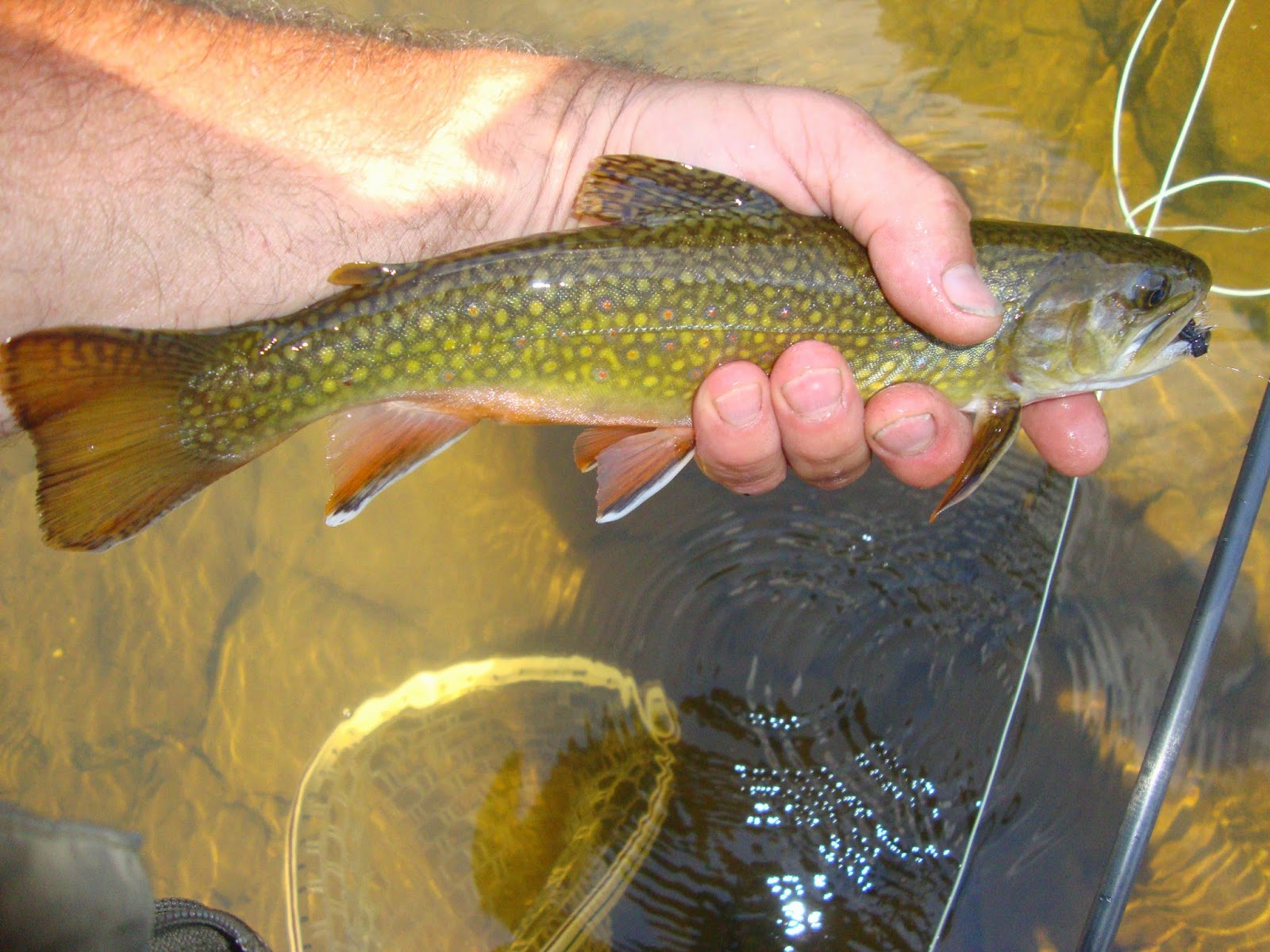 This one chased a bugger 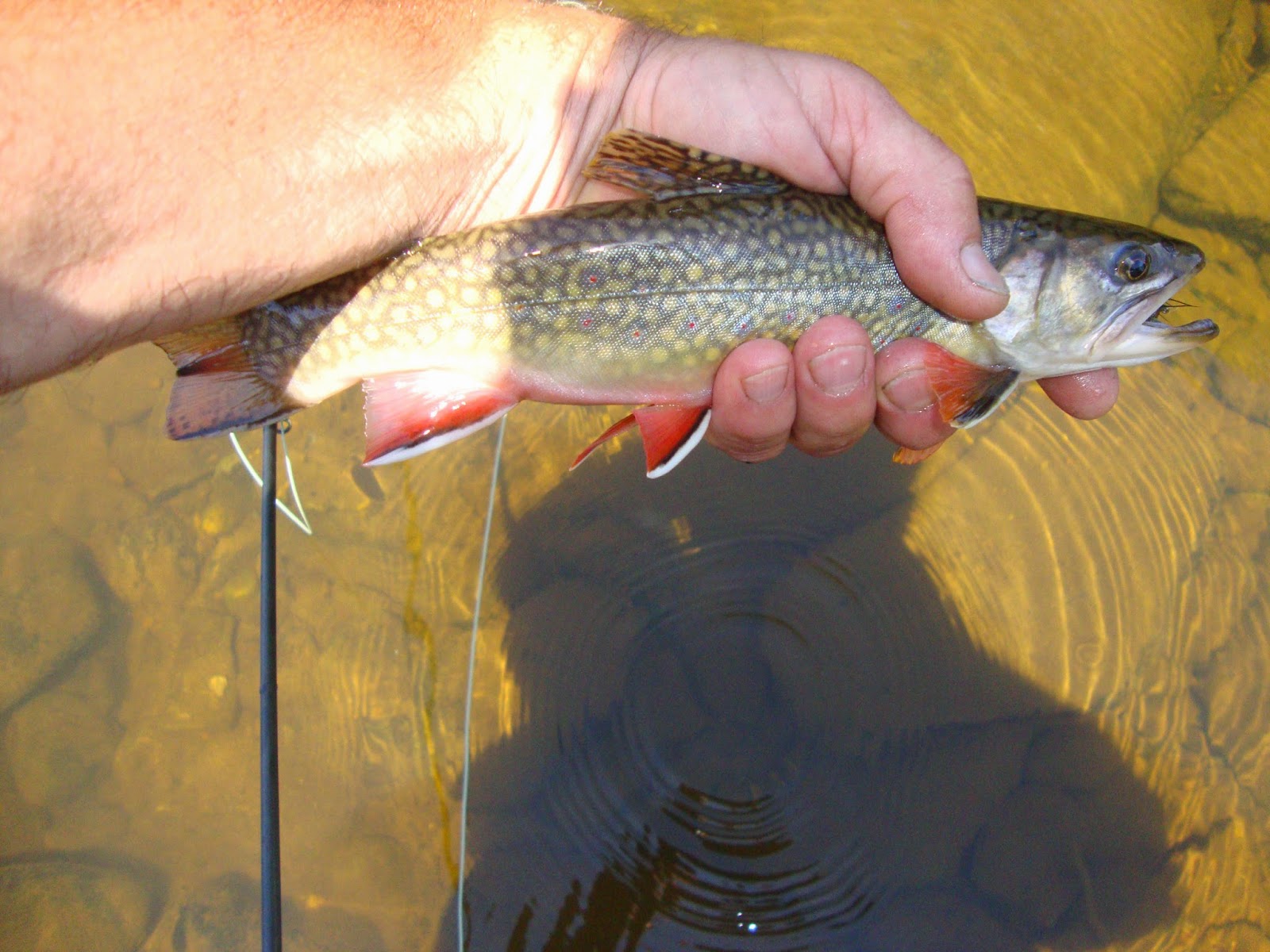 You never know when one will take a Humpy 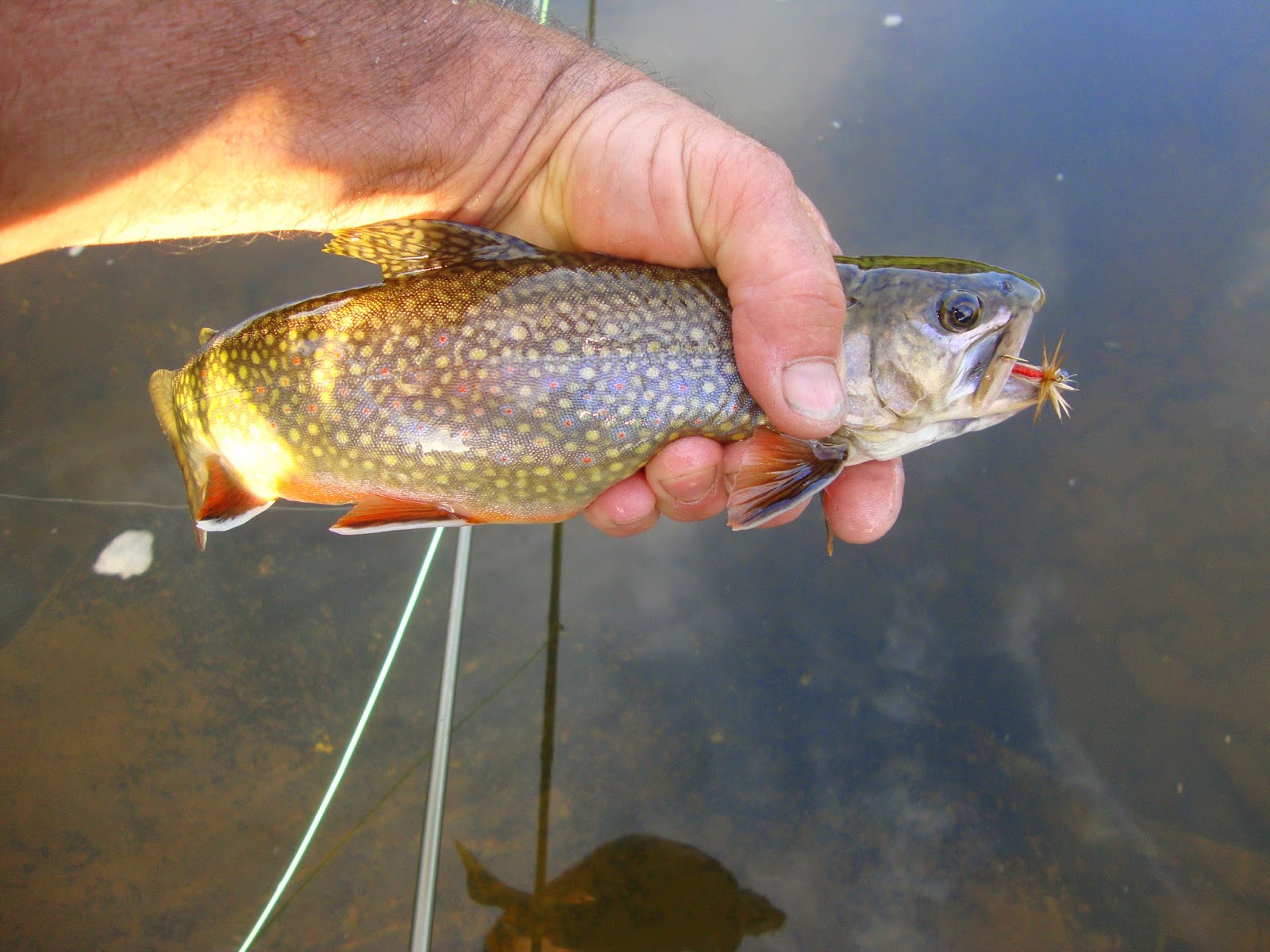 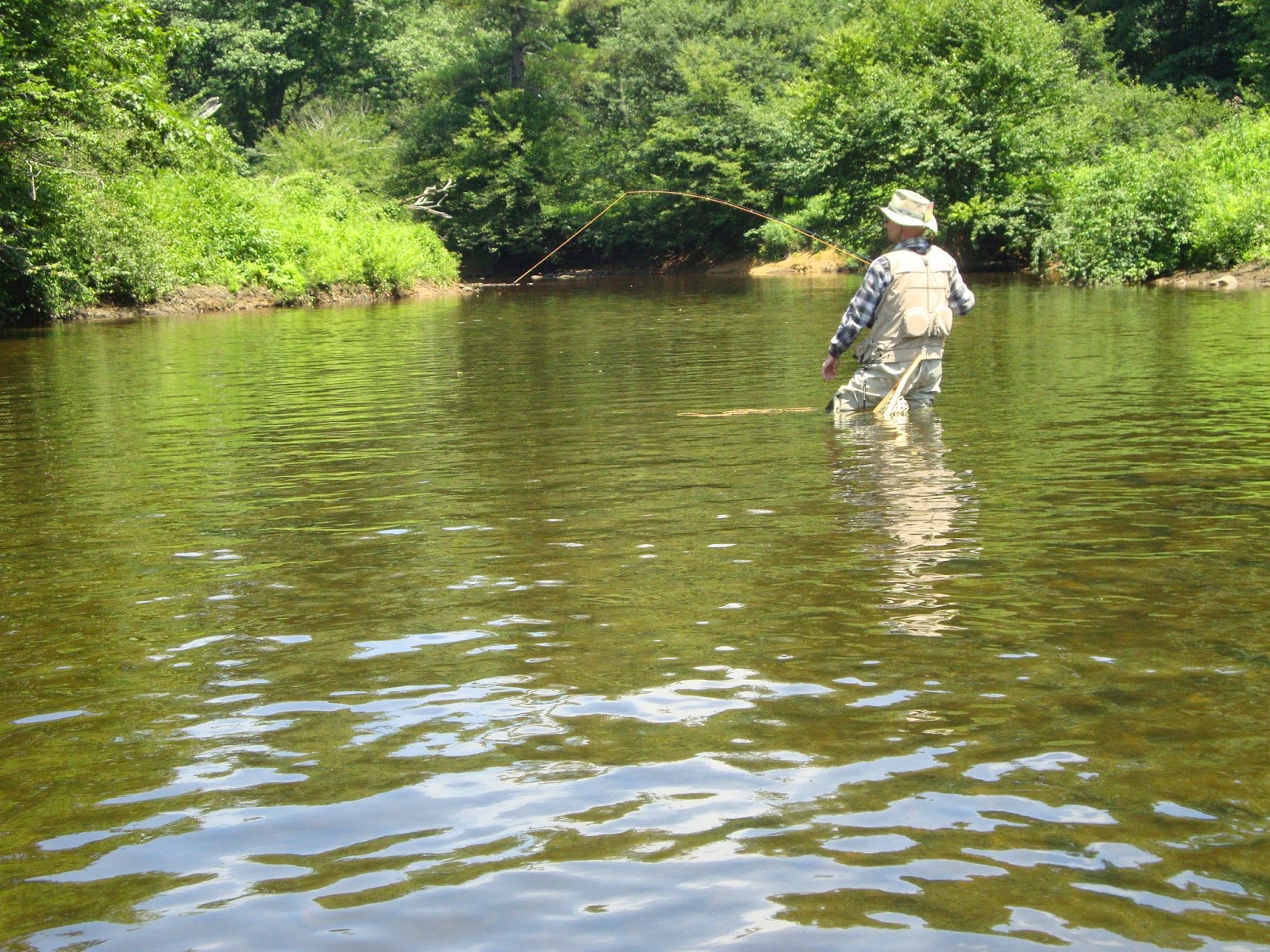