I’ve been wanting a fiberglass fly rod for fishing smallmouth in the river. Over the winter a retired friend of mine had one he was willing to depart with. I’ve been wanting to get out to try it but trout fishing, cycle riding and inclement weather conditions kept me from it. A few Sundays ago I had my mind made up, tied up some smallmouth flies and poppers and headed to the river in the morning before the so called rain fell.

I wanted to feel how the ‘Glass’ rod, a 6wt Wonderod, performed casting poppers, Clousers and Woolly Buggers. Having other ‘Glass’ rods it didn’t take any time at all to get a good feel for the 8’6” action with WF6F line. I was using an 8’ bass tapered leader of 8lb weight. To that I attached a 3x tippet. I was able to get some good distance and roll casting wasn’t a problem. The only thing was the fish weren’t cooperating with the offerings I was trying to entice them with as I fished my way down river. At least for the first couple of hours but the cigars and fishing conditions kept my attention. I knew it would only take time. 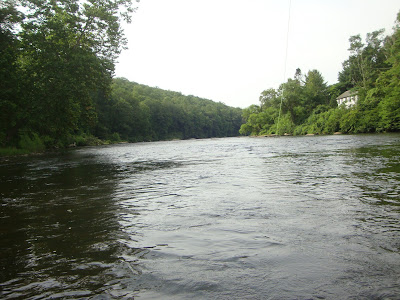 ﻿
The water was deeper than usual so I couldn’t reach near enough to the far bank as I wanted. I concentrated around half submerged boulders about and deep pools that followed. Occasionally I would cast a popper now and than in the slower pools and slurp it towards me.

I was knee deep, standing on an outcropping of large boulders mid stream, down a ways from where I parked. The clouds were moving across the sky letting the sun filter through now and again bearing it‘s heated rays upon me. Occasionally a cool morning breeze whisked passed me, from the shade of the trees, and I felt the coolness through my moist Columbia Bonehead shirt and across my perspiring beaded pores upon my arms. The lazy smoke, from my VS Vintage Select stogie, would change direction suddenly and show the winds direction noticeably. My straw hat looked comical upon my head as it appeared disfigured, in a shadow, upon my head on the slight wavy water surface.

With a #8 Brown Woolly Bugger I cast out into the beginning of a wide mouth of water that waved into a deeper pool between an outcropping of boulders. I felt a sharp tap of the bugger after it dropped beneath and than flowed with the wavy current. It was so sudden I didn’t have time to react and missed any opportunity there was for a hook set before the undercurrent swept my bugger downriver into the deep pool. I thought “if it only got a taste of the marabou tail I’d still get a shot at the culprit.” A few more casts in the wavy current produced nothing so I concentrated on fishing the depth of the deeper pool area.
I cast the bugger out to where the incoming water started to gradually slow with a mend upriver. This let my bugger drop deeper before my fly line caught the slow pool current. The undercurrent swirled beneath and started to bring the bugger back towards me as I took up slack. A slight nudge and dip of my fly line just felt right so I heaved upward to set the hook. The 6wt ’Glass’ rod bowed in an open arch towards my new partner. I felt the tug of the line between my fingers and than the rod arced down river as the big girl took line as she swam the depth. I had faith in my new used Wonderod and had the drag set on the mid arbor just right, I leaned a bit back and let her take more line. The only worries were that my line might get caught or rub against the hidden boulders beneath and cause breakage.
The fish didn’t have any trouble taking line off the spool at first. The green fly line turned yellow in a hurry as she continued on her headlong run. Downriver she turned away and began to circle back. I held my grip and took in line as she hurried up river. It was more of a waiting game for me, waiting for her to tire some before taking the lead. She bustled under the wavy current, flexing the rod in all directions, before entering back into the deep slow pool where we started this fandango.
With a grin on my face I now took charge and she danced to my lead. I had her doing pirouettes beneath until she gave up and tried to pull away. I swung the rod tip and line to the right and she followed my lead. She thought better of it and than did a 180 and lunged towards the wavy undercurrent. I let her dance to my left but when I stopped the rod she slowed as the rod bowed towards her. With a quick upsurge in the water column she lessened the pressure of the rod and then dove downward with more pep in her step than I would have expected after the dancing thus far. I let her have her way for a short stint and than moved the rod upriver against her will. She turned with the pressure applied and finally rose from the bottom steadily. Once she surfaced I seen her for the first time and was wanting to hold her in my hands. I stepped off the boulders into thigh high water so I didn’t have to bend so far to get a grip on her. It wasn’t long before I held her within my grasp. 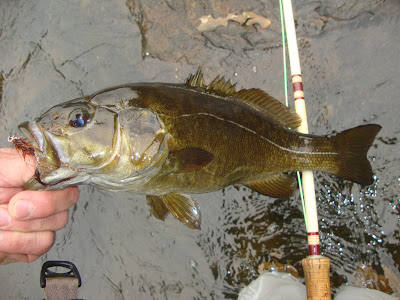 It wasn’t long after that a sprinkle of rain fell as the sky darkened. By the time I reached the roadside bank it started to rain harder. The cool rain actually felt more comfortable than the hot sun rays I put up with earlier.

At my van I changed out of my wet clothes and leaned back in my captain’s chair. As the rain tapped upon the van roof I fell asleep in no time. I awoke to an afternoon cloudburst and sat contemplating what to do as I waited the storm out. Feeling hungry I started the 318 and made my way towards Marienville…with a La Perla Cameroon Figurado between my lips.

It only took one smallmouth to tell me this 6wt Fiberglass rod was just what the dance instructor wanted! 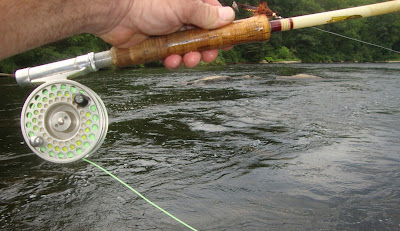