a fly, a fish and a reflection

Fall fishing in western Pa. has to be one of the most scenic times to fish their waters.
Peaceful creeks meandering through the colorful forest of Autumn foliage. A rustling of scampering wildlife on the dried remains.
A figure of a man in fishing attire, alone, casting a dry fly with a bamboo rod, nice an easy like.
A picture worth taking but the image is sufficient in this instance.
A friend of mine puts it in perspective from the fisherman’s point of view, the one in the picture.
.
Spent a nice day on the LM creek today. The flow was outstanding. The rains brought it up nicely for a good fall outing. I took a 7.6 phillipson peerless (bamboo) for a walk with some tan caddis patterns in tow. The Steelers were up 3-0 when I lined the rod up and headed down over the bank. Steeler sundays make for empty creeks and great alone time. I managed to coax several browns and a couple brooks to hand before I packed it in. Dead drifting a few feet then a subtle twitch and skitter seemed to elicite some violent strikes. To fish bamboo with dry flies on a fall day such as this one is truly one of those pages in a lifetime that gets the corner turned down and book marked. The color plates on each fish seem a little brighter when the back drop is fall foliage with the sun beaming through the openings. One particular take came in a glassy yet breeze rippled tail out. The angle of the sun allowing a mirror effect on the water that made the caddis look like it was riding over tree tops,on past the maples, on past the oaks, bumping clouds as it began to defy the mend. Just as the wakes began to cheat the fly, an eruption blew a hole in the reflection. My wrist reacted before my brain, I KNEW this was going to happen, I wished it to happen, I willed it. The brookie came to hand. In my mind he must have been all white like a canvas, but after bursting through the color palate of reflected sky, and the colors of the leaves, he painted himself,every spot,every line...perfect.A masterpiece laid at the tips of my fingers as I unbuttoned the fly. I turned him toward the belly of the pool and he darted back into the painting.There are only so many times that our wishes come true, and to some ,a fly,a fish and a reflection are hardly a wish but to me it defines why I angle.There is such hope when water is flowing near by and occassionally that hope becomes the purist of reality. My thanks to the artist.
____________________________________~anadromous
Posted by ~doubletaper at 9:06 AM No comments: 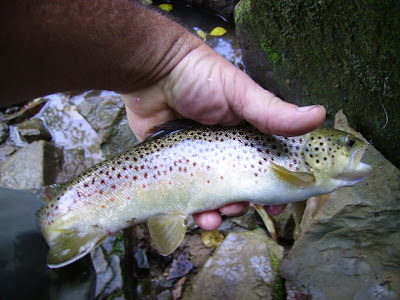 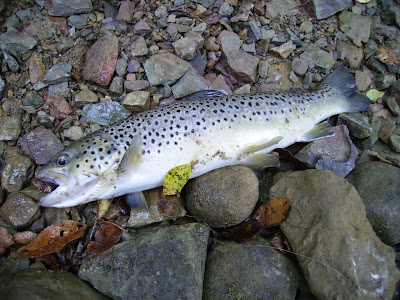 Posted by ~doubletaper at 7:28 PM No comments: