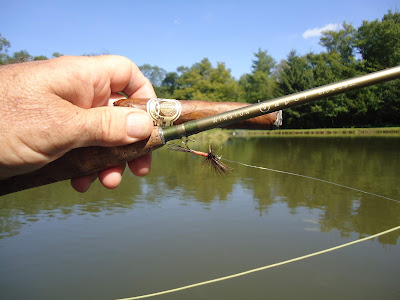 My intentions were to cool off in the 90+ weather by float tubing and smallmouth fishing in the Clarion River. The heat index was to get to 105 degrees and I figured I might as well cool off floating in the river than just wading. When I got down to the river it was high, muddy and flowing fast from the overnight storm. With the heatwave, trout fishing was out of the question but I still wanted to fish and not sweating my butt off doing it. A friend has a pond I have bass fished many times that wasn’t too far away. It is fed by underground springs so that meant cool water.
It was about 9:30 am when I got to the pond in the woods. The gray morning clouds were soon to be taken over by the rising sun. I could see in the distance that streaks of white clouds were already heading my way. The temperature was about 69 degrees already. There was nearly a breeze felt so I knew once the day wore on the temperature would rise. Hopefully I could keep my body temperature cool and stay comfortable with my body half submerged in the water in my float tube.
I looked over the pond from the truck. The trees of green encircled the pond except from where I parked. Mike kept the grass cut from the field down to the pond for easy access for a vehicle. The water was high enough that it drained through the pipe at the far side of the pond. The shallow areas now had a foot or so of water so the bass would be visiting these areas often in search of food. There were slight wrinkles that moved across the water surface from a slight warm breeze now and then. The whole pond was in the shape of a large doughnut with a grassy island near the center. For now the trees on the far side shaded most of the pond but it wouldn’t last for long with the rising of the sun.
My right shoulder and bicep was aching so I went to the dark side and broke out my conventional rod. ( Don’t be alarmed, within an hour and a half I was fly fishing.) I had taken an Aleve back and muscle pain relief pill but it hadn’t kicked in yet. I didn’t have my big bass lures with me just the smallmouth Rebel lures I use for river fishing. I had some frog poppers that I had made out of champagne corks and I was pretty sure I'd be able to cast those heavy corks with my bass rod.
Down at the pond I put on my flippers and gently stepped into the water. Instantly the coolness circled my legs. I plopped into the float tube seat and the cool water hugged me as my wading pants and sleeveless shirt absorbed the water. I had a good feeling the heat of the day wasn’t going to be too much of a problem!
In short I fished with the conventional bass rod for about an hour and a half until the pain relief started to work and my shoulder was feeling quite better. I had caught a couple bass on the champagne frog popper and even a blue gill on one of my Rebel crawdad lures before I decided to get my fly rod.
I didn’t have any intentions on fishing for largemouth so I didn’t have my usual bass fly rod with me. I did have my 6 weight vapor rod and I was sure it would do fine. I knew I already had at least an 8lb tapered leader on it for fishing smallies so I added a short length of 8lb tippet to the end. I grabbed my popper and streamer boxes and headed back to the pond.
I started with frog poppers casting near the banks as I slowly circled the pond area. Within the first hour I lost one bass trying to retrieve it but did successfully hook into and land a small one on a frog popper. 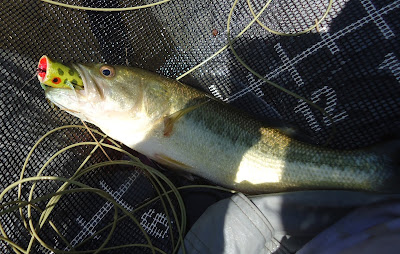 As the sun rose the temperature rose. Even so I kept cool enough half submerged that I was comfortable. The hooking up wasn’t all that plentiful in the next couple of hours. I always had a hard time hooking largemouth, or keeping them hooked, and getting them to hand. I think, being a trout fishermen mostly, I don’t set the hook hard enough. Either that or I set the hook on the first sign of the take and not letting the bass clamp down on the popper. Though it’s nerve racking sometimes when I miss a take every once in a while I get the hook set and the fight begins. Like catching a trout on the dry, it’s just as exciting watch a bass engulf a popper upon the surface water.
Come the early evening the bass didn’t appear to be that hungry for a hearty meal. Sure I caught a few small ones and missed a few more but there was long pauses in between. More damselflies and dragon flies appeared as the day grew long. They would dart here and there flying just above the surface and onto the bladed grass that surrounded the pond. At times they would dive onto the surface water and fly upward just as fast. Every once in a while I would hear a soft popping gulp as a bluegill would be taking a bug off the surface. I decided to knot on a dry fly I had in my popper box and fish for the gills. 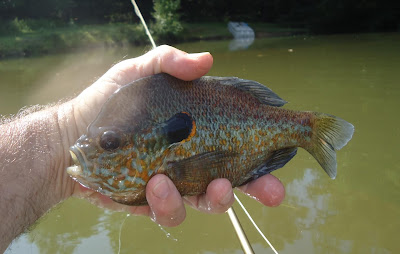 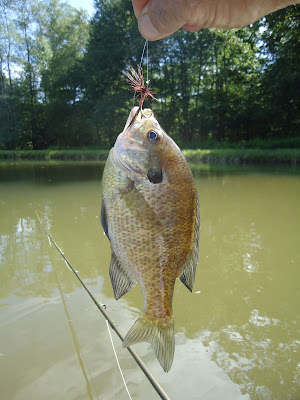 Sure they weren’t bass but I was having some fun trying to hook these fish on that big dry fly. Well, it wasn’t long before I found out that these big bass like the dry fly also. Those small gulps I’ve been hearing, that I thought were gills, might have been largemouth snacking on the flies landing on the surface.

My cast was long as the orange body dry fly was very visible as it followed the looped fly line. It touched down with a small splash and dimpled the water surface. It’s tall moose wing rose up from the surface and I watched and waited for the next bluegill to take a swipe at it. A soft breeze pushed my dry slowly across the water surface. From the distance I saw the dimple around my fly on the surface disappear in a gulp. I yanked back and the line tightened but didn’t give like it had hooking the bluegills. I thought maybe I had a good size gill until the fight was more aggressive and the fish wasn’t giving up so easy. A large mouth appeared briefly just below the surface before it turned and fought its way deeper. I knew it was a bass then so I gripped the rod a little tighter as the fish tugged and struggled with the line. It wasn’t all that big of a bass but it surprisingly took that dry fly! 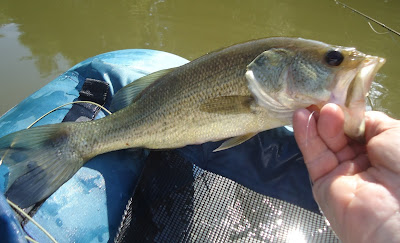 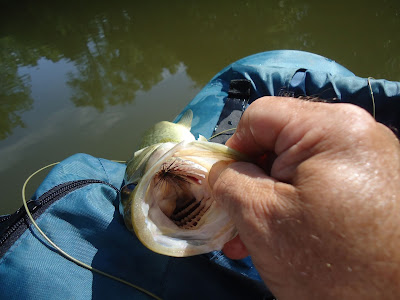 Now things were getting more interesting. Those small gulps I missed and thought were bluegills might have been bass. I didn’t nonchalantly pull back on a hook set any more. I’d give a good yanking hook set instead like I was hooking a steelhead. 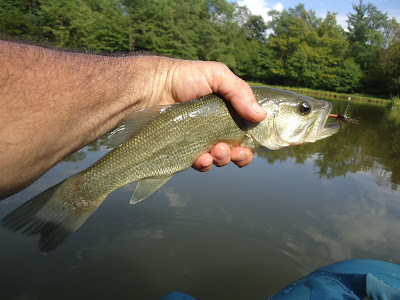 I was casting near the center island when I saw more dragonflies around there. They would dart about as if chasing each other then eventually rest on a blade of high grass on the island. There was no doubt in my mind that bass were watching them from below just waiting for one to get near enough to snag it.
I let a long cast cut threw the soft breeze and the dry fly landed just short of the island. The soft breeze slowly pushed the dry away from the bank and my fly disappeared in a vacuum like opening the drain of a filled kitchen sink. I yanked back and the top rod sections bowed downward. He pulled away towards the deeper water and I felt the float tube circle towards him. He exploded out of the water wiggling and waggling his entire body, mouth agape, trying to throw the hook. He plunged back into the pond splashing water in every direction. I held on tight feeling every thwarting tug. It was a short struggling skirmish before I got him close enough to handle. 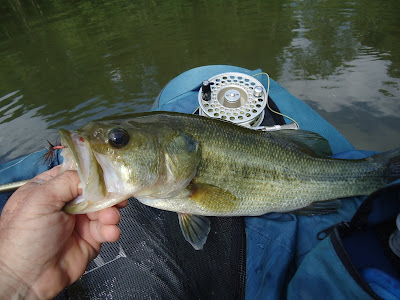 I was circling the pond casting towards the bank. I saw a few blades of grass move that were rising out of the water along the bank. Easily I finned my way out towards that direction trying not to disturb the water but close enough to make a long cast. My first couple of drops were close enough he should have seen the dry but he didn’t grab it. I made a couple of casts nearer to the grass but still nothing. I shot a cast more to the left and within a second or two he vacuumed it up like a loose feather being sucked into fan blade. I yanked back and the hook stuck. He darted out away from the shallower bank side and a wake followed. In turn my float tube turned with him and I gripped the rod tighter as if gripping a hammer ready to strike a blow. When the arced rod got into the mid section the pressure was too much and he swung around and splashed his way along the surface just out from me. I seen the fly just showing from his top lip and I was afraid playing too long I was going to lose him. I forced him to circle to my left where I could grab a hold of him while he was still submerged in the water. I was afraid to lift him too much with the rod that the fly would release. When he opened his mouth wide enough I reached down and snagged him trying to make sure I didn’t get too close to the hook. 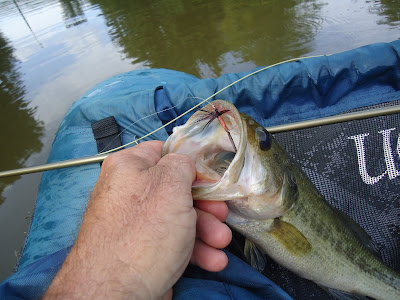 Maybe I fished another half hour without another bass that I called it quits. I took my time taking my gear to the truck and putting everything away. I changed out of my wet clothes and it felt good to be in dry clothes again. That’s when I realized how hot and humid it was outside. The cool pond water was a big relief to the outside temperature.
I finished off a Tight Line brew from Peter Straub brewery and grabbed a Prensado Lost Art cigar for the drive home. What turned out to be a depressing moment seeing the river high and muddy turned out for the best in my own opinion. 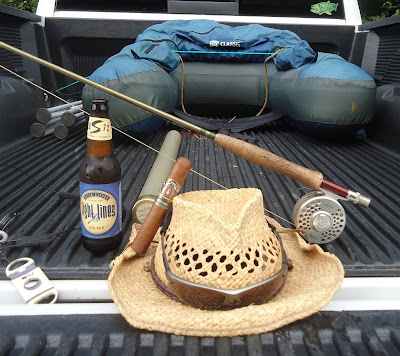