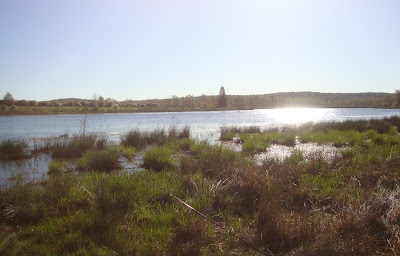 I guess I’m still like a kid with a new toy; I can’t wait to try it out. I’m definitely a trout bum but occasionally I target bass during the warmer months. Since I got a kayak last year I did a little more largemouth bass fishing than usual.  With that said I felt a bass rod was needed. Checking out cost and reputation in bass rods I selected the tournament legal MoJo bass fly rod and couldn’t wait to use it.
On Saturday I actually forfeited trout fishing and washed, waxed and changed oil in the Harley. I got other chores done that had been needing attention while my thoughts were on taking the new rod out bass fishing. The weather was to be better Sunday so I set my sights on Sunday.
It’s early May and I always felt it was still too early to be thinking about bass during prime trout season. I’ve been doing very well the past few weeks catching mostly stocked trout but getting the new bass rod changed my outlook. I even washed the kayak and got all my fly bass gear ready. Come rain or high water I was going bass fishing Sunday.
Sunday morning it was 41 degrees but the weathermen said it was to reach 61 degrees. I put the kayak in the van and headed north. The sun was on the rise as big white and gray clouds moved slowly below the blue sky. I kept a watch on the tree limbs on my way and there was no breeze that I could tell.
In the parking area I noticed the only thing I forgot was a sponge to soak up and water that happens in the kayak. I was getting warm, getting my gear together, but decided to leave my medium weight polypropylene shirt on for the trek through the forest. I put a sweatshirt in the dry bag for assurance should it get colder. I assembled the 7 weight 7’ 11” MoJo rod and attached a mid-arbor reel with what I had, a WF7F trout taper fly line with a 12lb 9’ bass tapered leader. I grabbed a few stogies, a water bottle and put the rest of the gear in the kayak. Out of the parking area I began rolling the kayak on my approximately 2 mile journey down the grown up lane through the national forest. It is mostly flat land and with my homemade dolly isn’t much of a task.
At waters edge the large swamp was much higher than I ever seen it. This was a good thing as I didn’t have to step in swamp muck to launch the kayak. Looking out towards the swamp I could see ripples on the surface. The sun shown down, reflecting bright light like looking into stage lights without the warmth. I felt a cool breeze blow by and decided to put the sweatshirt on.
Out on the open water was a complete different experience. The wind blew constantly and sometimes ferociously throughout the day. White caps appeared on the wavy current at times and smacked against the exposed stumps and standing timber out in the swamp. The sound was as if two long boards being slapped together. Paddling the kayak got to be strenuous when moving against the wind. The waves would hit the bow like an exploding water balloon splashing water into and aside the kayak.
I use a wooden handle claw hammer as an anchor. Normally the claw was all I needed to keep me from moving once it took hold of the lily roots and bottom moss. With the wind it was a constant drift unless the hammer caught hold of an underneath limb. At times I would just wedge the hammer in an exposed stump or limb to keep from being blown away. Trying to anchor in the deeper water would have been impossible so I didn’t even try.
Forgetting my Zippo, trying to light a stogie got to be a challenge. By the end of the day I figured my thumb would feel like emery cloth constantly trying to keep the butane lighter lit.
Most of the time I tried to fish the calmer water at the backside of land away from the wind. There wasn’t much of this calmer water available. Also there was a more concentration of the small lily pads which caused more hang ups. 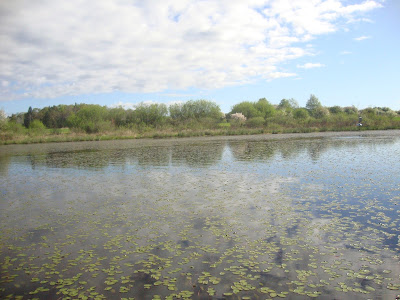 As far as catching went I felt it went fairly well considering the conditions. I cast hard and soft homemade foam poppers against the wind, across the wind and with the wind. The short MoJo rod had little trouble in the windy conditions. I’ve used my 7 weight 9’ and 9’ ½” fly rods, I use for steelhead, and I must say the short rod is definitely the better choice for ponds, lakes and swamp waters. With the short rod the popper isn’t in the air as long. If you think about this the popper doesn’t rise off the water as high as a longer rod. The action is quicker and the rod tip isn’t as soft. This all makes for quick casts and less wind resistance. There isn’t a need to make real long casts as if you were river fishing in deep water you can't wade through. I also felt i had more control of my casts.
With the lily shoots sprouting upward from the bottom fishing beneath was out of the question. I stayed with poppers and made quite a few bass rise. I didn’t catch any big bass. I figured they may have been in deeper water and there was no chance of trying for them in these conditions.
As far as how the rod handles after the hook up I can't say I could give a fair assessment as of yet. Knowing I had 12lb leader and didn't catch any lunkers the small largemouth bass I caught were no problem getting them to the kayak. I had more resistance trying to unhook my poppers hung up on a bunch of lily pads.
About 2:30 I had enough of the weather and wind. My face felt cold and chapped like riding the cycle in cold conditions against the wind for 2 hours straight. My shoulders were getting sore from paddling in the windy conditions and besides that I ran out of cigars. Paddling against the wind, to my exit point, was the last challenge of the day. Again wavy water splashed against the kayak creating sprays of wetness upon me. The cold gusts of wind chilled my cheeks and chapped my lips. My ears felt tender from the all day windy conditions.
Once aground I dragged the kayak over the bumpy field up to the lane. There I positioned the kayak on the cart and strapped it down. I took my time making my way towards the parking area. A cold beer was a quenching relief as I put my gear away and changed into dry clothes.
So much for my May bass fishing. I think that with a bass taper fly line the casting would take less effort, more distance and most likely better control especially in windy conditions. I’ll wait till warmer weather, or at least till the end of June, before my next largemouth bass excursion in the National Forest. 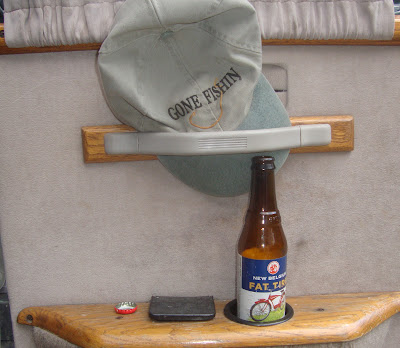 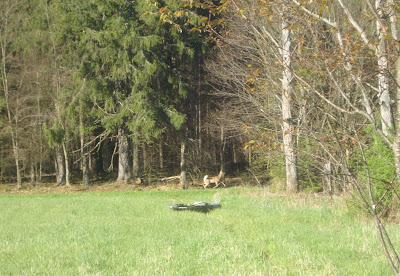 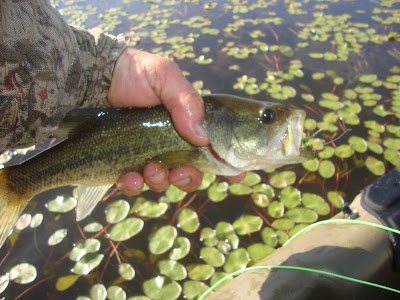 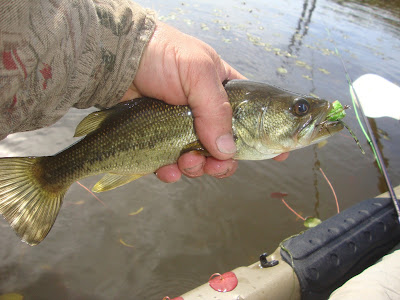 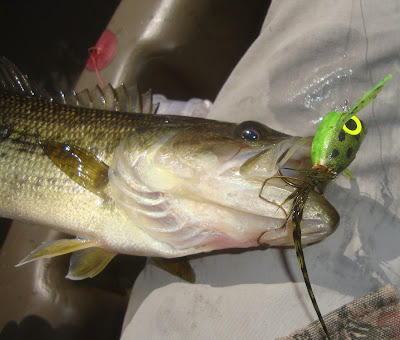 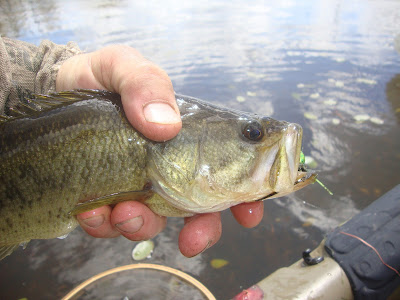 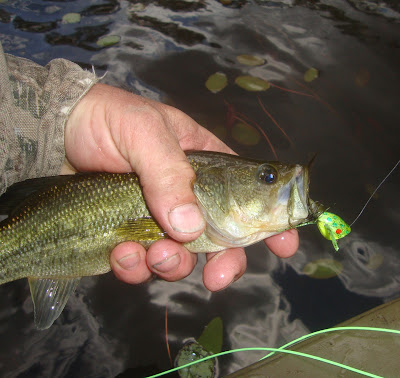 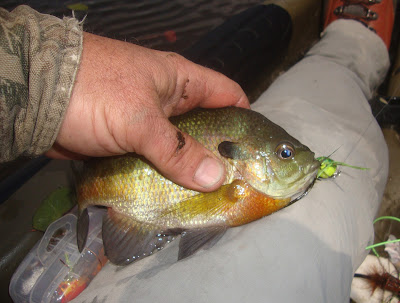 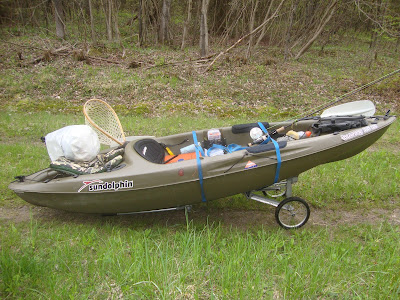 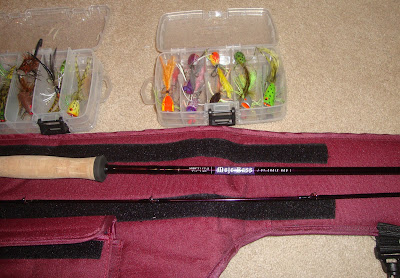 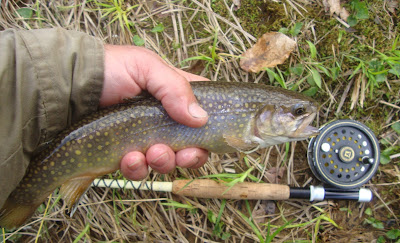 After stop and go fishing the Tionesta Creek, staying downstream from the mud line from the rain, I decided to brook trout fish in the ANF before heading home. I took a dirt road through the Allegheny National Forest and parked along side the narrow creek that flowed between the bare forest trees. I decided to have some fun and I put together the 2 piece ‘Custom Pro’ Wonderod and attached the Martin Classic MC78 reel, with Cortland Sylk line, to the down locking reel seat. As I pulled line out of the reel, lining the rod, it made me chuckle listening to the audible ratcheting clicks of the old Martin reel.
The gray rain clouds had now passed and the day brightened leaving white puffy clouds lingering above. The white clouds reflected the sun's rays down upon the forest. Looking around, the forest glistened with reflections of light off the wet blades of grass and the raindrop left on the few tree leaves on the branches of small saplings. Pine bows twinkled, from the wetness also, like small Christmas tree lights when the soft wind blew through the forest.
I found the creek had a chalkiness color to it, in the riffles, and good flow from the recent rainfall. This broadened the mountain stream and should get the brook trout out from their low water hiding places and into the main flow. With the chalky water I won’t have to make long casts, to keep from being seen, and can avoid the bank side branches and overhanging twigs on my casts.
I started wading the creek casting a Woolly Bugger to get a feel for the short fiberglass rod. I made looping roll casts most of the time but would overhand longer casts where I was able to. I caught one brook trout on a brown bugger but felt I should have had more strikes for the area I had just covered. I know very well brook trout love minnows and I had a variety of bait fish imitations to show off. Once I started the DT Triple Threat fashion show the entertainment started to pick up. I lit a cigar, relaxed a bit and continued on. 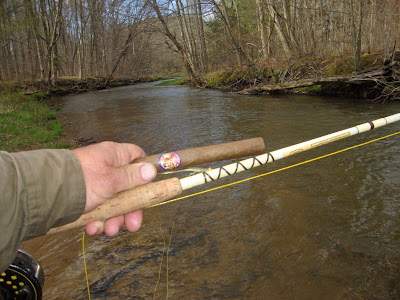 I changed colors often with or without the bling depending on the situation from dark shadows along the banks to out in the middle of the creek. In the riffles I used flashier colors to draw more attention. I had to shorten up the minnow imitations some because of the short strikes of the smaller brook trout compared to the rainbow trout I had caught in the Tionesta Creek. With each catch the brook trout darted about within the riffling water and the glass rod flexed and danced with each tug and pull.
There were a few other anglers fishing bait along the stream also. I simply went around them and continued down creek finding a trout or two here and there. They were spread out looking for a meal as I expected.
By the time my cigar went out I had caught quite a few brook trout and decided to call it a day. 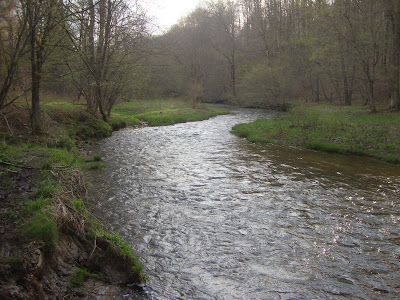 Back at the van I drank a Great Lakes Porter. The cold dark beer went down easily and was a good beer to finish the day. 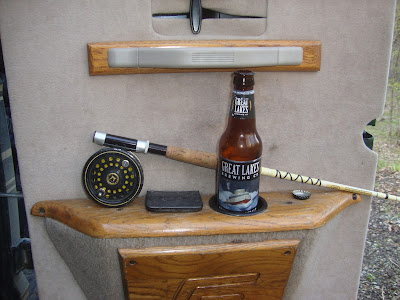 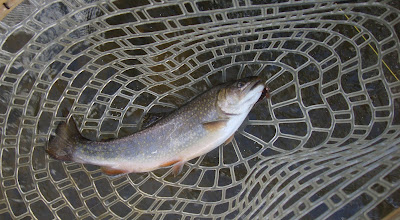 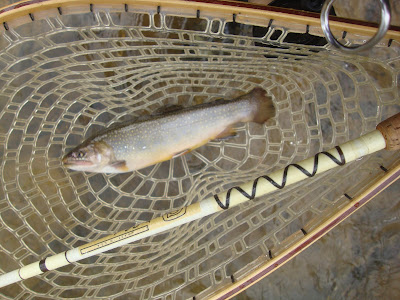 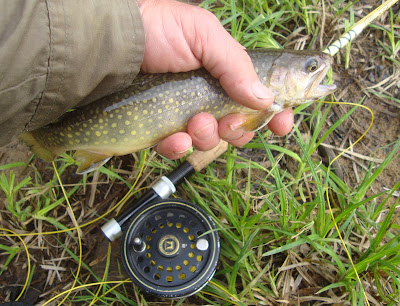 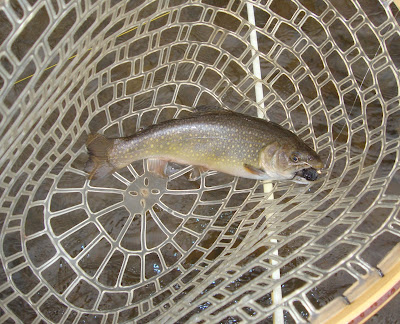 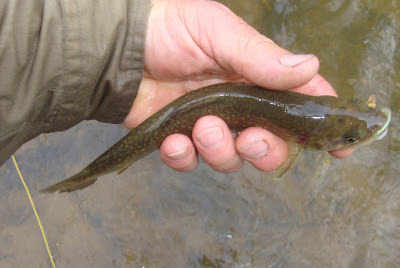