Bemused by the Serenity of it All

Bemused by the Serenity of it All

There I was thigh deep in the middle of the Clarion River puffing on a Nick’s Stick Churchill cigar. The leathery sun grown outer leaf was clinched between my teeth. The soft tobacco filler made for a good hold on the butt for a safe grip. The stogie was genuine tobacco with no additives or sweetness added. A good medium bodied tobacco flavor with a bit of natural deep spice. It was as natural as my rigid mount, 80 cubic inch, Springer Softail. No rubber mounts or counter balanced engine, when you ride it you know you’re on a down-to-earth motorcycle. When I puffed on the stogie I knew I was smoke’n a down-to-earth sun grown cigar.

The sky was a mixture of gray and white clouds. The fresh mountain air moved around me like the river I waded in, cool and refreshing. Bloomed trees lined the river endlessly casting illusive shadows from the sunny side bank. Boulders protruded along the bank, some outward towards the middle of the river, diverging the current into broken surface water.

Puffing on the stogie I cast long lines across the even flow. The floating line drifts with the current along with my homemade frog popper. Every now and again I’d short yank the end of the Vapor rod which sent a vibration along the line and made the popper gurgle with the sharp pull.

A ‘V’ twin roared up the incline roadway hidden by the bank lined trees. I kept my eyes on the popper almost daydreaming about the ride. As the popper curled and ‘V’d’ down river at the end of the drift is when the water erupted into a boil. I yanked back the long length of line and felt the end result as the line tightened and the rod flexed down river. The fish flipped his scaly body into the air in disgust as if wanting to know who it was that duped him and whom he would be doing battle with.

He fought beneath the cross current. I held the rod high as an antenna like controlling a remote control boat through radio waves. I could feel the struggle in the cork grip and tension between my line fingers. He erratically swam upriver to choppy water. As he held up within the undercurrent, I had time to reel in slack line that lay upon the surface water while I kept line tension against the rod shaft. With a tug towards me he turned down river and quickly surged with the force of the current. It wasn’t long before he gave in do to the pressure.
By now I was over the excitement of the battle. I nonchalantly played the smallmouth bass not caring if he came undone. I had nothing to prove or to prove too. I didn’t care to grip the scaly fishy body as I enjoyed my good smoke. After some more coaxing he came to hand, the popper engulfed in its mouth. 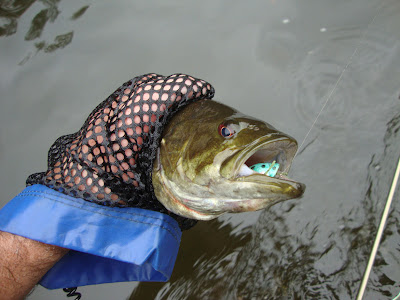 The rest of the time spent on the water was calm and relaxing. It didn’t matter how many more I caught or got away. After wading down river a good ways I pulled out a Candela Churchill and fished my way back upriver. As I looked upriver, the water took on a new dimension as it flowed towards me like a woman approaching me from afar. A burst of wind ruffled the water surface in a wave like a loose blouse on a runway model. The curves and contours along the body of water were more pronounced as was the cleavage between wet peaked boulders just below the surface. A quick current skirted above knee deep water feathering through a bush, hiding the fish I pursue. I cast my frog in temptation, a smallmouth takes it in…. 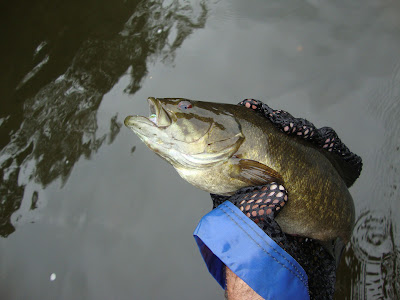 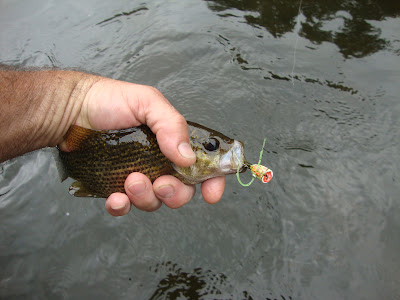 Posted by ~doubletaper at 10:33 PM No comments: