I wanted to expand my collection of inexpensive, less than $150.00, trout reels. My others have been wearing and I am looking for a new series to use. I looked into buying one from Allen Fly Fishing while their Trout series reels were at a discount price. Being I already have an Alpha II 7/8 reel from them, I figured the Trout series might be satisfactory for my taste also. I fish mostly medium streams to small brooks for trout, here in Pennsylvania, so my trout reels are mostly for holding fly line and balancing out the rod. Of course the drag is all important on those occasions of tangling with a big running trout but most of the trout are brought in with finger tension and line hand. I was never a fan of large arbor reels. They look big and cumbersome. Though I didn’t mind one for steelhead or bass I was apprehensive about a large arbor for trout but I went for it anyway.

The Trout 2 LA reel, through my eyes, looked kind of wide for my 9’ 5wt G2 rod but it did balance it out nicely. It made my SAS 8’6” 5wt rod butt heavy. After comparing the size of it to my Alpha reel there wasn’t that much of a difference in neither diameter nor wideness. The spool on the Alpha II is very noticeably deeper though. I’m not much for glamour when it comes to the rod and reel combos but treat them as a tool. If they work well together and don't feel cumbersome, I’m satisfied. It’s not like I’ll be modeling the combo for some magazine or that the fish care about the looks. With that in mind the Trout 2 reel does have a nice flair to it.

The drag system is similar to the Alpha II reel I use for steelhead. It has a multi click adjustment knob that is easy enough to adjust while fighting a fish. When fishing for average trout, 15” or less, I like to keep my reel drag set soft so I can pull line out of the reel easily when casting for distance. At the same time tight enough that the spool doesn’t free wheel when yanking line out for a longer cast. I found when I have the reel drag set, on soft, that it loosens little by little with each new cast as I pull more line out. It gets to the point the drag feels too loose and I have to readjust it. I’ve tried tightening it up a little more to begin with but I don’t like the tighter resistance where I have to set it to, to not loosen on me. Maybe I got a too sensitive reel but I just can’t find that comfortable setting for my normal kind of trout fishing.
I have a cheap 3/4 weight composite reel that does the same thing. I’m sure it became this way with all the use it has had in the years I’ve used it. The drag just got worn out.

As far as the drag on the Trout 2 goes, when fighting fish, I had no trouble with it holding tension on the fish without it slipping. I did let a couple of fish purposely fight the drag and it did keep its tension on the trout at the setting I preferred. As the fish got more aggressive in the cross current the drag let out line smoothly as the rod flexed downward. As the trout tired the drag held firm.

Overall I consider this a big water reel for big trout and a 9’ or longer rod. I would have loved to have this reel when I fished the Bighorn in Montana last year tangling with those 18” and better wild trout. I also would consider this for lakes when float tubing with a long rod. Most of the time when I’m fishing lakes I don’t usually strip the line in very close to the float tube. When I do catch a fish, when I’m in a float tube or canoe, I normally fight and bring the fish in winding line on the spool so I don’t have a bunch of line around the tube or apron. The Trout 2 reel picks up line quickly as most LA reels do.

For now I’ll stick to my regular to mid-arbor reels when I’m on small to medium size streams for trout fishing. Maybe it's because I'm old school and just like the looks of a smaller compact reel on my smaller length rods. If I ever go out West again, or fish for trout out of a float tube or canoe, I'll be sure to bring my Trout 2 reel.

You can find more details about this reel at
http://www.allenflyfishing.com/ 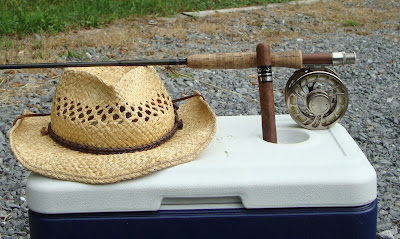