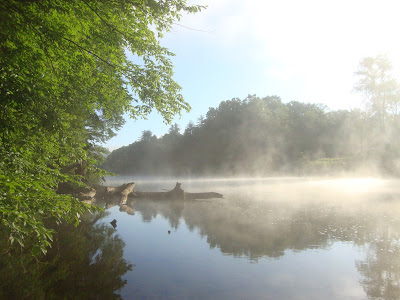 My intentions, July 4th, was to fish the Clarion River for smallmouth bass. I had a bunch of poppers and I wanted to see if I could get some smallies to rise for them. Being a trout bum I always take along some dry flies for river fishing which consists of Wulff patterns and Humpy patterns.

I strapped on my fanny pack, filled with boxes of poppers and Clouser Minnows and of course I found room for my Woolly Bugger box including Hellgrammites. I put my big dry fly box in my shirt pocket with my cigars and grabbed the 6 weight Winston. I decided to wet wade the river and headed down to greet the Clarion.
The fog rose up from the warmer river water into the chilly air. The sun was rising also above the tree line through the cotton white clouds that slowly moved beneath the blue sky. Branches full of glossy green leaves overhung the banks in places from the tall trees that lined the river. Birds were chirping, hidden in the forest, and the distant riffling of water made for a beautiful morning to be on the water. Yet untouched by watercraft and swimmers I had the peaceful river to myself. 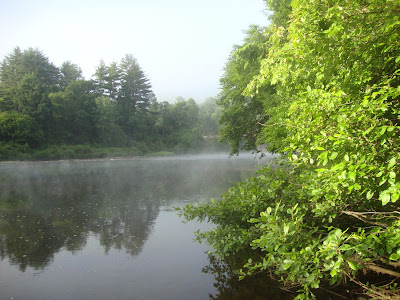 I stepped into the river and the cool water let me know that the river wasn’t as warm as I would have thought. I waded out a bit in the shin deep shallows before I stripped out line from the reel and cast the purple/gray bug popper out into the river. The past few years it hasn’t been that great popper fishing for bass but after fishing for trout all day, the day before, would be a relaxing change of pace.
In the riffles I used a couple of different color poppers as well as heavy buggers and Hellgrammites. Along the far bank I tossed poppers trying to get a resting bass to rise. The water was deeper in spots so I had to find my way to get close enough to shoot a long line towards the far bank. At times I was in deep to my waist in water as I waded looking for a submerged boulder to perch on to make a few casts to cover an area. I suppose it was an hour that passed by before I got to the far side of the river were a nice cove of slow current swirled away from the main stem of the river.
The water was shallow but there was always a chance a bass might be lurking along the bank or against some of the large boulders. The few assorted colored poppers didn’t produce any rises so I turned to the faster current and tried swimming the popper in the soft spots.
While I was fishing a fish rose down stream well within my casting range. Though I knew there were trout in the river, which came from the mountain stocked creeks, the rise still surprised me. There wasn’t a cooler mountain creek anywhere around so I wasn’t expecting any to be here. I wasted no time and knotted on a big Adams Wulff dry to the 3x tippet I was using. I doubt the trout was line shy and I figure its eyes would be on the big meal than to see what’s attached to it in the moving water. I don’t see many fly fishermen on the river so I think the trout wouldn’t be too spooky and I might just fool him.
The gray body should be easy to see, from the fish point of view, in contrast with the above blue sky. I didn’t bring any dry fly paste so I knew I wouldn’t have many casts before the pattern gets soaked in the swift current. With the natural muskrat body, deer hair wing and tail and stiff hackle it should last longer than some of my other patterns.
It’s hard to tell which way the current flows in a softer area between split faster current and behind subsurface obstructions. I was standing on a flat rock, only shin deep, so I was well above the quick current right in front of me. I studied the flow, leading to the rise, and started my back cast. I stopped my fly sharply in air so as to have slack in the fly line as it fell. The dry fell just this side of the faster stream of water, mid river, and drifted into the soft water as I intended. I kept the fly rod tip high over the stream of water in front of me and watched the Adams Wulff slowly drift its way in the soft water. Near the end of the soft water the Wulff picked up a little speed and started to drift to the far side of the fast stream of water that flowed in front of me, down river. Standing high above the water I had a perfect view of what transpired.
As the Wulff pattern swung near the faster run a flash of the trout porpoised at the fly coming towards it. I yanked back on the rod and the long length of line instantly tightened as the rod arced. After two good head shakes the trout shot towards the faster stream of water mid river. I was above the water so there was hardly any line drag putting undo force during the run of the trout. He scurried about beneath as if looking for a place to hide like a kid at an underage alcohol party when the police arrive. From above I seen his long body rush upriver in front of me and this is when I stepped off the boulder getting ready to net him. It wasn’t easy getting him in the net within the swift knee deep water but I managed. In the net he still had lots of fight in him as if ready for a second round. After a quick picture I tipped the net and he darted off. 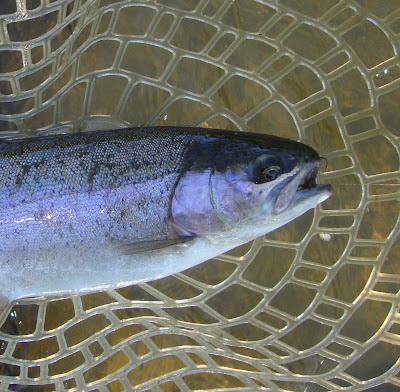 The Adams Wulff fur body was drenched. Trying drying it off with my handkerchief was useless. Grandpa always said that where there’s one there are two. I was in trout mode and knotted on a Montana Wulff pattern. After that I tried a yellow Humpy and a Royal Wulff but they got soaked quickly in the tumbling water. I knotted on an Ausable Wulff pattern. I was careful keeping it out of the swifter current as not to let it get washed under. It wasn’t long after knotting on the Wulff pattern that a trout broke surface with aggression to nab the swift moving dry. It leaped out of the water once as if to look to see ‘who the hell was fishing imitation dries without a hatch going on.’
This guy also fought in the swift current as I held the cork grip tightly trying to force him up stream. As he passed me I could see I had another long silver rainbow. 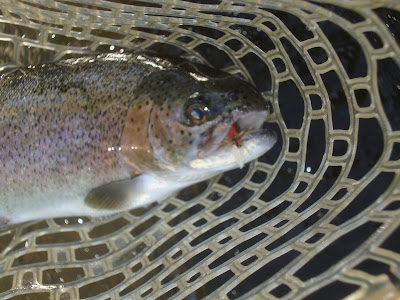 I must have spent another 15 minutes trying to get another fish to rise. After soaking a few dries I resorted to buggers and pulled in one small rainbow before giving up and heading to the vehicle.

After noon I headed down river to a likely spot I have caught both trout and smallmouth before. From the bank I lit a stogie and looked out over the water. I started at the riffles casting dries and than buggers and hellgrammite patterns without any success. Down river, beyond the riffles, was a long stretch of slow water along the far bank. Big boulders dotted the bank side landscape with little nooks and crannies between the outcropping of half submerged boulders. I found it was much deeper mid river but I kept watching for shallower spots where I could get within range of the far bank. I methodically covered the water I could reach with a popper as I carefully waded down stream. I found a submerged boulder I was able to steady myself and cover a wide range of water and also reach the far bank in many occasions. ’Just one’ I kept telling myself as I popped and fished the popper towards me.
My cast was as far as I could get and the popper fell just shy of a big boulder stretching into the river. I let it settle and than two strips gurgled the popper as bubbles formed on the surface. I stripped line a couple more times and again the popper gurgled to life. With the popper in motion it was temporarily stopped by an audible gulp and splash. With a yank of the rod the line tightened without any give. The rod bowed towards the spoiled water surface and my grip tightened around the cork. I remembered I had knotted on 4x tippet when I was fishing dries so I didn’t want to horse the fish towards me. He swam semi circles out near the far bank as I let him tire out. He surprised me when he exploded out of the water with a full body exposure. He splashed down and forced his way down and away as outgoing line spun the spool. The rod continued to flex towards the fish as it fought with strength and energy. I always said that for its size trout is one of the best fighting fish and river smallmouth come in a close second. Scooting about the smallie stayed deep and it wasn’t easy getting him towards me. Once nearer he was pretty much tuckered out and I was able to net him quite handily. I heard a voice come from the road and turned to see a truck had stopped to watch the action. He asked “how big is it” and I lifted it out of the net.
“He put on a good fight” the driver called out. 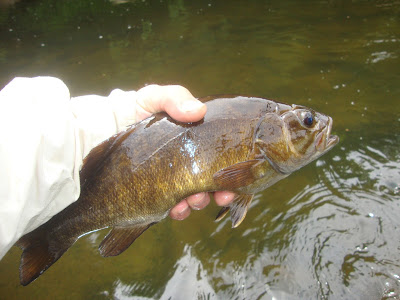 I fished another area but had to contend with two puppy lovers, three Amish swimmers and an assortment of canoes, kayaks and tubers before calling it a day.
I only caught 3 trout and one smallmouth by days end but I wasn’t disappointed with my catch. Though I did get a lot of practice casting it was peaceful and relaxing for the most part. I finished with a cold Straub Hefeweizen while changing clothes before heading to the Knotty Pines for a dozen Bourbon wings!! 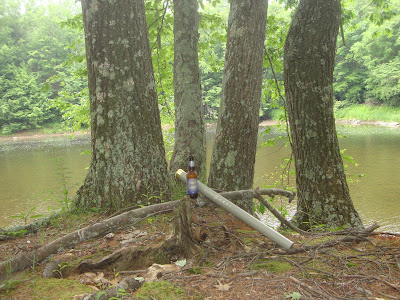 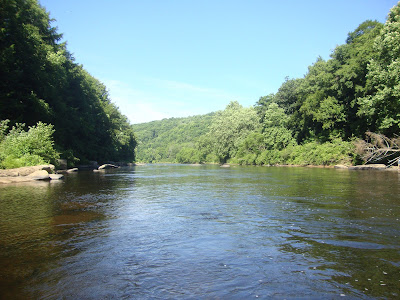 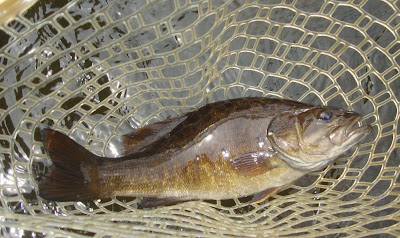