pics on the big N

I was fishing the big Nashannock last Sunday evening. There was a young woman taking pictures of me. It's not very often you get pictures taken of yourself by complete strangers, at least not I. anyhow, her and her husband were up from Texas and they were visiting the area.
I thought I'd share some of the photo's she took, pretty cool!!
thanks Janie

I title these as 'why I should tuck my shirttail in while fishing' gees, I could have been on the back cover of a fly fishing mag~ lol 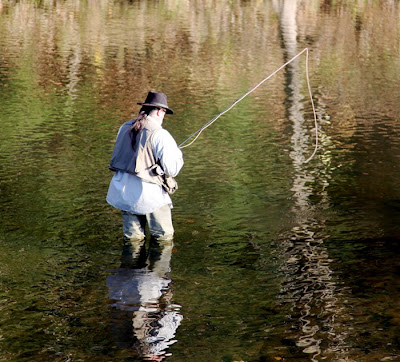 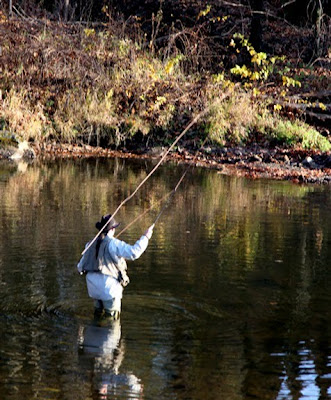 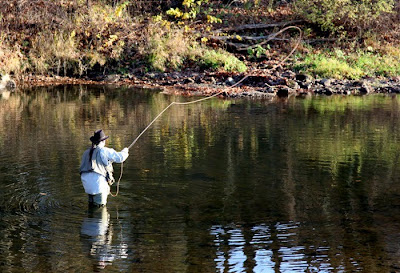 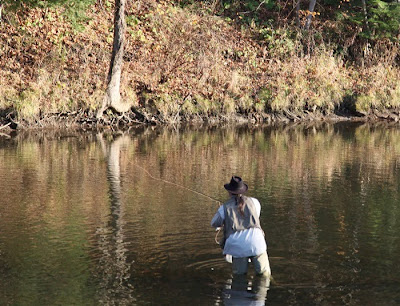 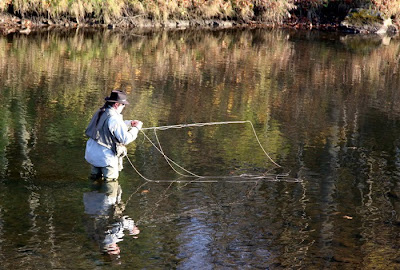 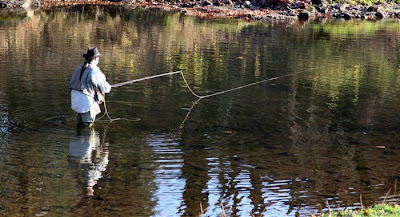 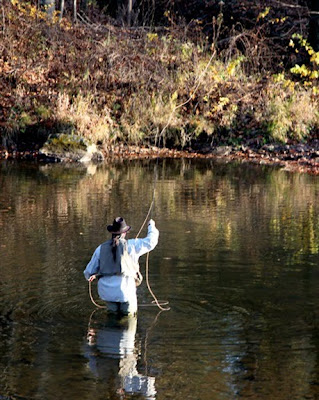 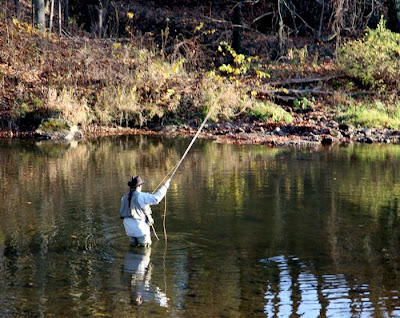 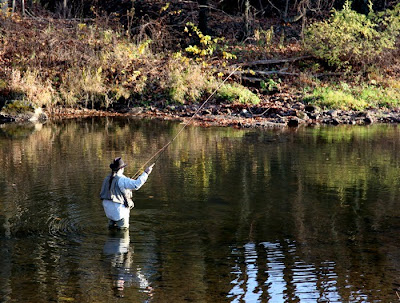 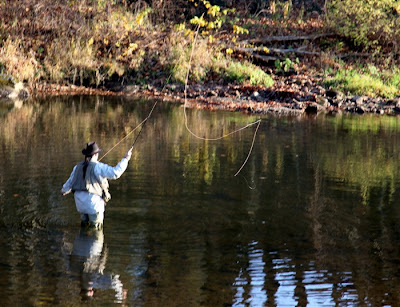 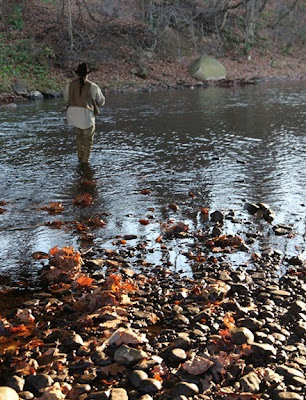 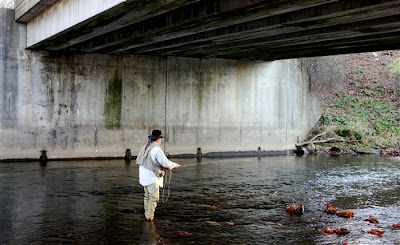 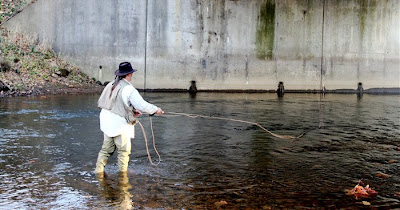 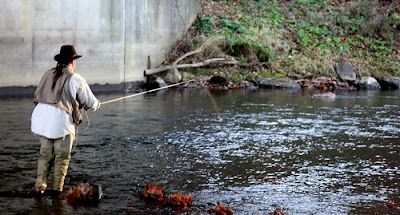 Jeremy and the Hellgrammites 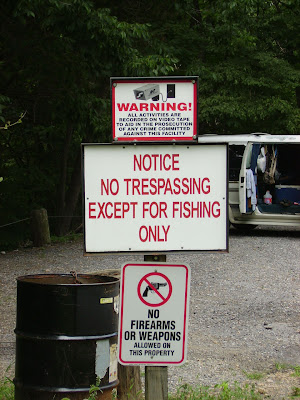 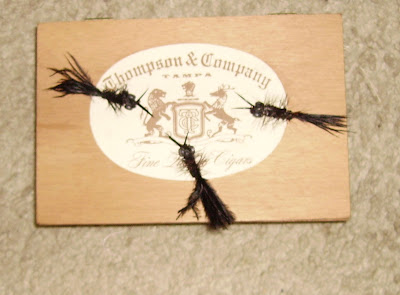 4 guys and 2 forks (part 3)
Jeremy and the Hellgrammites

After a picnic lunch along the North Fork of the Shenandoah River we got into our vehicles and headed over the Massenutten Mountains through Edinburg Gap. We followed our guide around the winding mountain roads, cross the river and ended up at a parking lot near a power plant. a sign welcomed fishermen, something i don't see too often! After gearing up we headed down the long path behind the power plant fence and than a dirt trail that lead us to the South Fork of the Shenandoah River. We stood just below the discharge water from the plant. Up to our left, a few hundred yards, water poured over the tall wide wall as the sunlight seemed to enhance the falling waters with its bright rays. The blue sky with bellowing white clouds made for a picturesque scene. The water ran swift and clear with a light green cast and warm enough to wet wade in. Three quarters of the way across the river from us, an island extended downriver beyond our sight. The wideness and deepness as the river looked was more of what i expected as compared to the North Fork.

I had my sights on getting across the river to fish the shaded banks along the island, getting there was qustionable. The others spread out along the river as i'm sure they all had their plan of attack.

First off my olive woolly bugger produced a hard take in the knee deep water just below the deep discharge water. a fighting fallfish came to hand and i lifted it for all to see and to encourage them that there were hungry fish in the river. Slowly making my way across the river, i began to get a lay of the bottom. What i call table rock, that's long slabs of flat rock, angled up from the river floor along with submreged boulders. This made for deep runs. In most places the water was deep enough that strands of stargrass and other vegetation to waver in the current which made for good cover for smallmouth to lie in ambush. Carefully shuffling and long stepping across the table rock and boulders i made my way within casting distance of the island shore. Casting a bugger or a popper or two i thought would surly produce some lazy fish but found this was not the case. The fish i caught were all in the sunshine of the warm waters.

I slowly waded and fished my way down river casting buggers and poppers around the outgrowth of small stargrass islands. Usually this produced quick strikes of any hungry smallies. The fall fish seemed to hit the poppers at the end of the drift if i let it swing to the tail end. The fish would strike at the bugger either on the swing or when i short stripped it in. The strikes were hard hits and fighting the fish through the swift current and forcing them in calmer water around submerged rock with force with 2x or 3x tippet with my 6wt. rod made for great fun.! Either way i was catching enough fish to keep me happy and confident that there were more hungry fish downriver.

Down around a bend i was able to see where the two waterways met up again below the island. Between me and that point the river widened more which made the river water just over knee deep and that made for a good outcropping of rocks that jutted out of the water. My eldest son, Jeremy, was fishing this section with a bent fly rod and a smile on his face.

Jeremy doesn't get to fish as much as the rest of us but still loves the outdoors and when he's away from home, partakes in the relaxation of fishing.

I slowly fished towards him as he stood pretty much in the same area casting around, about 100 yards down river from me. I'de pick up a smallie now and then but i swear everytime i looked his way he had another fish on! I finally stopped fishing and watched him. He roll casted a heavy fly with a forward push motion. The heavy fly he was using would splash a bit into the water and soon i'de see him rear back and set the hook. He did this time and time again. I couldn't wait any longer and kind of hurriedly fished my way within talking distance.

"After the guide showed me what to look for and the feeding zones I started to catch fish" he commented back.

"Those black Hellgrammites you tied up!"

Before going down to the Shenandoah i saw, in one of my fly fishing mags, Harry Murray's top ten flies for smallmouth. He had a hellgrammite pattern that i never came across before so i tied a bunch up for the trip..

I tied one on just then and started to fish with it. Jeremy and I were having a field day hooking up with smallies practicaly behind every rock. The hellgrammite produced some vicious strikes as it sank or skirted the bottom of the river. It made for a fun and active time for Jeremy and me as we made our way down river towards Giddeon and Jeff.

Giddeon and Jeff were fishing deep in the middle of the river below the meeting point of both waterways. There seemed to be a deep underground gorge between huge sunken boulders. As we fished with them they both hooked into something big enough they couldn't bring to surface and the fish eventually broke them off.

After 5:00pm the guide started fishing with us and caught the biggest smallie of the day, about 15", in a back eddy close to shore. As evening came upon us we had our fill and headed back up to the vehicles. Hungry and content we thanked our guide and we headed for our cabin in the woods.

Back at the cabin we opened the front door to the aroma of deer shoulder roast simmering in the big crock pot with potatoes and carrots. We sat around the dinner table like a bunch of hungry wolves devouring a fresh kill only with bottles of cold beer. Later in the evening we sat outside the rear deck and dicussed Saturday's destination with, of course, a few more brown bottles. We hit the beds tired and fatigued from our successful day of fishing!

Saturday morning we'd start off with a hearty breakfast with no time engagement to meet anyone. We would be on our own. 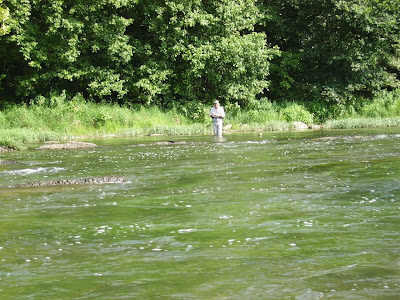 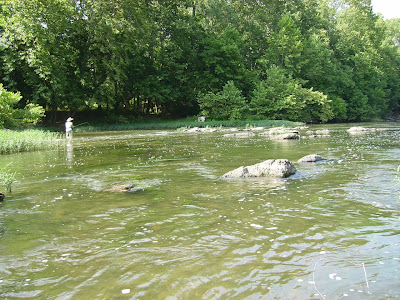 Posted by ~doubletaper at 5:59 PM No comments: