First off let me tell you that this was a replacement for my 6wt. Winston Vapor rod that broke at the top ferrule while fishing. I had got the Vapor rod many many moons ago for river fishing and pond fishing. I can only compare the Boron III to my Vapor rod in the 6wt. range. I don’t want anyone thinking I buy high priced rods to impress anyone or any group of elite fly fishermen. Winston discontinued my Vapor rod and gave me an option of fly rods at a discount price. After further review and specs of their line up the Boron III Plus appeared to fit my purpose of river fishing casting poppers, big dries and streamers for smallmouth bass and trout. My Vapor rod did all of these very well and satisfying. I found high end rods, to the extent, are lighter than the less expensive rods. If you are a decent caster a high end rod isn’t going to improve your casting without your own consciousness to improve yourself. The expensive rods are lighter so it is more comfortable fishing all day without the arm fatigue. Also I find they cast with less energy applied. This is all in my opinion of course.


The quality of the built is pure Winston. Material and looks are A1. The translucent Winston green blank is beautiful. The over sized guides and tip top I’m sure makes casting for distance a breeze. Also, in freezing weather, will be helpful and less likely to freeze up so quickly. The rod is considered a fast action, like my Vapor, so I imagined it would cast poppers, streamers and big dry flies adequately. I was surprised that, for the price of over $800.00, there was no alignment dots nor hook keeper. Hey, maybe the alignment dot guy and the hook keeper person was on vacation? I can do without the dots but I really like the hook keeper idea. The 6wt. Boron III Plus is the fresh water type without the fighting butt and I chose the wooden, Maple, insert reel seat. I would of liked a cigar shaped cork grip also but this model only comes with a full well cork grip. There’s just something about a wooden insert that tickles my fancy!


As I said earlier the rod is light. It has a soft flexible tip that I consider that ‘Winston feel’. On the water I have to admit it was very noticeable to feel the rod load. Most fast action rods I have used appear to be much stiffer and therefore not as noticeable loading the back cast.


I took it out on the river on a beautiful fall day. A few cigars made the whole experience quite enjoyable. 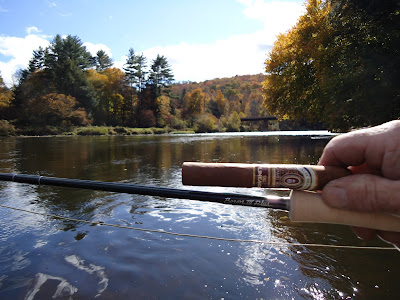 I first was casting weighted Woolly Buggers with added split shots and Clouser Minnows. The casting action was great with less energy to get the distance and accuracy needed.


Next I tested the rod casting foam and cork poppers. Again, excellent results with the wind and cross winds. The tip top shot the poppers out as well as expected. I did cast a few of my Hoppers and the seemingly weightless hoppers, casting with the 6wt., was as smooth and effortless as casting a #14 dry with a 4 weight rod. Fighting the fish, trout, was no different than any other rod of mine. 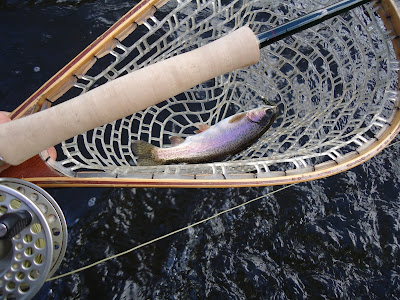 Now for the cons. The Winston Boron III Plus doesn’t roll cast weighted Woolly Buggers or Clouser Minnows worth diddly squat! Yea, that’s my experience. Not sure if it’s the soft tip of the Boron but that’s the only conclusion I could come up with. I had no problem roll casting anything weighted that I can recall with the Vapor rod. I guess that’s one discouraging thing I’ll have to deal with. Other than that, as long as I’m catching fish and not getting arm/shoulder fatigue after a day’s use, I’ll be satisfied and won’t feel any bad omens. I would consider this rod of a more medium/fast action than pure fast action. 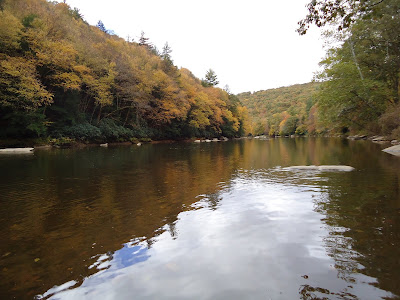