Last Skirmish of the Season 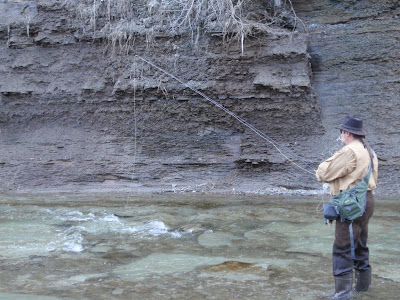 The spawn drifted, the steelhead let it drift by
the guys walked downstream
giving up on my try
I circled behind, that dark where he lay
tied on a depth ray stone
to make my last play
In a foot or so of water, no less
from behind, i casted a loop
and drifted my best
The dark moved easy, my line drew tight
i lifted my set
and that started our fight
With anger he fought, knowing he'd been fooled
we tested each others skill
as if in combat we dueled 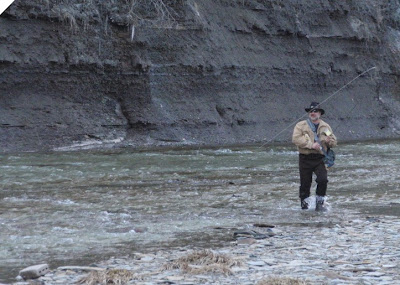 I called " i got'm" to my friends below
they looked up and returned
as we put on a show
I brought in the dark, right to my feet
the last skirmish was over
the season complete 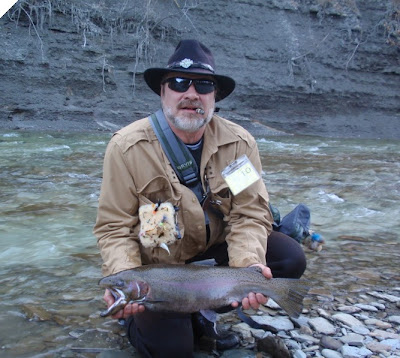 5 O’clock High
.
We met up Saturday morn and headed north to do some steelhead fishing. The snow melt was mostly gone and the rain ceased earlier in the week. We got some inside info on where to start fishing and a couple of patterns that the fish have been taking. I’ve fished in March before and usually the fish are sluggish. Most have been in the freezing water for awhile with some on redds. There won’t be as many steelies as there were in the fall and winter months though we heard some were making a spring run.
.
We parked along Elk creek and geared up. I was surprised there weren’t as many fishermen in the location we decided to fish, being the weather for the day was supposed to be sunny, later on, and warm up. I knew the breeze off the lake would blow upstream and dressing warm was still a good idea,

The morning was slow going. The water was pretty tinted and the fish weren’t visible at all. We tried all the different sucker spawn colors and nymphs. I saw less than 5 steelhead caught throughout the morning and none being very big. I never got a bump and Jim said the same. Just before breaking for lunch Kevin hooked into one and landed him. This put him on the board with one catch.

After lunch we met up with Hans and Rookie. They live up in Erie and know the streams well. They took us to a stretch on middle Elk. The water was clearer and some fish were visible but none cooperated with our fly selections. Of course Hans did pick up one, but heck, he lives up there, we expected that!

Around 4:30 I hopped in the truck with Hans and Rookie and he drove us to a section they had fished earlier in the morn. Kevin and Jim were to meet us there in a bit. Jim was determined to catch a steelhead in the previous spot and was slower getting to the vehicles than the rest of us.

By 5:00, Hans, Rookie and I were walking upstream away from the crowd of fishing drifters. We finally came upon some visible dark shadows in a deep pool and shades of gray atop the shallower slate bottom. Rookie started drifting something on her noodle rod as I stood back adding tippet to my short tapered leader. Hans watched on as Rookie fished. I tied on a piece of 5X fluorocarbon and picked out a Depth Ray Stonefly and knotted this to the tippet. Being able to practically see the bottom I figured out the depth and took off the indicator I was fishing with earlier and stuffed it in my pocket. From the bank I casted out and mended line upstream from the dark shadowed steelhead in the deeper section beneath the current flow. On that very first drift through, my fly line tip sank and I lifted the rod and set the hook hard on the unsuspected steelie. My forearm muscles tightened and my hands, on the cork handle, gripped tighter as the rod flexed downward and pulled with the silver steel. The reel spun and clicked like a baseball card against spokes on the banana seat stingray bike I rode when I was younger. Line zipped through the rod eyes and I palmed the reel to slow the fish down. My body came alive with excitement, again, after the long lay-off of fighting these steelhead since last December. With the palming pressure the steelhead surfaced, splashing and throwing itself back into the shallower water. I thought I was doing well but the fish surfaced again, shook, turned and the hook and line fell to the water surface.
“Quick release” I said to the two watching.
I really wanted to land the fish but feeling the first fight of the day was rewarding enough and became just a taste and sample of things to come.

Posted by ~doubletaper at 8:11 AM No comments:

The Harley stood on dropped pine needles
upon the hard dirt forest floor
Moon beams shot through the upper green firs
reflecting light off the chrome fin-tail pipes
and springer front end
I remember the day
Though the month eludes me.
Sounds of creek water running through riffles
over fallen timber, dropping into deep pools
were the background music
No rock & roll, no country
Just the harmony of nature’s sounds
as tree frogs and crickets join in
along the waters of East Hickory
.
Flames danced off of split logs
giving a yellow glow of my night
A bed of deep orange wood coals
radiated heat below a small cooking rack
Frying trout simmering in a small skillet
its aroma filling my surroundings
Mixed with the evergreen scent.
A half smoked stogie graces my lips
A creek cold beer
sits on a nearby rock
My tent pitched in the shadows
to protect me from the elements
After a day of cruising and fishing
this I how my evening was spent
.
My four piece fly rod
leaned up against a hardwood
My vest hung
on a crooked limb
Light beams reflect off of chrome
Wood crackling and flickering within the fire
beneath the full moon.
The forested campsite
The trout stream
Night time campfire
A pitched tent
Frying fish
Creek cold beer
I’ll have to return soon.

A Fly Rod, a Trout Stream and a Ricola Posted by ~doubletaper at 10:57 PM No comments: 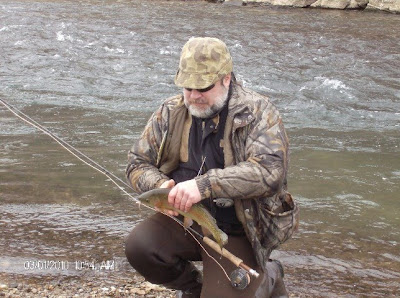 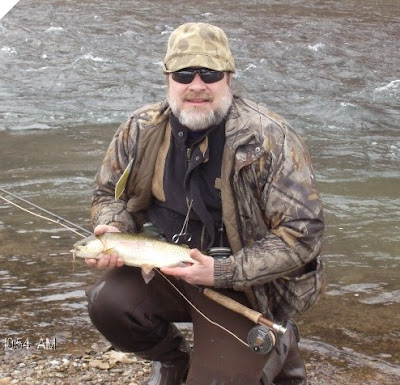 It's fun sharing a drift with friends you haven't seen for a while. here's a couple of pics of other trout caught throughout the day.
Dennis caught this 'bow' on his new fly rod built by Dave 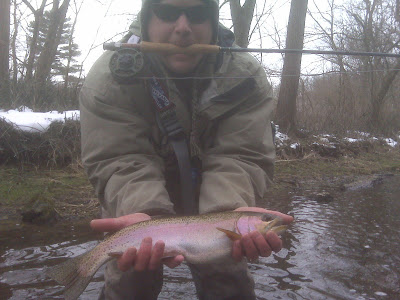 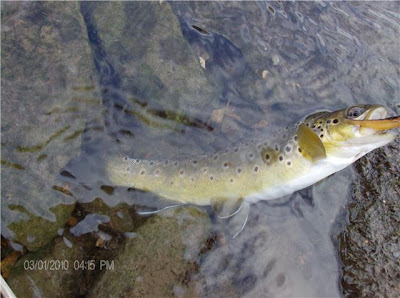 Posted by ~doubletaper at 10:48 AM No comments: