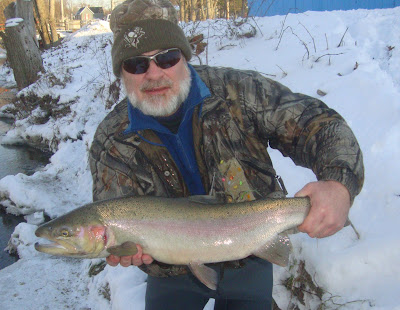 As we looked over the creek the fishing part of it looked bleak. The creek was frozen over with only narrow passages in shallow water where water flowed between the ice edges. The deeper hole was frozen solid but Joe assured me that there was steelhead beneath. In the tail out the water was shallow and the only open water was between each bank side and ice. I didn’t drive all the way up here to just find a new place to fish, I came up here to fish’m.
In the below freezing temperature it took us 3 hours of breaking the ice to open the water enough to fish. During that time we seen a few tails as we broke up and moved ice slabs from 2” to 3” thick. Seeing a few tails of steelhead kept us going.
It wasn’t long after we broke up the ice my body temperature started to cool off. I noticed my feet were getting cold and I suspected from all the stomping around made my feet sweat and now the coldness of the water was taking over. Other than my feet and hands I was pretty much heavily clothed to fight off the freezing temperature. I greased up the fly line, leader and guides with lip balm to keep them from freezing up. It was suppose to reach 34 degrees around 2:00pm but until then we might have to fight frozen lines.
With the ice jammed in the shallow tail out slowed the deeper water hole that there was hardly a flow on the surface. In fact trying to drift egg patterns were practically a non-drifting issue. With the wind, at times, would actually drift the indicator upstream instead of down. Finding this was such a slow process, besides boring, we decided streamer fishing might be a better choice to get the steelhead active.
In the next couple of hours bugger fishing, as well as triple threat streamers, brought some hook-ups and fighting fish to the surface. I didn’t have my camera because I was afraid of maybe falling in the water while breaking up the ice. I did manage 3 nice big male steelhead with hooked jaws besides a few fat females. Joseph caught a few also. Before we took a break, and Joe went for some coffee in town, I figured I went 6 for 7. Wasn’t a bad reward so far after the 3 hour break up ordeal.
While Joe was gone I went up to the truck to get my camera. The outside temperature was warming up a bit and I took the time to add some much needed leader and tippet to my line. Though it was still cold it was obvious, since we’ve been out here so long, the air temperature was above freezing. Continuing fishing the guides weren’t building up ice which was a good thing.
The sun shined through the opening in the clouds and brightened the snow that lay along the banks. The surface water reflected the sun rays and the ice glistened with sparkling effects as the translucent clouds passed below the sun. Now and than a breeze would feather by and the smoke of my stogie would whisk away a little quicker. Shadows formed on the water with the sun behind us. If anyone walked behind us on the bank their moving shadows would spook the steelhead and they would be seen swimming around for a bit till things settled back down. It wasn’t sight fishing by any means but sometimes swirls in the surface water would give up an idea where a pod of fish might be. There seemed to be two groups of steelhead that stuck together in the big pool. One group seemed to like to hang out in the front of the pool where Joe was fishing and another group appeared to hang out in the rear of the pool where I mostly was fishing. We were surprised that it was only us fishing the water most of the day but I would imagine the cold temps and anyone that knows the creek figured it was frozen over and no fool would take the time and effort to break up enough of the ice to fish. Wrong!!

By the time evening came upon us we managed a few more fighting steelhead before calling it quits. Joe didn’t live too far away but I had a 45 minute to hour drive to my daughter’s house where I was spending the night. We both agreed to meet back up early Saturday morning and give it another whirl. The weather temps were suppose to be in the upper 30’s so we were hoping a little more ice would break up and give us some more available water to fish.

A couple of Fridays catch. 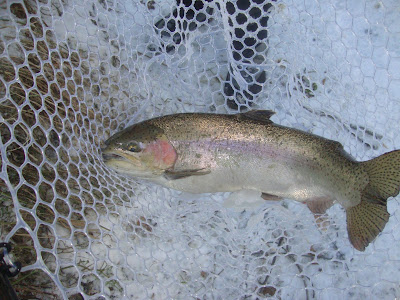 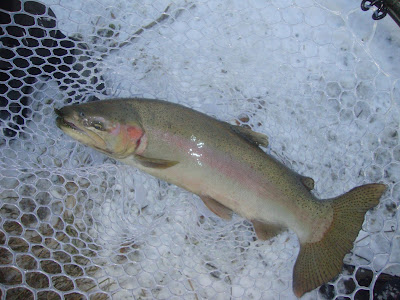 I arrived Saturday morning before Joe. There were already 2 other fellows fishing the hole with spinning rods. They said they had caught a couple of fish but they seen a few fish hiding under the ice. There was a thin sheet of ice that formed on the surface water over night butting up to the thicker ice slabs in the tail out. In the front of the hole there was also another thin layer of ice. Why the two guys didn’t break up the thin ice was beyond me. It would have scattered the steelhead and make fishing to them a lot easier. Maybe they were afraid to get their waders wet? I sure wasn’t going to break it up for them. In about a half hour they got bored and left. I immediately walked in the shallows and broke up the thin layers of ice in smaller sections. I also took time to break up some of the bigger slabs of ice in the ice jam to clear a path for a better flow. I found the ice in the shallow water above the hole was still frozen to the bedrocks so it wasn’t possible for me to break it up. After that I went back to fishing. I hadn’t caught anything before Joe showed up but the sun was creeping above the tree line and I was hoping it would warm up things and get the fish active.
We caught a few steelhead early before people started to show up to fish the hole Joe and I opened up. 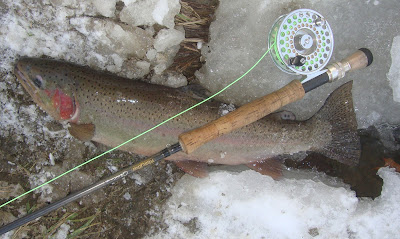 One guy, using a spinning rod, cross creek was fishing from the bank. He caught quite a few while he was chumming for them with single eggs. Any time someone walked the opposite bank or waded in the water on the opposite side a school of steelhead would move and hold in the tail out down stream from where I stood. I kept pretty much still as to not to spook them away. They wouldn’t go after the triple threat that I let drift and than strip in front of their face but they didn’t appear to be spooked as long as I didn’t plop the thing on their heads. A new tactic was needed to get one to take.
I took the split shot off so the triple threat wouldn’t make too much of a splash and cast beyond them to their left as they looked upstream. I was up creek to their right and I watched as the triple threat streamer drifted about 6 to 10 inches in front of the pod. Once it sat on the bottom I twitched it just enough to show a little movement. Within seconds a steelhead slowly moved to my offering and sucked it off the bottom. I jerked the rod up for the hook set and watched the steelhead give a hard head shake and then took off towards the deeper water. I held the cork grip tight and let the steelhead splash about tiring itself out. I was standing on the bank so I stepped into the water to get a closer angle to get the fish on the snowy bank. 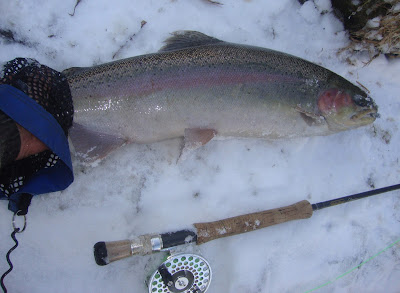 The steelhead had scattered because of the commotion but they soon returned when another fellow entered the creek on the other side. The slow drifting and letting the triple threat just lay on the bottom worked again and I had another fighting steelhead on a tight line. 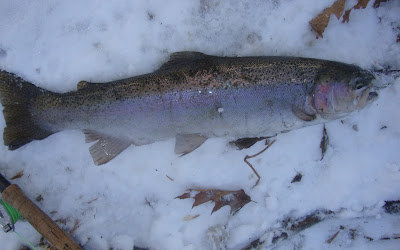 When they no longer wanted the triple threat I resorted to an olive bugger. It was harder to see in the water but I knew if it was close enough one should take notice. Watching the pod of steelhead I saw the white mouth of one opening. I waited a brief second and yanked the rod up for the hook set. The fish immediately churned up the water and the rest of the fish scattered like huge cockroaches when a light is turned on. This steelhead gave me more of a lasting fight and Joe helped out netting it for me. 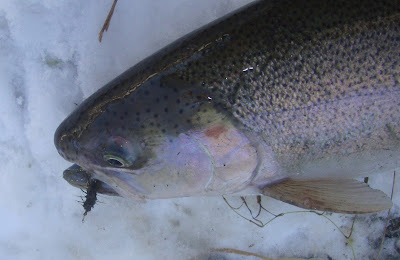 By the end of the day we put up with the many other anglers around the small area of open ice. We caught our fair share at least I was satisfied.

Some of Joe's catches. 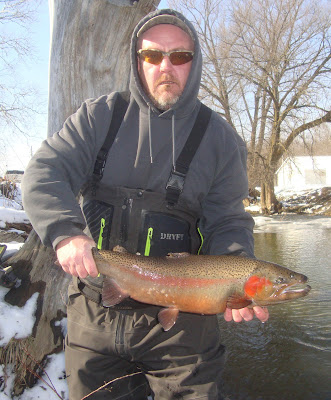 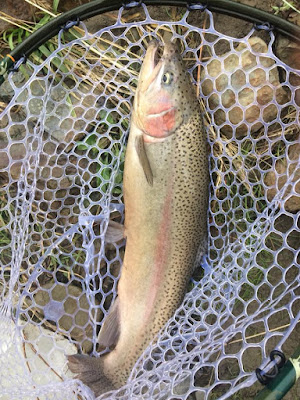 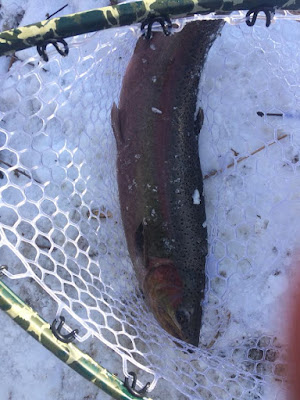 It was fun while it lasted. We left the pool to a few anglers still trying their luck. I finished my stogie while changing into riding clothes, bid Joe farewell, and headed south down the road.
I'm going to have to remember to tie up some Olive Buggers and Ghost pattern Triple Threats for Joe and I for the next encounter.

Posted by ~doubletaper at 8:49 AM No comments: