Green Man and a Sun Grown 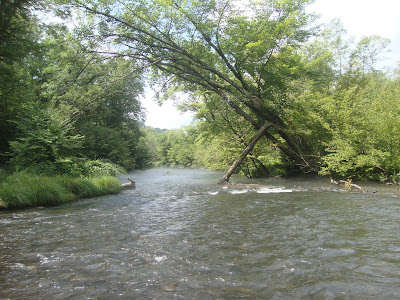 The cool tailwater flowed around my hip waders keeping my body temperature comfortable in the humid August 80+ degree weather. Fog lay upon the cool flowing water surface like pond water in the early morning during sunrise. When a breeze stirred the fog rolled off the surface water and ascended, between the banks, skyward as the sun appeared between the overcast cloud cover. It’s just before 12, it’s peaceful and the murmur of rippling water brings a quaint charm to the river. I don’t see any surface activity but spent time trying to make a trout rise to my assortment of dry terrestrials and caddis. After a piece I try nymph fishing but the rhythmic boredom soon takes its toll and I return to casting dries.
I see the first caddis drifting down stream dazedly fluttering trying to get air born in the direct sunlight. A fish rises suddenly and sucks it down. I search my caddis imitations trying to match the size and wing color. Being August I select a light ginger body caddis and knot this onto my 6x tippet.
Maybe it was my 4th cast that I got a trout to raise to it. Maybe I was a little early on the hook set, upon seeing the trout rise, or maybe he was just suspicious of the body color, but I missed him leaving a surface bubble in its place.
I spent another 15 minutes fishing dries without success before the gray clouds moved in with a gusher of a shower. I hid beneath the pines till it let up and walked downstream to try another section of water.
The banks were dense with cover and overhanging pine boughs. I used terrestrial patterns more often but couldn’t get a trout to rise. I worked buggers and streamers below the falls in the faster current but still no takers. The gray clouds moved in again bringing with it another rainfall that splashed the surface water. I waded out towards cover hoping the rain would soon pass.
Upstream I stepped off the bank and stood in the drizzling rain. I noticed a few more caddis about the water which got a few trout actively rising for the food source. I knotted on a caddis and went for them.
A bullet head deer wing caddis drifted upon the surface behind a big boulder half submerged from the bank. The current was a bit faster and I seen a trout rise and swim downstream to intercept my imitation. This time I watched the trout suck it in and set the hook sweeping my rod tip downstream and up towards the heavens. The trout splashed upon the surface and then quickly disappeared beneath with the tightened line. A frisky rainbow gave me my first round about fight and, with confidence, I played and netted my first rainbow. 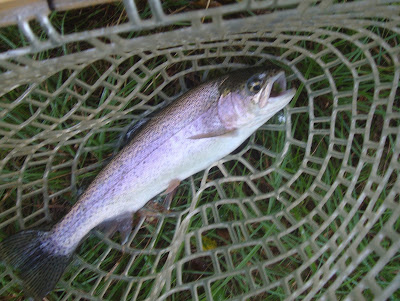 A few more caddis imitations made a couple more trout rise for a look see but there was something evidently wrong and they didn’t take. After seeing a thin grayish mayfly rise from the water I knotted on a #14 Hendrickson and attempted to catch another rainbow. I had him with, what I thought was a good hook set, but during the struggle he came undone. I went back to an up-wing caddis and produced another rise and another struggling rainbow on a tight line. 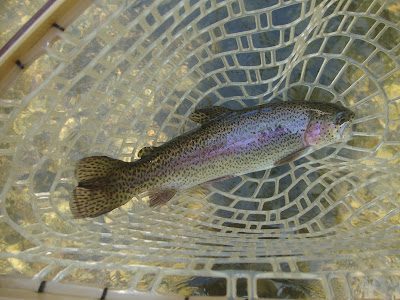 Time ticked away as it rained off and on but it didn’t seem to bother the rising trout. A couple more took the caddis and I released them into the cool water. 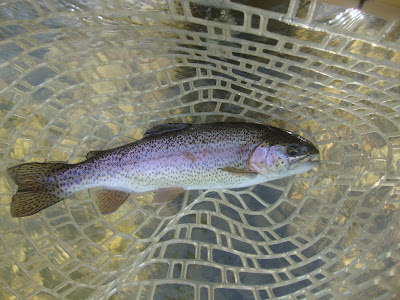 After that all surface activity stopped. I was willing to give up and headed back to my PT Cruiser soak and wet.
At the vehicle I quenched my thirst with a Green Man amber ale while I undressed, dried off and changed into dry clothes. I took out a Don Tomas sun grown for the ride. 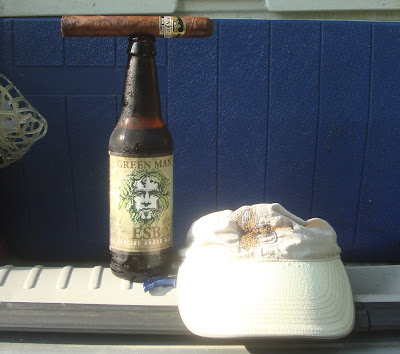 The dark tobacco wrapper burnt evenly and the long leaf tobacco inside was an extra tasty smoke during the drive back to camp.

After a hot meal and another beer I headed to the tent for some sleep. As I lay on the air mattress a drizzling rain fell upon the tent cover sounding like hot oil sizzling in a frying pan. From the leaves above, rainwater puddled and than fell in bigger drops upon the tent sounding like popcorn kernels popping in a covered pot. With my eyes closed I fell into a somber sleep.