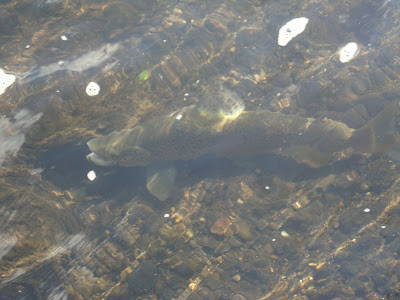 I always considered September the slow month for trout fishing. The smaller streams are low and the bigger streams the water is warm. The trout, if you find them, aren’t very active and I don’t care to over exert their energy in such warm water conditions. The local river is also warm. The past couple of weekends I waded for bass and trout but to tell you the truth I smoked more cigars on the water than I caught fish.
I had a long weekend and Monday morning I was undecided where I wanted to fish. My PT Cruiser was all ready loaded with trout gear, bass gear and steelhead rods. Checking the internet my friend, Dano, assured me that the depth and flow of a tail out river would be fishable. It didn’t take any time at all to take my cup of coffee to the Cruiser and head North West for some cool water trout fishing.
After about an hour drive through the morning fog I met up with Dano along the dead end road next to the river. I got my gear together and seeing that there wasn’t any wind to speak of I pulled out my Scott G2 5 weight for this occasion. Fitted with weight forward line I was ready for some smooth long casts on the wide open river. 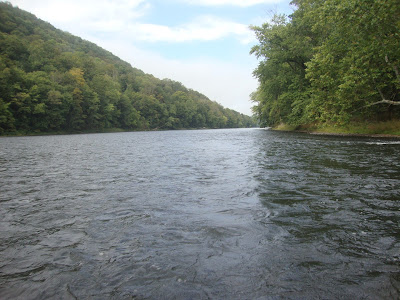 At the river Dano made a game plan. He headed out into the mid river while I concentrated along the banks and outskirts. I lit up my first stogie and started swinger a streamer. Dano scored first and when I turned, when he called my name, I seen a flexing rod pointing downstream with fly line peeling off his reel. By the arc in the rod and his posture I was sure he had a good lively strong fish. The swift undercurrent wasn’t making it any easier for him to get the trout close to him. Slowly and cautiously he waded his way to the bank downstream from me. After he landed the big rainbow a spin fishermen met him at the bank and captured a picture of Dano and his rainbow. 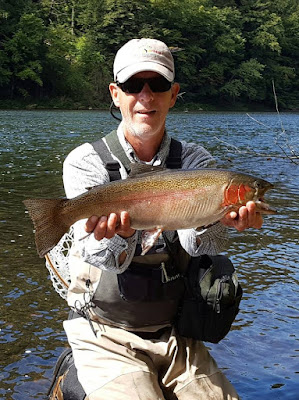 There were a few caddis and a few small mayflies about all morning. In the afternoon a few more caddis were about and when I seen a couple of risers it took me no time to knot on a dry caddis.
The rises were sporadic and very seldom the same trout rose in the same spot. It was if the trout were swimming about looking for a surface meal. I changed caddis wing and body color often trying to show them something that matched what they were after. I seen a couple of trout rise to just below my imitation but didn’t like the offering after all. It wasn’t long before it was my turn to score
There were a few trout within casting distance that would rise occasionally. I knotted on an egg layer caddis with a nice green egg sack. A short cast put my fly across stream and, with some slack, drifted downstream without a wake. A mouth surfaced with a subtle splash and I was quick with a hook set. A surface irruption happened before the trout disappeared beneath. There were no quick headshakes, no underwater shenanigans, just with swimming force he headed out to midstream. Keeping a firm grip on the cork handle I palmed the reel for sufficient resistance till the trout gave me a chance to tighten the drag. He got out some distance before he stopped and gave the line a few tugs. I tightened the drag knob some but kept it loose enough not to snap the 5x tippet. When he started an upstream run I reeled line in keeping side pressure on the tout. Nearer to me the water was only knee deep and I didn’t want him to surface yet so I kept the rod tip low and tried to force the trout within distance of netting him. Close enough it took a bit longer to have him calm down enough to net him. 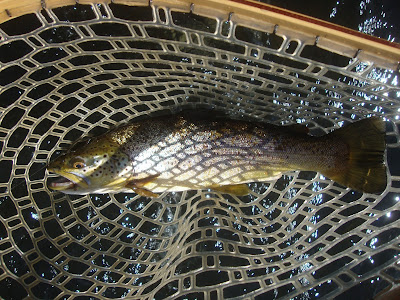 By 2:00 Dano said he was heading back to New York. I didn’t have much else to do later on so I lit another stogie and went downstream to where I saw trout rise earlier.
With the sun lowering on the other side of the river it put a blinding glare on the surface water. Trying to follow my fly across the glare was useless so I started to cast upstream. A couple of big splashes caught my attention and I concentrated in those areas to score again. 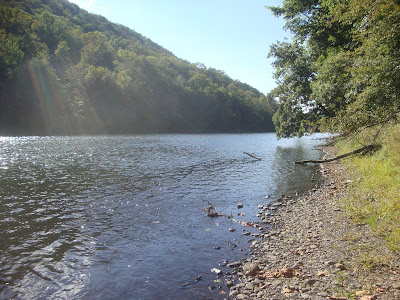 The caddis imitation fell about 50 feet upstream. I was bringing in line to keep the line as straight as possible to the fly. Within 15’ a nose poked through the surface and I quickly lifted the rod with force. The surface splash sprayed water of a bigger fish than I expected. The line tightened as he went under and the rod flexed with line shooting through the guides. Like the other brown trout, it made a round-a-bout run midstream and turned downstream with the current. It held a few yards from the bank but refused to come nearer. I slowly waded downstream, reeling in line, until I seen him, mid depth, and realized what had happened. My line had got caught under a bigger rock and left the trout struggling with a taut line. I swung the line away from the rock which dislodged and freed the line. The trout didn’t have much energy left and was easily netted. 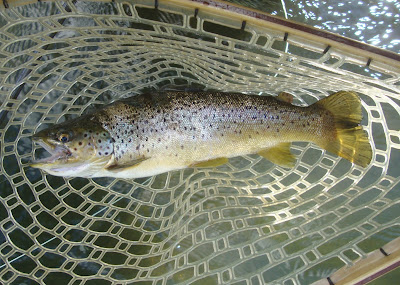 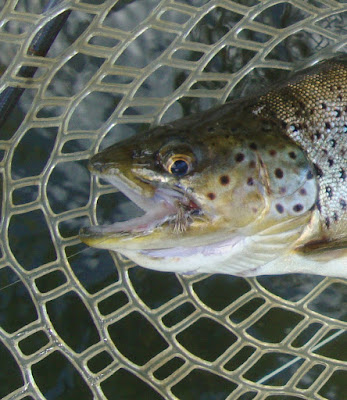 After releasing the trout I waded back up where I had caught him and dried off the caddis imitation. I was just blind casting out-and about when a big splash surfaced where my imitation was last seen. I pulled back on my rod and I felt the heavy resistance on the hook set. This trout stayed deep and took off with more force than the past two. He was heading out in the river current like a running back heading towards the end zone. Mid-stream he turned with the current and kept on keeping on. I palmed the reel rim as line peeled off the reel. When I seen the white backing line shoot through the tip top I put a little more pressure on the reel but the trout wasn’t giving up that easy. Over 30 yards out I saw a surface disturbance as if he evidently came to the surface. The long length of line stretched through the air from the rod tip top to the surface out yonder like a guy wire on a radio tower.  My fingers were gripped tightly in the cork as I felt him struggling to break free. The current was putting a lot of stress on the leader and tippet. He wasn’t coming towards me and used the current to his advantage. I decided to slowly wade downstream as I wound in line shortening the distance between us. It was as if he was resting, facing the current. When I felt I was just upstream and across from him I put a little more side pressure on him by dropping the rod tip some and pulling it towards the bank. He shot upriver and I quickly raised the rod up keeping as much line out of the water as possible to cut down the resistance. Water sprayed off the line as it shot out of the water with the running trout. The pressure was obviously too much and he turned downstream again and started coming towards me. I slowly backed up toward the bank in ankle deep water. I had him reluctantly coming towards me as he tugged now and than like a big dog on a long leash not wanting to come my way. In the knee deep water I saw his wide girth. I let my net fall in the water, attached to my belt, so it would be ready when I needed it. I reeled in more line till I got him closer. With my wrist locked, trying to hold the rod up and steady, I grabbed the net handle. He swirled a few times and I finally managed to scoop up the big brown. He tussled in the net as I carried him towards the bank.
The belly of the brown shown he was well fed. His dark spots were sprayed about his darkened body with a nice dark belly. 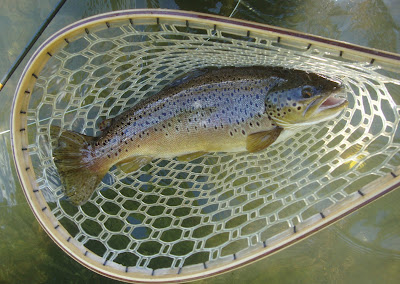 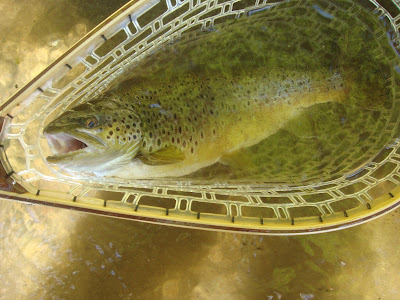 I unhooked the caddis and released the trout successfully back into the river water. I let him rest peacefully in the slow current until I grabbed his tail and gently pushed him back into the knee deep water. He swam away with a healthy tail swat back into the deeper current.
The caddis dry was well damaged during the skirmish so I clipped it off.
I looked out over the water and all surface activity appeared to come to a halt. A few small midges were flying about but the caddis had all but disappeared. I thought ‘maybe the trout were tired of the small #14 and #16 caddis.’  These are big trout I am catching and maybe there is one out there that wants some meat! For the heck of it I knotted on a #10 1x long Gray Wulff pattern and decided to fish this as I waded upstream to where I wanted to exit the river. The Wulff pattern was easy to see and slowly drifted with the wavy current.
A fish exploded out of the water, at the Gray Wulff, and I was Jerry on the spot with the hook set. This trout was a lot livelier beneath the surface with quick turns and spurts like a running back dodging tacklers for yardage. I had a feeling this wasn’t a brown trout and acted more like a wild rainbow. It surfaced a few times but never came completely out of the water. He put on a good wrestling match as I played him towards me and finally netted him successfully. At the bank I untangled the leader that was wrapped around his body. Once I located the Wulff pattern, in his mouth, I took ease and dislodged it. The beauty of the rainbow finished my day of fishing in fine fashion. 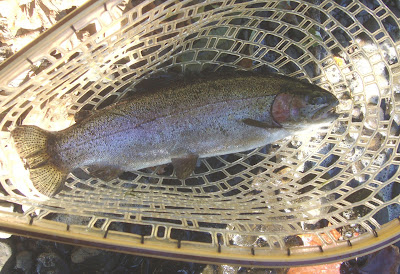 I nipped off the water logged pattern and found another in my fly box. I only casted it out a few times before calling it a day.
I hooked the Wulff pattern in the hook keeper and stood and looked out across the river. I lit my last Brickhouse Fuma and waded up along the bank. 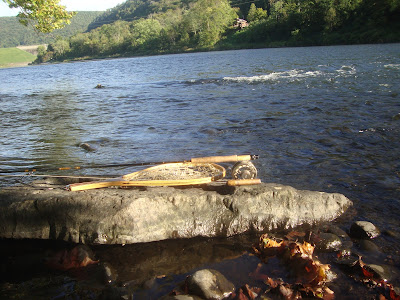 The Scott rod did a fine job with the big fish and graceful casting of the dry flies. Another exceptional dry fly day in the books. 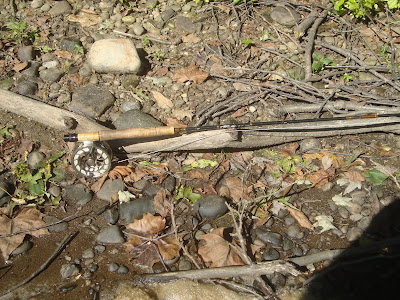 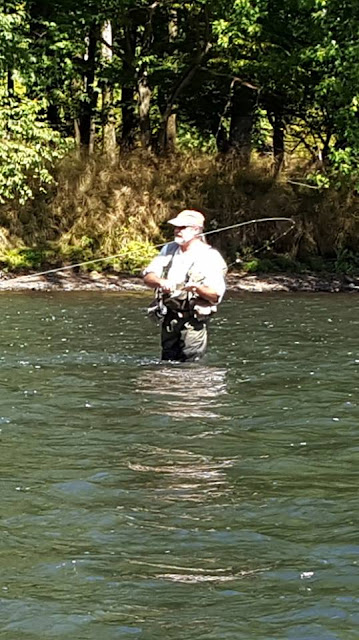 Posted by ~doubletaper at 8:17 PM No comments: