A Rainbow and a Lucky 13 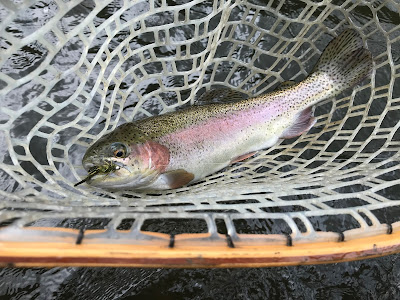 After 3 hours in a misty morning rain, in a kayak, I decided to key on trout. I only hooked 2 smallmouth on poppers and missed 1. 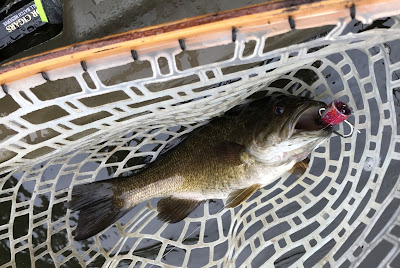 The water was still on the high side but was clearing up nicely. The smallies just didn’t appear to be too hungry. I was glad I didn’t park too far down river. I loaded up the kayak into the bed of my truck and headed back to camp.

Back at camp I took off my waist waders and put on my chest waders. I put the 6 weight Winston away and switched to trout fishing and use my 5 weight Icon Rod. I thought I made sure I put everything I needed back in my vest for trout fishing. I ate a couple of granola bars while driving upriver.

Where I entered the river the wavy water was swift. The water color was that of a light brown ale. I was still able to see some of the darker boulders that covered the river bottom though the water did look quite deep. I knotted on a Woolly Bugger and added weight to the leader. In about a half hour I only managed one rainbow. It didn’t look like today was going to be a very good trout or smallmouth activity day.

I waded down river casting bugger as I went. In the next couple of hours I hooked up to 3 decent rainbows and 2 small smallmouth bass. The one bass tore up my brown bugger and that’s when I realized I forgot my bugger box. When the one 13” rainbow tore the palmered hackle off my dark olive bugger I was down to 1 white bugger, `1 beaded light olive bugger, 1 more dark olive bugger, 1 Triple Threat and 1 White Death streamer. When the sun finally appeared through the overcast cloudy sky I was hoping for a hatch of some kind but nothing was happening on the surface. I did try a couple of dry flies but no trout rose to investigate. Maybe the trout just weren’t that hungry but it was just after noon and the feeding frenzy might just be over anyhow.

I had went a good piece downriver before returning where I caught a couple of trout. I knotted on my last and only beaded light olive bugger and waded out just below my knees to get away from the big Maple hanging leafy branches. I lit a cigar to pass the time and started casting near to further out letting the bugger swing with the wavy current. One long cast, across river, dropped the bugger just this side of another wavy run. I watched the fly line pull my bugger with the current flow paying attention to my grip around the cork for any indication of a grab. Almost at the end of the swing, with the fly line just barely in a slight arc, I felt a bump but not hard enough to set the hook. I let the bugger settle in the current and something grabbed it hard enough I yanked the rod up and back. The long length of fly line shot up out of the water like a water ski towing rope when the driver guns the boat engine. Water sprayed from the line and the line drew taunt. I could feel the weighty hold on the end of the line as the rod tip angled downriver without any give. After a couple of quick hard head shaking tugs the fish headed across river. I wasn’t sure if I had a smallmouth or a trout but whatever it was I knew it was big despite the oncoming current.

He stopped across from me holding deep. When I moved the rod upstream he tugged and swam downriver taking line and abruptly turned into the current after another hard tug. There he fought like a cornered animal trying to get a chance to get free. The line and rod bounced like a bungee jumpers cord at the end of its elasticity over and over again. I moved the rod out in front of me and took in line as he headed upriver just below the surface. I watched as his long body swam right in front of me just out a ways. I knew then I had a decent size rainbow. I lifted the rod and took in some line. He began to move closer. I knew I would have a hard time getting this long fellow into my net so I started to cautiously back step towards the bank. He continued to head shake but when he got in the shallower water he pulled and darted outward. I could feel the forcefulness in the bending rod so I let him take tensioned line out of the reel again. He turned downriver quickly so I waded the shoreline with him keeping the rod in a good arc. His tail swatted surface water as he rose and then darted back into deeper water. He suddenly rose again and his mouth surfaced with jarring head shakes. I could see my bugger stuck in the side of his l mouth hoping it wasn’t going to shake loose. I wasn’t sure if this guy was ever going to give up but I held the handle grip tightly like a mountain biker heading downhill over a rough stretch of trail.

I moved the rod down and towards the bank. He slowly swam towards the bank. I was in shin deep water. I moved the rod upstream out away from me and again he followed the pressure. I took in line and had the net ready trying to hold the rod up and steady with one hand. When he started to pass me I held the rod up higher and he started to swim closer. I took a few steps back. He forced his way downstream a bit as he would not swim any closer. I could feel the big arc in the rod sections as I moved the 9’ fly rod towards the bank. He didn’t have the muscle enough to swim out from the shallow water. I reached down and had to more or less push him with my net in the shallowest water near the bank. What a relief when I finally had him in the net. Half in the net, he laid still long enough for me to yank the hook from his mouth as if pulling a tooth from a young child. He flopped a couple of times before he settled down. 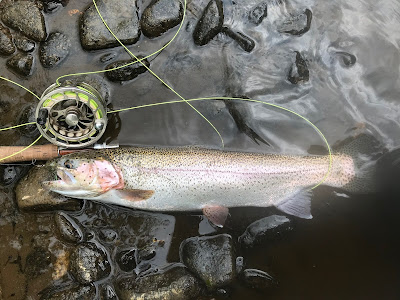 After a couple of pictures I released him and he swam away into the current. 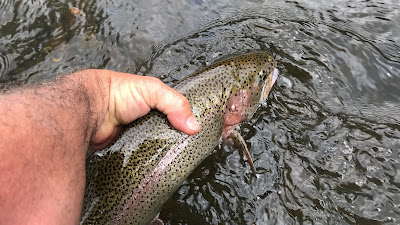 It wasn’t long after that I heard thunder in the distance. It rumbled like an amateur team night at the local bowling alley. I looked up and the distant dark gray sky was moving into the white clouds. I headed up river to cross not wanting to be on the opposite side of the river of where my truck was parked. I caught 2 more rainbows in the 11” range in a misty rain. When I heard a gust of wind rattling the tree branches and leaves I headed for the truck.

I popped open a Lucky 13 beer and drank it while I took down the rod and put my gear away. 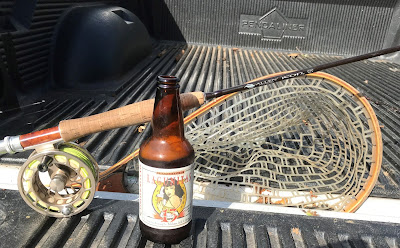 I couldn’t wait to get out of my waders. Thinking about that, I was in waders for some 9 hours. First in the kayak and then wading the river for trout!

I came to the conclusion a long time ago having worn different brands of waders. Some company tells you their waders are comfortable they are telling a fib. Some might fit a little better than others but they aren’t comfortable. Let’s face it, you’re not going to put them on, instead of a pair of jeans and a T’ shirt, just to leisurely wear them for the day.