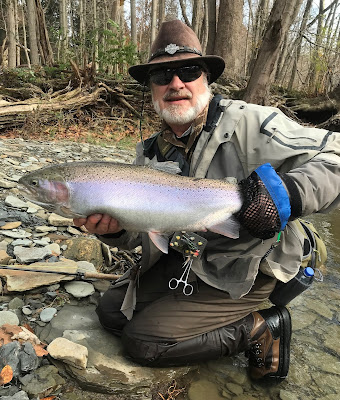 After fishing for a week in Lake Ontario’s tributaries for brown trout I made a quick decision to fish for steelhead in the Erie tribs. There was going to be a break in the cold weather Wednesday up to 60*. I tied some sucker spawn Tuesday to fill the fly box that was vacated by lost flies in NY. I had everything I needed by the front door ready to put in the truck Wednesday morning. Waking up around 4:30am wasn’t a problem. Kind of got to be a habit from the past NY trip.

I parked and was putting on my gear when an SUV pulled up and someone called out. A friend, Deetz, happen to be gong to fish the same area. He got his gear on and we headed to the water to find ourselves some steelhead.

We fished a few holes on our way upstream. We couldn’t spot any steelhead in the light stained water but we did fish a couple of the deeper holes and runs without a strike. When we got to where I fished the Sunday before I headed to NY for browns we stopped and took a stand. It was a long deep stretch with wavy current as the water entered and flowed to a calmer tail out. There was one angler on our side fishing the head of the run and two guys across the crick. There was plenty of room for all of us. There were plenty of leaves to deal with as they drifted down the crick in bunches at times. It was quite challenging getting our offerings down to the fish without a leaf getting caught up on the fly, line or leader.

Deetz hooked up first on an egg sack he ties, with a spunky steelhead just before 9am. It fought well and I was glad to see him get to tire it out and land it. 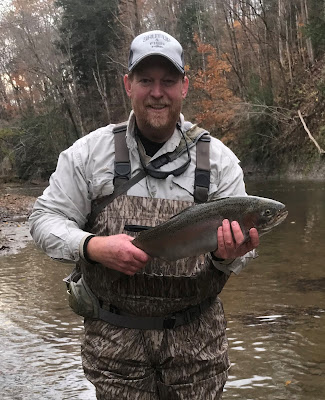 There’s a difference between hooking and playing fresh water brown trout and steelhead that runs the tributaries from the lakes. Heavy browns bully their way usually deep with head shakes and heavy tugs. If they do rise just under the surface they may alligator roll wrapping the leader around them like a roped calf at the rodeo. This sometimes causes an unorthodox fight that also may cause breakage and a loss fish. In my opinion it takes longer to tire out a brown than a steelhead most of the time.

Fresh heavy steelhead are like a wild and energetic horse of a fish. They’re speedy and can make a 10 yard dash, if there’s room, in a fraction of a second. They’ll turn quickly underwater like a quarter horse barrel racing. The more anxious and determined ones will shoot upward out of the surface water at a moments notice and show off their aerobatic skills twisting and sometimes somersaulting trying to unleash themselves before reentering the water. You better have the drag set on the lighter side on the take or you’ll lose the fish on their first sprint.

A little after 11 he hooked up again. This time the bigger steelhead gave him a lasting battle. It was fun watching him calmly playing the frisky steelhead to the bank. 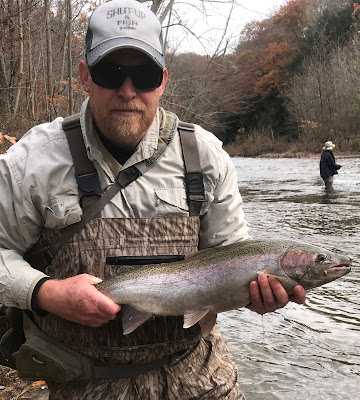 Just after he landed that and got pictures I got my first good strike of the morning. Right off I knew I had something big and was going to take a while to get the fish in.

She took off, after I set the hook, like a race horse out of the gate. She raced across crick leaving a wake behind. She stopped short of the guy across crick and spun leaving a whirlpool of leaves on the surface. My 7 weight 9’ fly rod was arced well near the butt section and the line was as tight as the horse hair fiddlesticks used on a violin. The steelhead headed upstream so quickly I had to keep the rod high in the air to cut down on the line drag across the surface water she left behind. I felt a jolting tug into my grip just before she turned and raced downstream. I had the butt in my gut holding the cork grip with two hands waiting for her to settle down some before adjusting the drag a little tighter. Out in front of me a ways, just below the surface, she started tugging and yanking on the line as if I was some kind of a mule. The bowed rod tip section bounced and rebounded excessively with the jolting force. It felt like I was holding onto a pole with a kid bungee jumper on the other end. This is when Deetz and I were able to see how big the gal really was.

She turned downstream after her surface antics and swam without the speed and force as before. I slowly waded downstream with her trying to keep side pressure on her to help exert more of her energy. Deetz moved downstream to help me out as neither of us had a net. Slowly but surely I got her near us but each time she had energy enough to pull away and weighty enough I couldn’t stop her from taking more line. For a while it was a give and take battle. She’d give in and come my way but near me she would dart away and take the battle out further.

There was a shallow riffle down crick I figured I could land her safely so I asked Deetz to stand out from the bank and maybe I can land her on the shallow rock bed between him and the bank. I started to wade and guide the fish towards him. I felt the steelhead shaking the line the whole time but I also saw she was coming nearer to me once I got on the other side of the tree limbs that hung above. Deetz must have noticed she was getting closer to the bank also and came up to give me a hand. The water was still a foot or so deep along the bank so I coaxed her into shallower water where we were able to land her without much squirming and kicking like a wild child having a temper tantrum. 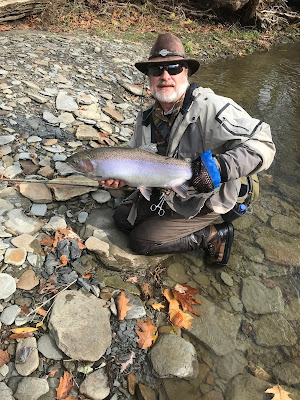 Around noon, I would say, the sun was out and the heat was on. It wasn’t long after that Deetz fished his way down creek and then was heading to his vehicle. I stuck around and caught a few more steelhead on sucker spawn. 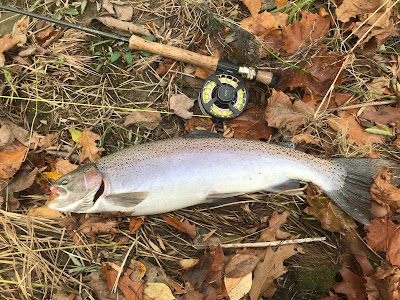 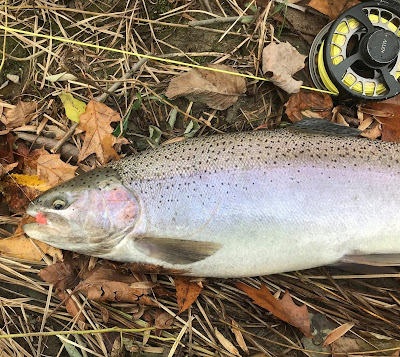 One was another fatty that gave me a good fight. 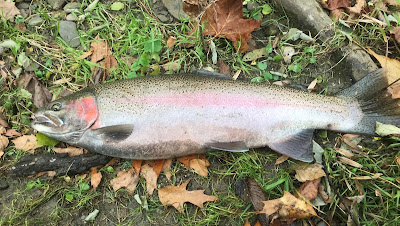 Another steelhead showed me, and the other guys that stuck around also, some of her aerobatic skills. She shot up out of the water a couple times twisting and turning in mid-air. Her chrome sides glimmered like sterling silver conchos on a bridle before falling back into the water. 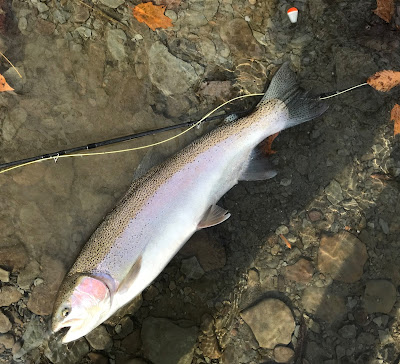 For some reason the water began to rise and more leaves drifted down. It was getting frustrating trying to avoid the leaves to get my offering down to the fish. I decided it wasn’t worth the aggravation and headed out.

At the truck, since it was only around 3:00, I opened a bottle of Founders Porter, got dressed in street clothes and ate a sandwich.

I called Deetz and told him I caught a few more and told him about the rise in water level. The only thing we could come up with was snow melt from the warmer weather. I told him I noticed on the way up, on I79, there was snow on the ground around the Saegertown and Edinboro exits.

After sending him the pictures of his catch I grabbed a Brick House Maduro, lit it and headed for home.

Well, by days end we found some steelhead! I guess you can call us ‘founders!’