Was it Worth Enduring?

Was it Worth Enduring? 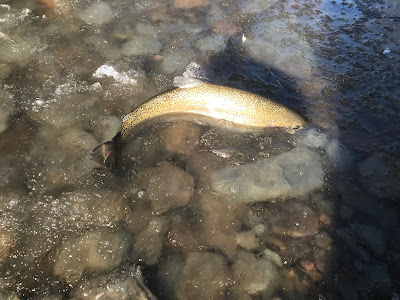 The truck thermometer read 12° at 5:30am when I pulled out of my driveway. If it wasn’t that the plan was to pick up Kevin and go steelhead fishing in Erie, I would have called it a ‘no go’ and headed back to bed. By the time I picked up Kevin it read 15°. When we pulled in and parked the temperature was hovering around 20°. We’re we a little crazy? Well, there was already 3 other vehicles parked when I pulled in.

We took our time getting our waders on. We greased our leader, rod eyes and a section or fly line with lip balm to keep them from freezing too quickly. After tying on our first offering we sat in the truck for a bit to warm our hands and feet before the journey into the freezing temps to the crick.

We walked upon the frozen path and then through the snow covered forest to the water. There was already anglers fishing the prime spots as Kevin told me. Being that I never fished this section, at least the way we entered it, I wasn’t familiar with the lay out. One fly fisherman stood on the stony shore with his hands in his pockets and hood on. He mentioned there were fish in front of him but it wasn’t easy to get a good drift do to the slush flowing down with the current. Kevin and I fished for about 15 minutes around the fellow before Kevin went upstream.

The water before us had a good flow for drifting our offering. Kind of on the shallow side, maybe 3 feet or so. Still in the shade of much sunlight the water appeared to have a blemish in color. Small sheets of ice drifted upon the surface looking like thin sheets of broken glass. It was a challenge trying to get my offering down below the surface and drifting below without getting caught on the ice.

Maybe after another 20 minutes Kevin headed downstream. I continued to fishing upstream from the one angler pin pointing my casts near the far bank just shy of the extending ice shelf without any takes. After a couple of other anglers met up with the one near me they fished a short bit then headed downstream. Now I had the whole section to myself and hooking up with steelhead began!!

After a few more casts with streamers I decided to knot on a couple of sucker spawn. My fingers weren’t as nimble with the freezing temps but I managed to get them tied on.

The first steelhead I caught was a good size male that I could tell. I felt and watched him shaking his head trying to get the hook loose while his body squirmed in snake like fashion. Upon reeling him towards me ice built up so much on the fly line that it bulged to the top eye and I couldn’t reel in any more. It caught me by surprise. While I finally came to the conclusion was to back up and kind of force him into and onto the frozen ice, the steelhead was able to come loose. It didn’t take long into fair hooking another steelhead that it too managed to get free before I landed it. I unintentionally snagged 2 fish before finally landing one. 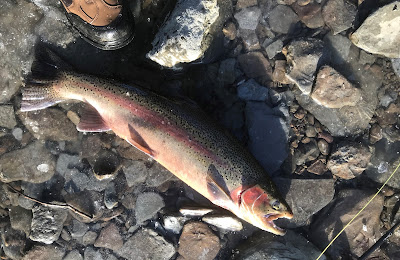 When I took the picture with my phone I noticed I had a text from Kevin. He said he had fish in front of him and no one else was around. I texted him back, told him I was catching fish and I wasn’t moving.

When the sun finally shown down upon me and the water it felt a little warmer. This could of what got the steelhead a little more active and I was hooking up enough not to think about my cold hands and cold feet. The fly line and rod eyes weren’t freezing up as often though sheets of ice still floated downstream on occasion. When water did freeze on the fly line it was like trying to cast a stiffened rope. 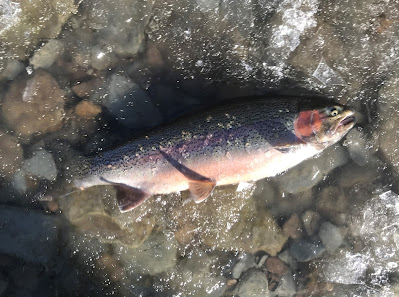 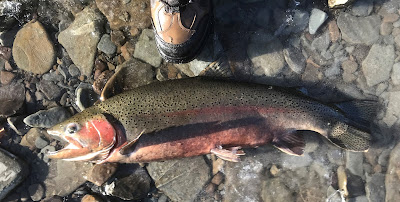 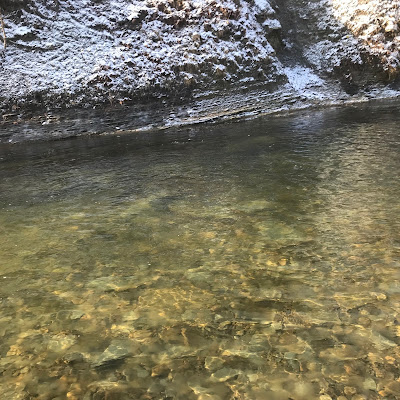 I decided to drift a streamer below a weighted sucker spawn. On the first drift through the line took off putting a good bend in the top two rod sections. When I saw the head of the steelhead break the surface water and aggressively shake its head like a miniature poodle swinging its stuffed toy trying to rip the stuffing out, I new I had a good hook up on it.She put on a good heavy fight not wanting to give up. I took my time and eventually got it to the surface ice. I was reeling in one more steelhead on a pink sucker spawn when Kevin came up to join me. 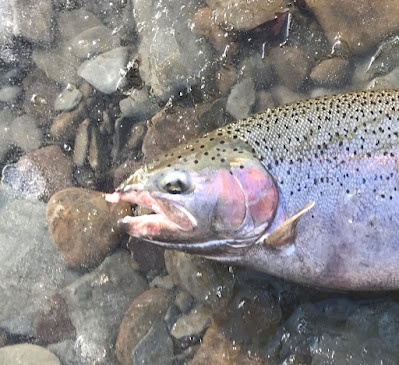 I pointed out, to Kevin, where the fish were holding with the tip of my rod.

He knotted on a couple of sucker spawns and we began to double team the steelhead. It didn’t seem the freezing water effected the long battles before getting the fish landed. Though none actually leaped out of the water there aggressive head shakes and weighty runs made for an enjoyable worthwhile fishing experience. 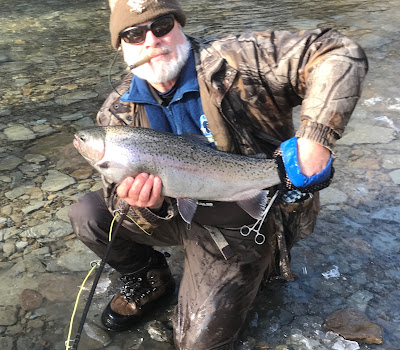 Though we did unintentionally snag a few trout we did manage to fool enough to fair hook them in the mouth.

I was changing colors of spawn and streamers like showing a panel of judges which ones looked more enticing. Eventually I got a few curios steelhead to commit to my offerings. 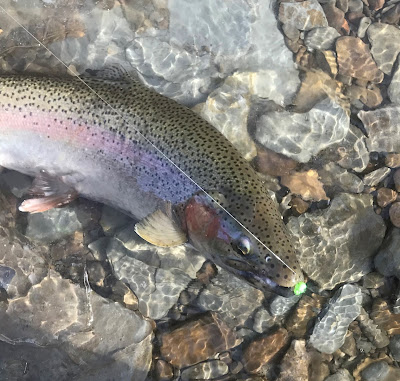 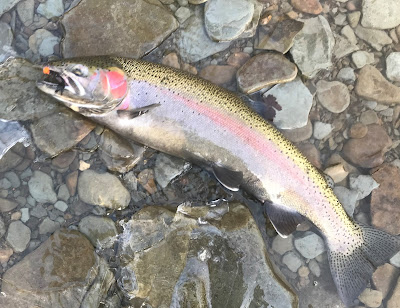 Though it never warmed up much we managed to stick it out till around 3:30 before calling it quits and head to the truck. On the way out snow clumped up onto our soaked felt soled wading boots. It was as if we were walking in platform shoes on our feet. Combine that with ice cold numb feet it was kind of awkward to say the least.

Back at the parking area we were the only truck left. We got our wading gear off, took time to get a bite to eat, and headed home.

Was it worth enduring the freezing weather and conditions? 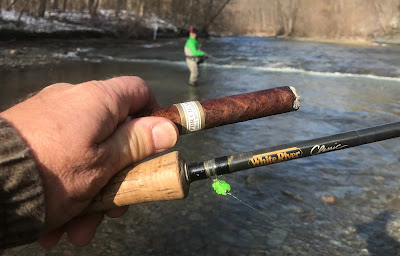 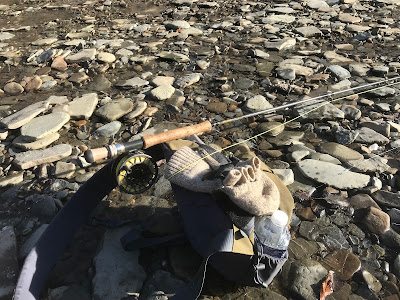