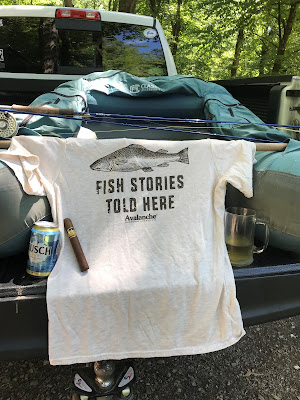 ‘The popper disappeared off the surface with an audible gulp. Within seconds of tight lining the culprit, a big fat smallmouth exploded out of the water nearly clearing his tail from the surface. I didn’t see the popper in his mouth!’

I was out in my float tube on the river once the chill of the morning warmed up a bit. The billowing clouds were white and picturesque in the bold blue morning sky. 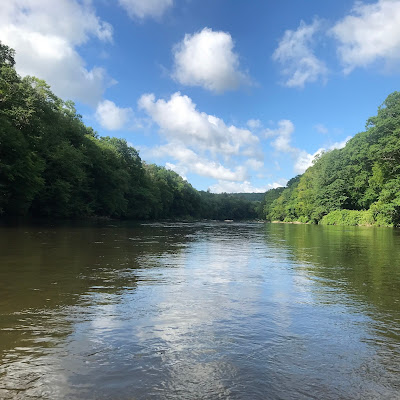 Sun rays brightened mid-river already as I looked downstream shading the left bank against the green leafy forest. It looked like an endless float 1 ½ miles to where I parked my truck. The water was a taint brown. I could see maybe a foot below the surface but in deeper water not so much. I was hoping a noisy popper skirting the water surface would raise a few smallies to make for a good day.

It was about noon. The water had cleared up some after 3 hours of floating and fishing. I was about 28 feet from the left bank holding steady with my finned wading boots against a big subsurface boulder. To my right the wavy water current was quick and flowing into a wide section of rapids about 75 yards down river from me. It’s been a very slow day so far trying to raise smallmouth to my poppers. The worst was after about a ½ hour into the float the wind picked up and I was casting against the wind 75% of the time. At times the gusts were so strong it prevented my float tube to continue to slowly drift downriver with the current. Why the wind always blows upstream is beyond me?

For the past 3 hours I’ve been casting frog poppers and a silver popper to imitate a dying minnow. I hooked 2 smallies and missed a couple but in 3 hours I should have raised a lot more I felt. I wasn’t frustrated or giving up but the excitement was gone and my hopes weren’t as high. I decided to switch to a brighter color popper and chose an orange/yellow one. I casted out in the faster water and near the rock lined bank a few times each without a rise. Sometimes I feel it’s not as much as the color as it is in the commotion and size of the popper I’m using that attracts the attention and the take. Before moving on I decided to snap on a gold color popper to my fas-snap on the end of my 8lb tippet. I made a couple of casts near the bank without a strike. I made a few more casts directly upon the wavy current and tried to make a little more splash and noise between 2 or 3 strips towards me before letting it dead drift a short distance. I watched the popper briefly dead drift out of the wavy current into calmer water. The popper disappeared off the surface with an audible gulp. Within seconds of tight lining the culprit, a big fat smallmouth exploded out of the water nearly clearing his tail off the surface. I didn’t see the popper in his mouth! He belly smacked back into the water and took off with my popper like a dog swiping the last hamburger right off the picnic table plate. The rod bowed towards the fleeing fish and I could tell this was a big one by the forceful weight I felt in my cork gripping hand. He went cross current at first and then swam downriver with the current. With 8lb tippet I wasn’t going to let him bully me around too much but I had to let him take some line out when he swam downstream with the current in haste. With the 6 weight rod bowed and putting pressure on him he turned and sped upriver keeping his distance. The tight line cut through the surface water as fast as a sues chef with a Ginsu knife slicing vegetables. We played this game a couple more times before I was able to draw him a little closer. He swam up river, circled and headed to the calmer water near the rocky bank. The float tube and I spun with him and in doing so I lost my footing on the slanted boulder I was holding against. In the calmer water he still had enough strength and weight to prevent me from pulling him in closer. As he struggled in the calmer water, as if trying to shake off a sticky hanging band-aid on the back of your wounded hand, I started to reel in the excess line on the float tube apron. Once I got enough line on the spool I began to try and force him towards me. The rod arced deeper as the fish tried to prevent from getting any closer but slowly came nearer with vicious quivering motion. Nearer the tube he finally submitted and I got him on the apron. He had inhaled my popper as it was completely in its mouth. He wasn’t getting away. 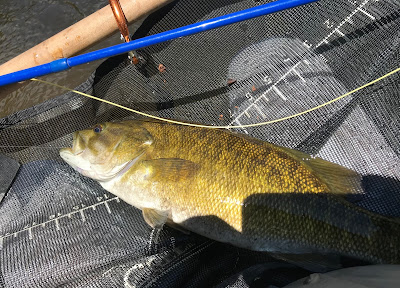 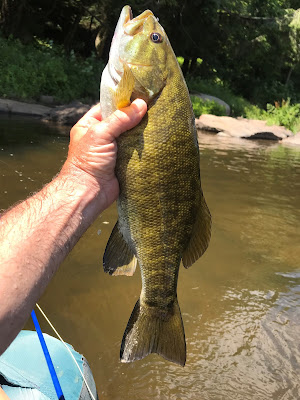 After that fiasco I continued floating and fishing downriver using the gold popper. I hooked only one more and missed 2 that I believe were pipsqueaks before getting to my truck. Maybe the smallies weren’t too hungry but the big one made my day and the time on the water well worth while. (Along with a few cigars!) 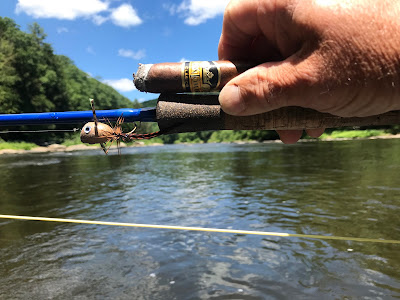 That evening I enjoyed a Killian's Red and another fine cigar out by the campfire. 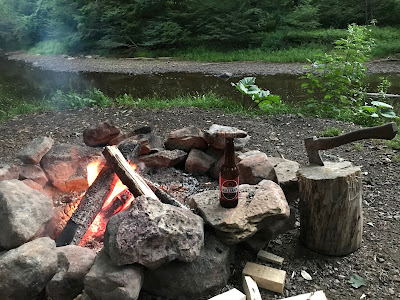