A Frog Popper Kind of Day

A Frog Popper Kind of Day 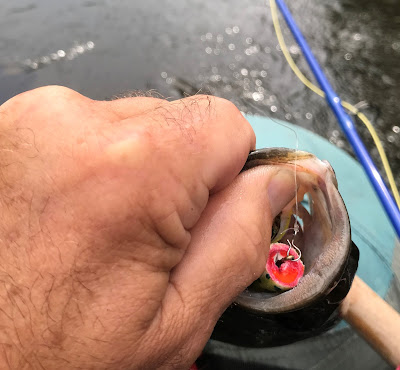 This was one of my best days on the river catching smallmouth. Maybe not the biggest during the day but the action was quick, fast and seemed continuous. From within a ½ hour after I launched the float tube at 9:30 am. I was hooking smallmouth with a frog popper. The smallmouth were hungry for frogs all day so I stuck with them and was just rewarded.

It was an overcast morning and looked to continue throughout the day. Green trees lined the banks of the Clarion River for as far as the eye could see. Heavy clouds covered the blue sky above like a kids foaming bubble bath. For now the water was calm. Maybe too calm like a calm before the storm. There was barely a breeze which is pleasant for fly rod fishing. I launched the float tube with my smallmouth assortment, fly rod, a few cigars, water, trail mix, and a rain jacket. The water was a tad on the cloudy side still clearing up from the past rains. I found this might be the best time to fish the river. I suppose when the water is real muddy the bigger fish can’t see baitfish to eat. Just as the water becomes clearer they must be hungry enough to go after anything they see beneath or rise to any commotion on top. 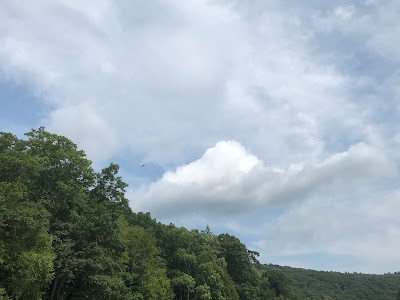 It was around 9:30 when I pushed off for the days adventure. Looking down river along the bank looked deep enough to maybe hold some fish. I kicked off and finned my way just out within casting distance from the bank. With the higher water and clearing up I figured the bass might not be holding along the banks and out in not too deep of water looking for an early meal. As I slowly drifted down river I made a few casts into the slow water along the bank away from the main stem of the river. A fish rose to the surface at my popper with a gulping splash. I reared back on the rod and my first taker was on. Not a big smallmouth by any means but one that came up sooner than I expected. 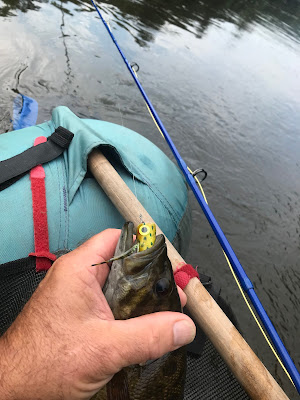 Well, that deserved my first cigar. I took out an AB sun grown and lit up the dark cigar. I was ready to relax and enjoy myself. 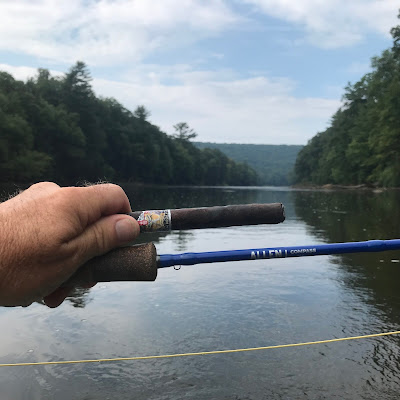 Within about 5 minutes after lighting up the stogie I casted out and hooked into another hungry smallmouth. 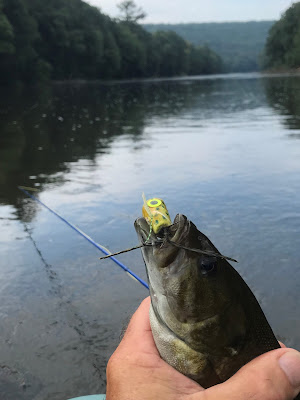 I looked at my frog popper and chuckled a bit. I see all kinds of beautiful painted and constructed poppers that people create on Face Book fishing forums. I couldn’t imagine how much time and effort they put into making them,

besides the cost of the supplies. I know the simple ones I make take some time and effort but I’m sure not as much as the beauties I’ve seen. Being that mine catch smallmouth and largemouth I have no need to make them look glamorous. I don’t sell them and I’m not in a contest for best of show. I let the smallmouth decide whether my poppers fit their men. So far, they have been doing an exceptional job.

Drifting down river I use a longer frog popper in the more wavy water for better visual effect and pop/gurgle it more noisily on deeper sections than in slower current. Today the smallmouth appear to be everywhere looking for food and just not along the banks. 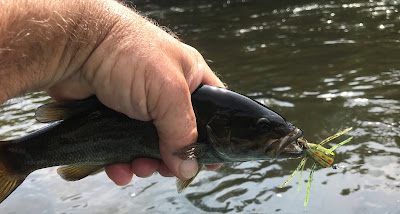 I’ll try another color when rises slow up but go back to the frog popper. Sometimes I think it’s the commotion on the water that causes a curios take but there are times, after popping it a few times, I just let it rest and a smallmouth will grab it. Kind of tells me my creations must look enough like food that the smallmouth are willing to grab it upon investigation. 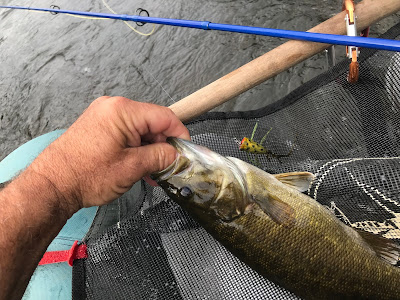 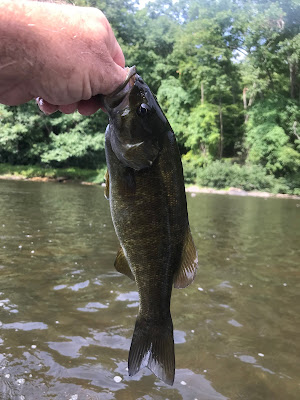 Around noon I was ready for cigar #2. I took out a Don Tomas Robusto Clasico Natural. The mild cigar was smooth and burned evenly throughout. 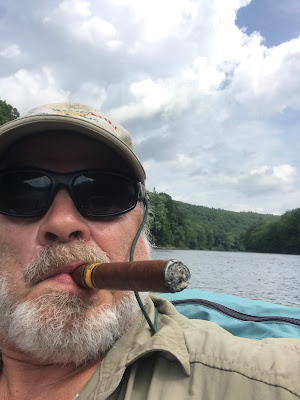 The sun shown through the clouds for a moment and brightened the day some. I figured the smallmouth might head for the shady areas along the bank and concentrated on casting that way most of the time. Every once in a while I’d still catch one out mid-river.

There was a lengthy boulder along the bank that looked like it ledged just below the surface. The water along the bank didn’t look very deep but I found you never know how deceiving the shallow water my look than what really is beneath in pockets of deeper water among a rocky bank line. My first cast was just out form the ledge where the water began to flow into it. A smallmouth splashed at the moving popper and I reared back for the hook set. The line tightened. I could tell it wasn’t a big one but it was a frisky one at that. I steadied myself and brought him to the float tube successfully. I was steady with my booted fins holding beneath on the rocky river bed. I made another cast near half the length of the boulder ledge and a fish surfaced almost as soon as my popper hit the water like it was trying to take it before another hungry fish did. I reared back and another smallmouth was hooked. I got him to the apron also. I actually caught 2 more along that boulder and missed one hook up. It was if I was catering to a training seminar of a small group of hungry repair technicians! 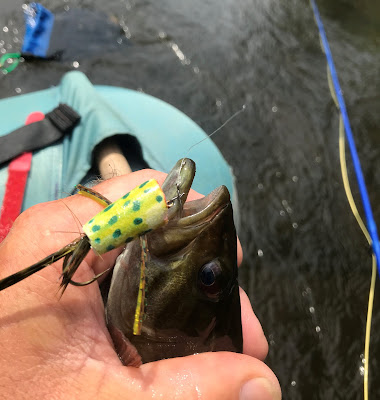 Further down river there was a tree down, stripped of its bark, top siding the surface with branches extending in the air. It looked real fishy. I was able to stop just upriver from it and gave a few casts onto the water along the bank. One cast I laid the popper onto the surface of the water that flowed right into the downed tree limbs. I gurgled it a few times the closer it got to the limbs and a bass exploded up at it. I waited a second or two after he took it under and yanked back hard. The line shot up and tightened and I could feel I had a good smallie. I had to keep him from swimming back into the tree limbs so I gave him no line and had to really test my knots and rod strength. I got him to swim upriver away from the tree hazard. The rod arced deep as I drew him closer. He hurriedly swam between the bank and I upriver a piece. I could see big submerged boulders in the shallow water between me and the bank where the smallmouth was swimming through. I held the rod high and gave him some line as I turned the rod trying to guide him out away from the boulder strewn shallows and into the main stem. He followed with some forceful hesitation. Once in the main stem of the river I felt more positive about the situation ad carefully got him to the float tube. 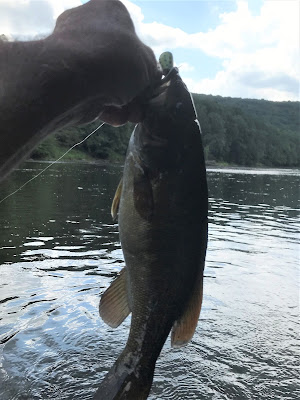 I was tying another frog popper on do to the fact the recent smallies loosened the popper around the hook besides ripping the eyes off of it. As I was doing this I had a visitor stop by. I’m not sure if he was interested in what I was doing or just looking for a place to land and take a rest. He didn’t seem too worried about parking his butt on the float tube. 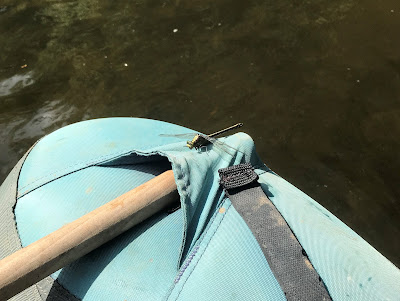 There was kind of a lull in the action for an hour or so. The water was pretty shallow as I floated so I didn’t cast many times and just put my fins up in front of me and drifted. When I got into deeper water I was ready for more action. I was pretty far from the bank. Down river I could see a big long fallen log just out from the bank aligned with the flow of the water. I kind of walked my way on the shallow bedrocks within casting distance. Being the water was shallow I didn’t want to get too close to it and cause a water disturbance. ‘Just maybe’ I thought ‘there were a few smallies underneath or near the log in the shade of it.’ I hauled off a strong cast towards the log that fell well short. I gave a couple of hard noisy gurgles to draw attention and then started swimming the frog popper back towards me. The commotion did the trick. A fish surfaced with an audible gulp and took it under. I reared back and the line tightened. I could feel this was a weighty smallmouth also. He made for a good time battling before I got him close enough to lip him. Nice one! 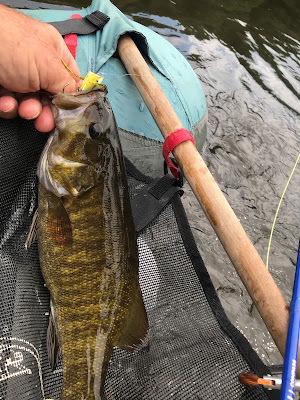 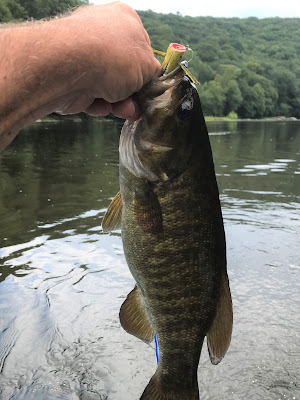 ‘Just maybe’ I thought there might be another close by. I gave another long cast towards the log. I didn’t make much of a commotion this time but hesitantly popped it towards me with short pauses. A smallmouth exploded on the popper as if he thought it was hurriedly escaping from him. Again I reared back after he took it under and again the line tightened. This one was cleaver enough to escape from my grasp though before I got it too close.

By now I was pretty close to my exit point. In fact I was able to see the garage my bicycle was parked at across the road. I kept within casting distance to the roadside bank and casting over towards it. The water appeared to be pretty shallow but I kept casting as if there was nothing else to do before getting to my bike.

There was one huge boulder up against the bank and ¾ of it was in the water. Maybe that boulder held enough water back to make it a deeper pocket of water. What ever the reason, after my popper hit the surface and after a couple of short pops, a smallmouth inhaled the frog popper in an overwhelming disturbance that sprayed water in all directions. It surprised me, no doubt, that I thought I was going to be late on the hook set after he took it under. I yanked back like I was going to rip the lips off of this one. The rod arced deep and I felt the fish tussle on the straight tight line. I watched as the wake was noticeable upon the shallow surface as he swam upriver through the shallows. He circled around me in deeper water and into the stronger current and I gave him some line. After he swam downriver some I held tight and I could feel him turn. He burst out of the water, full bodied, shaking the popper stuck to his lip. A big splash followed as he submerged beneath. I’m not sure if this one was ever caught before but he wasn’t giving up too easily coming to the float tube. Even once there I had to be real careful lipping him, not wanting to get hook stuck, as he pulled and tugged on the bowing rod near the tube. 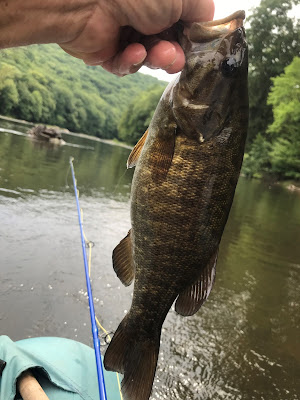 Well, that ended one of my best, most hooked smallmouth fishing on the river.

It doesn’t get much better then that!