"Wet and Colder Than a Witch's Kiss"

“Wet and Colder Than a Witch’s Kiss”

I woke up listening to the patter of raindrops on the camper roof. It wasn’t raining heavy and it wasn’t just wetness falling off the limbs and scarce leafy branches, it was raining. I got up and looked outside. It was just turning daylight. Besides the rain it was windy out. Autumn colored leaves blew from their branches and whisked to the ground with the windy conditions. At times the wind gusts were strong enough to sway the 28’ camper just enough to be noticed. I was suppose to meet a friend at a local catch and release stream but there really wasn’t a promise. He had maybe an hour drive to get there and I was only 18 miles away. When I stepped outside to look at the thermometer the cold hit me like walking into a butchers freezer. The thermostat read 34°. I closed the door behind me as I entered back into the camper.

“Dennis isn’t going to go in this weather”, I thought, “not just for trout.” I turned on the gas to the peculator and started breakfast in no hurry.

For the next 4 hours I fiddled around in the camper biding my time hoping the on and off rain would stop and the gusts of wind would calm down. Around noon I got bored enough to take a ride for cell phone service to see what was going on in the world I might be missing. My truck thermometer read 36° and it was still quite windy as I drove along the Clarion River. Up on the hill I got service and backed into a spacious area to park from the roadway. Instantly I got a message from Dennis and three pictures of the big rainbows he caught and netted. 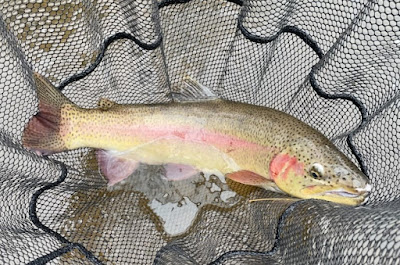 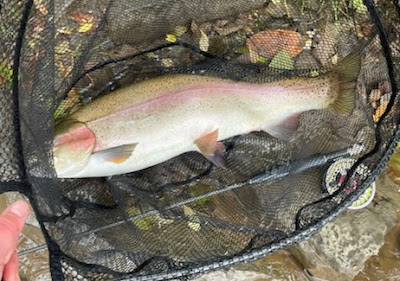 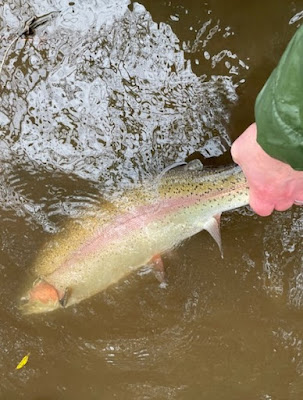 That set a spark of hope and excitement in my trout bones. He braved the bad weather conditions, took the drive and fished. I sent him a message that I hadn’t made it. I drove off, back to camp, without checking anything else on my phone.

At camp I put on warm clothes. I already had my Gortex rain jacket filled with my fly gear. I got in my truck and headed to the stream. After about 9 miles I texted Dennis to let him know I was on my way. He texted back and said he was already on his way to Punxsutawney homeward bound. I looked at the truck thermometer and it read 38°. My windshield wipers showed there was still slight rain falling but it looked like the wind had died down. I was 9 miles away from camp and the 9 miles I was headed would get me to the trout waters. I still had the excitement running through my veins and wasn’t going to turn back.

After parking, assembling my fast action fly rod and getting my gear on I headed to the creek.

I crossed the creek and waded the shallow section of water upstream to the riffles. Below the riffles the water became much deeper on the roadside. I knotted on a Woolly Bugger and started casting into the shallow water stripping the bugger slowly back towards me. The slight wind made it tougher casting down creek but with the 9’ fast action rod and weighted bugger I was able to cut into the wind with a little more casting effort.

The air was cold. Cold enough that as time went on my fingers were feeling the effect of not being as nimble as when I got there. The rain came and went and I’d cover my tossle cap with the hooded jacket. The wind blew more leaves onto the water surface and my casts had to be pretty accurate not to hit the moving targets. It was like shooting at a turning windmill trying not to hit the blades. The Woolly Bugger just wasn’t happening so I knotted on a Triple Threat streamer. I slowly waded down stream casting out and letting the streamer drift with the current and then slowly stripping it towards me.

The first take was subtle. As I stripped it towards me, in the slow current, the line straightened and I felt a slight nudge. I yanked the rod back and set the hook. It felt like I had just dislodged a log from the creek floor and it was drifting heavily down stream with the current. I tightened my grip as the fish bullied down creek taking line. I kept tension on the line but let him take line as he wanted till I thought he would settle down some. With the head jolting and powerful turns down creek he was using energy as the arced rod took the brunt of the pressure he was putting on the line. Once he turned and headed for the far bank I started to tighten the tension I was putting on the line and when pauses permitted I’d crank the reel drag a notch or two tighter.

(Though it may look strange, the advantage of casting right handed and reeling in right handed is that I can adjust the reel drag knob easily with my left hand while fighting a fish. Though I switch the rod to my left hand when reeling in, it has come a custom that I don’t really give it much thought.)

He evidently didn’t like the more tension I was putting against him. He started to put up a stronger resistance beneath. Swirls of water disturbed the surface as he thrashed around telling where he was at. I got him headed my way briefly but he was in no hurry to give up just yet. He took off down creek and there was no way of trying to stop him. I kept tension on the fly line as he peeled off line from the spinning spool. He subsurfaced in the shallower water down stream splashing about before heading up towards me again. I took in line in a hurry trying to keep tension on the hooked fish. He kept his distance on the far side of the creek by the time he slowed down. I had a lot of line floating around me and I knew I better get it in the spool before I got him any closer. I changed hands and pinched the fly line between my finger and cork grip. I didn’t force him towards me but kept just enough pressure as the rod tip bowed slightly towards him. He struggled at times but didn’t take off as I wound in line. Once I had the slack line wound in I attempted to draw him closer to me to net him. He reluctantly swam towards me but as I lifted the rod he alligator rolled getting the leader and tippet around his thick body. With that he tried to swim away, and being all tangled up, I felt like I was attached to a branchy limb drifting down creek with the current. Now, not only did I have to get him in my undersized net but needed to untangle him before doing so. I thought for sure I was going to lose him.

So, there I was with this big brown trout on the end of my line. I was twisting and turning the rod trying to untangle the line around him while he was struggling against me. It was like trying to untangle a snagged branch beneath the surface not wanting to lose your favorite streamer. Somehow he got untangled and through it all he was pretty worn out, at least I thought, until I tried to net him. He wiggled, squirmed and fidgeted before and after I got him in the net. I tried to keep the net upright trying to hold him in it till he settled down. Once settled I got a quick picture of the feisty big male brown before I dipped the net fully in the water. It didn’t take much coaxing before he swatted out of the net and swam away. 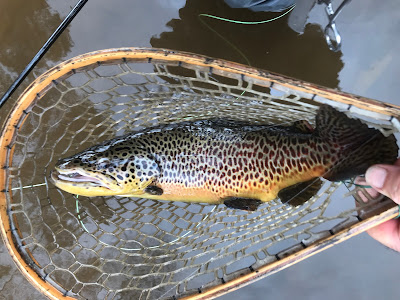 No doubt that was encouraging. I don’t remember it being as cold all of a sudden though my fingers weren’t too flexible as I retied another streamer on. I continued in the same manner casting down and across creek letting it drift down stream before stripping it slowly towards me. This time a trout grabbed the streamer and took off like a beagle on a fresh rabbit trail not knowing it was still on a leash attached to my hand. My fore arm jolted down stream with the heavy take. I knew I had another big trout as line unwound from the spool and spat out the tip top. This fish was no easy catch either. I felt my forearm muscles tighten and my cold hand and fingers around the cork grip was tight but the tightness wasn’t as noticeable with my fingers so cold. We struggled back and forth for an advantage like two arm wrestlers in a heavy competition. I eventually won out when I got the beautiful brown in the net successfully.

His belly was burnt orange in his spawning colors leading up to his buttery yellow jaw. His kype was hooked well and I knew any attempt to lip him would be as dangerous as putting a hand inside a gators mouth. His body was thick and big splattered black ink fountain blotches covered the rest of his lengthy body. 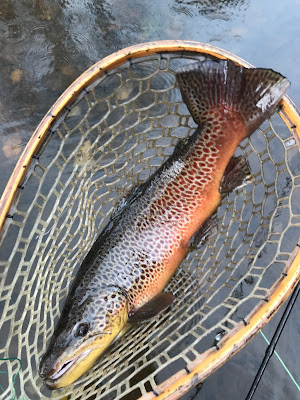 I wasn’t done quite yet though my body started to feel colder beneath my layers of clothes. The wind got a bit stronger also but I just didn’t want to give up. Normally, by now with two huge fish, I would of called it a day but I was, after all, having fun despite the weather.

After this one tore up the Triple Threat pretty bad I attempted to knot on another. It wasn’t easy with stiff fingers and it took some time and patience but I managed.

I caught a smaller rainbow and a smaller brown trout and was about to call it quits. I started to wade down creek towards the shallower water to cross. I was still making cast down and across when I noticed the arc in the line stop. Maybe I struck bottom in the shallower water? I figured if it got stuck I could wade into the knee deep water and just unsnag it. I yanked the rod back to set the hook anyhow. To my surprise, after the line tightened and rod bowed as if caught on an underwater snag, a fish rose to the surface and shook the hooked streamer like trying to get a live bumblebee out of its mouth. Water splashed everywhere like an explosion was set off on the surface. He went under and shot up creek in a haste still head shaking flexing the rod top sections in incomparable positions. Leader cut threw the water heading upstream in the wake of the fleeing trout. I had another biggy! 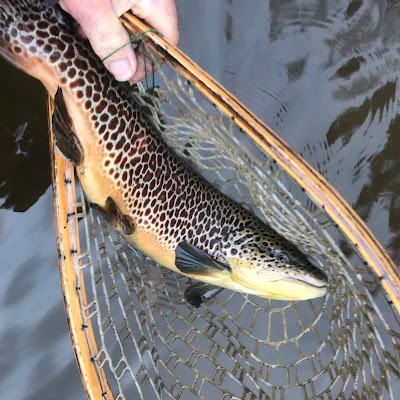 After that I called it quits. I saw no use of torturing my body or fingers any longer. I had an excellent catching day and big trout to prove it. I couldn’t wait to get into a warm truck and back to camp to thaw out. 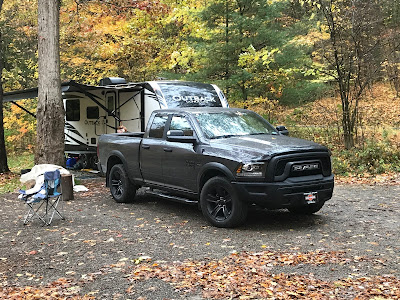 ~doubletaper
clarion, Pennsylvania, United States
Just a guy who's been around a stream or two. love the outdoors and when i can flyfish and take the cycle it doesn't get much better!! I live near the Allegheny National Forest so you might find me roaming around any given day with a fly rod in my hand!