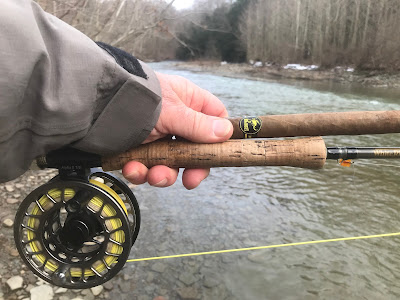 ‘On my second cast, with a Triple Threat streamer, I thought I had a snag on a ledge. I reared up and a steelhead rolled beneath the wavy fast current…..’

It was a busy hunting season and visiting Holiday that I hadn’t been up To Erie to fish for steelhead. The weather and climate wasn’t very cooperative after the Holiday season either. Looking like more favorable conditions I called Kevin and we made plans to hit the creek on Wednesday. When I left my house the truck thermometer read 18°. By the time we got to Erie it was around 34°. There was already 2 vehicles aside the dead end street we parked behind. We were still getting on our waders and gear ready when a crew cab truck backed in behind me. 4 guys got out of the truck in their brown neoprene’s like circus clowns out of a clown car. They grabbed their spinning rods and hurried across the road to the creek like they were some kind of firemen rushing to maintain a brush fire. We just took our time, made sure we had all we needed for the day, and headed to the creek.

As we walked along the path, upstream, we saw the water was low and clear. There were a couple of fishermen here and there in likely deeper holes I had fished before. When we crossed the creek to where I wanted to start there was no one on the side of the creek we wanted to fish from. There were two fellows on the other side casting minnows on noodle rods. For the rest of the day we had the ‘hole’ to ourselves.

The one guy using minnows just got done putting a steelhead on a stringer by the time Kevin and I got our packs on the shore and into shin deep water to start to fish. I casted up into the wavy fast current with a Triple Threat streamer and watched my fly line drift quickly with the current. I had a couple of split shots on the get the streamer down quickly as the fast wavy current emptied into a deep section. I could see below there was a ledge and I was hoping I wouldn’t get snagged up. On my second cast the fly line angled up stream after it floated passed the ledge and I figured I caught the ledge. When I reared up on the rod my line tightened slightly and I saw a steelhead roll below the surface. He must have grabbed my offering but I missed hooking him. I made another cast in the same fashion and watched again my fly line. This time the steelhead wasn’t going to let my minnow looking offering get away. He grabbed and took off just about hooking himself but I gave an extra tug to make sure as he sped away like a fox on the run. The line cut threw the water surface as he raced towards midstream and down towards the far bank. I held the cork grip tightly with the rod bowed half into the midsection. The fight was real!! Back, midstream, he paused and came to the surface with head shakes splashing water all around him. I could feel the rod tremble within my gripping fists with the on line activity. He went under and fought hard before I got him close enough for Kevin to net him. 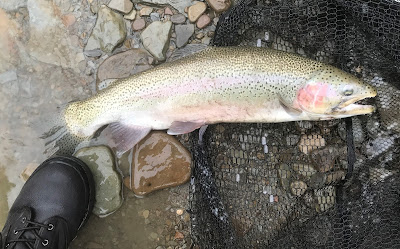 It was only a little passed 9 and I thought we were going to have a super fun steelhead catching day. I was wrong. It took till around 2:30 that I finally got another good hook up.

In the long pause that you wait for the steelhead to bite it gets you thinking. You notice your feet get colder more often. You step out now and then when you tie another offering on to get out of the cold water and to move your feet for circulation. You contemplate to go somewhere else since the steelhead aren’t biting during that long pause but do you really think they’re biting somewhere else? Even so, there might be other fishermen in the next deep hole and the next one and next one. You have fish right in front of you. They have to get hungry sometime don’t they?

To get myself through the boredom I’ll light another cigar and start conversations with the guys across stream. You bring up subjects in the short spurts of conversation until you find something in common. This makes time fly by a little faster and keeps you from being annoyed that the fish aren’t biting.

The sun came out and started to ascend behind the guys across the creek, behind the leafless tall trees. It’s rays filtered through the bare branches casting shadows upon the surface water. Maybe once the sun climbs high enough and shines directly on the water it might heat it up enough to activate the lazy steelhead, maybe or are they just being finicky? Even the guys across the creek weren’t fairing any better with their salted minnows. At times we could see the oblong steelhead below swimming but ignoring what we had to offer. When the guys called over that they were leaving and started to walk away is when I got a steelhead to take a sucker spawn I had been drifting. It felt like he swiped it on the move as it drifted down stream. He continued on his way across creek, after taking the spawn, and fought hard towards the far bank. I was starting to gain line and had him mid stream coming towards me. With a burst of energy he turned and darted back towards the far bank. All of a sudden I felt the arcing rod flex upwards and my combination of sucker spawns flew back at me. I lost him.

After Kevin went to the other side of the creek to fish from I had my next fair hook up. I was able to see three or four fish deep just out in front of me. They were holding deep just on the flats behind a ledge. They were just visible enough to see they weren’t hugging the bottom under the fast wavy current. The water was still pretty deep and with the indicator on I wasn’t sure if my offerings were getting down fast enough to them. I took my indicator off and, being they weren’t that far out, started to high stick the sucker spawn towards them as if nymph fishing. On occasion I would see one move as my offerings passed by but I wasn’t sure if they were moving out of the way or taking a look see. I had no fly line touching the surface so my offerings were drifting free of any drag. I saw and felt the leader lighten just slightly and I raised my rod up for a hook set. The upper section arced and I could see a steelhead beneath the surface in front of me head shaking the tight line. I suppose, seeing he wasn’t going to shake the hook set loose, he scooted out in the main body of water and half showed himself coming headfirst breaking the surface. He splashed water with the commotion before swimming deep and down creek further. I slowly waded in the shin deep water down with him trying to keep side pressure on him to tire him out. He wrangled and carried on downstream swirling the surface water that I could pinpoint where he was in the shallower water. Once he settled his head shaking disturbances he currycombed around like he was searching for a way to break free. His weight and persistence, using the current for support, made him too heavy for me to gain much ground getting him towards me for some time. When he started to swim upstream I was able to bring him closer. Kevin was on the other side of the creek so I didn’t have him to help net him. I got him to the shallowest water near me but when he felt the stones beneath he scampered back out in deeper water like a groundhog seeing its shadow. The rod arced towards his jaunt so I gave him line while I waded along the bank to grab my net. It took a few encouragements before I was able to net him. 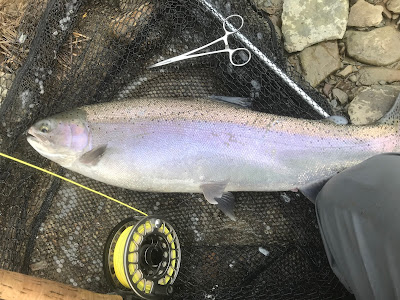 After that Kevin hooked up a couple of times. We weren’t sure if they were fair hooks or not but the one gave him a run for the money before the hook let loose and he came up empty. I hooked up again also. I thought I had him by the mouth when the big dingy colored male burst up out of the water head first. Once beneath he gave a hard head shake and was gone leaving me fishless.

My next catch was out quite a bit towards the far bank. I would give a big mend upstream when my sucker spawn fell to the water. I tried to keep my fly line off the quick current in front of me by extending my arm out and rod above the fast current. I saw my fly line tighten before I actually felt any pull and yanked the rod back. The hook found a grip and a battle ensued. He fought well like the others and I had to wade downstream again to keep side pressure on him to tire him out. I was pretty far down creek from my net but couldn’t get him to swim upstream hardly at all. He put up a good fight thus far and I decided to try and beach him. He was pretty tired out, or just gave up some, when I was able to bring him in the shallows on an island of stones.

I couldn’t see the sucker spawn in his mouth very well so I grabbed the neck of his tail with my glove net and carried him to the bank so I could make it easier to find and unhook the sucker spawn. 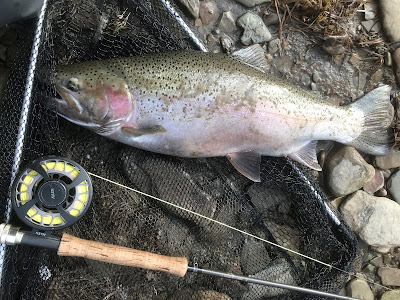 After that Kevin waded down creek and came back up over to my side. I told him the location I was hooking the fish and gave him the spot. In the meantime I fished downstream from him and hooked one more for the last time. He wasn’t that big but he fought well. I banked him also but I had evidently left my forceps back at the net where I unhooked my last steelhead. When I got the steelhead beached I was able to see the sucker spawn just at the side of his mouth and easily slipped it out without much trouble. I pushed him back into the shallow water and he swam away with a sore lip. We fished a little longer till about 4:00 and decided to head back. We saw a few fish in spots while walking and wading. Kevin tried for them while I watched and then headed down creek. My arm and shoulder was sore and being I caught a few already, wasn’t as excited to try and catch, or waste time, being ignored by the finicky steelhead.

We got back to the truck and called it a day!

~doubletaper
clarion, Pennsylvania, United States
Just a guy who's been around a stream or two. love the outdoors and when i can flyfish and take the cycle it doesn't get much better!! I live near the Allegheny National Forest so you might find me roaming around any given day with a fly rod in my hand!