Evening with Fast and Furious 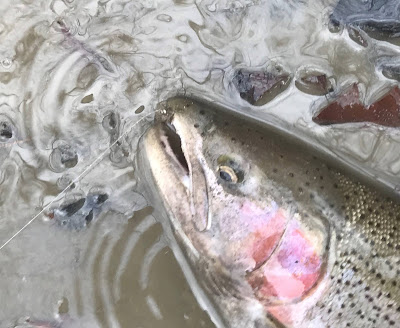 Early morning we found the crick water a little higher than the day before figuring it was from the snow melt. Yesterday was a tough and challenging day. The water, besides being low, was pretty much gin clear. The steelhead were easy to spot but weren’t too willing to eat. We all caught at least one steelhead fairly hooked but from early morning till almost the end of daylight wasn’t that rewarding as far as hook ups go.

This morning we found the crick stained from the melting snow run off. It kindly resembled the color of a cup of watered down artificial chocolate milk mix. 2 out of three of us caught at least one fish in the morning/noon hours. We were surprised we didn’t catch more being the conditions looked more favorable then the day before. Just after noon Jeff and I went back to camp for lunch and I took a quick nap to give my bones and back a rest. Early evening, around 2:00, I decided to go back out and give it another try. Jeff was still hurting some and decided to stay at camp and take it easy.

When I got to the same place we fished in the morning there were only a couple fellows fishing the same area. One was upstream where the water turned a bend into a wavy surface entering the long stretch of water I’d be fishing in and the other fellow was fishing the tail-out. The water was still chocolate milky stained but I was able to see the ledges of rock formations below the surface. I knotted on a crystal sparkle spawn and dropped a cream sucker spawn below that.

The air was cool with the sun above but not giving up much warmth. I could feel the sweat on the middle of my back but it was from the long walk in more than from the outside temperature. I was dressed for the evening weather once the sun dropped over the tree line so I was quite warm when I arrived.

Like trout fishing I don’t start making long casts across stream to more fishing looking holds. Instead I’ll gradually cast close and further my casts as time goes on. In this way I’m not spooking fish nearer to me with the slapping or drifting of fly line over their heads.

My first few casts were just out and upstream from where I stood in knee deep water. The current wasn’t very fast this close but I waited patiently for my indicator to drift far past me before each additional cast to not disturb the water in front of me. My forth cast was an easy roll cast up crick almost midstream. I made a short loop mend upstream and my tear drop indicator quickly straightened almost perpendicular upon the water surface telling me that my sucker spawn was pretty much near bottom. As my line was nearing a bottom ledge my indicator faintly dipped down and I reacted with a quick lift of the rod tip holding the fly line pinched between my fingers. The rod tip section arced with a tight line. I gripped the cork more tightly. The indicator popped out of the water as the tapered leader cut across the water surface, upstream, like a wire cheese cutter through a brick of cheese. The steelhead sped passed me, up crick, in a straight path and the speed of a fletched arrow on target to a kill zone. Once upstream the steelhead swan towards the far cliff and took tensioned line off the spool. The spool handle spun like a wooden well crank as a filled bucket falling freely down the well shaft. Once she was near the far bank she turned and sped down crick in the same manner. I tried to keep the rod tip arced with line tension as I cranked line on the spool as quick as an automatic retractable tape measure. The steelhead returned down crick about where I hooked her at. She fought with forceful tugs beneath the surface and her antics disturbed the water surface giving away her underwater position. We played a healthy game of give and take as she raced up and down the water column. Gradually her speed slowed and when I saw her swimming just below the surface I had a feeling she was tiring. I backed up towards the bank and she didn’t give up much of a fight before I got her to the bank-side. She wasn’t a big steelhead in length but her girth showed she had been eating well in the lake. 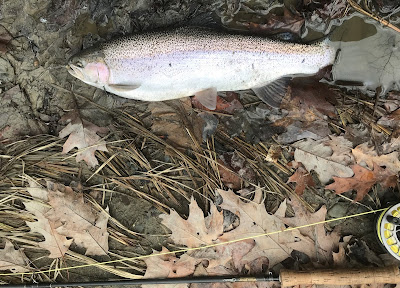 After I released her I cleared the dirt from the cream sucker spawn and continued my quest for another after I lit up a rewarding cigar.

Roll cast after roll cast I dropped the spawn further out in the water. I watched to make sure my drift was far enough and avoiding the sharp ledges beneath. I switched to a couple other colors and without a take just went back to my original combination.

I made a short cast out about a quarter of the way across the crick. I watched the indicator drift this side of a ledge. The indicator was just about over the ledge when it was pulled under. I yanked the rod upward hoping I didn’t catch the ledge. When the line took off upstream, with the rod bowed and line tightened like a banjo string, I knew I had another steelhead on the line. Maybe not as quick as the last but the force and tugs it showed while swimming upstream was enough to tell me it was a little heavier than the previous one I had caught. I gripped the cork handle with both hands and let it take line out of the reel. It didn’t swim as far upstream but when it decided to turn down crick it did it with a quick U-turn and a healthy jerk of the line. The rod tip flexed instantly and rebounded quickly pointing and following the steelhead down crick. At a moments noticed it held itself below and started furious head shakes and thrusts on the tight line. I felt every jolting tug in my clinched hands like trying to hold onto a 5 year old having a temper tantrum in the toy aisle. It seemed like minutes of the furious fighting of line and rod before he swam towards the far bank and with enough force I had to let more tensioned line out. For a while we played the up-crick, down-crick melee until he finally gave up some leverage and I was able to bring him closer as I backed up a bit. When he reached the leafy bottom though it wasn’t something he liked at all. He forcefully swam outward bending the flexed rod deep. It was a good thing I didn’t tightened the drag at some point and I was glad I had the fighting butt in my gut for leverage. It took a couple of trying forceful pulling on my part to finally get the steelhead safe and secure near the bank. The cream sucker spawn was just barely hanging on to the top lip of the steelhead. Any more fighting might have loosened the hook set and I would of never landed him. 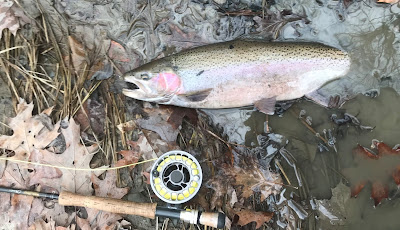 Well, by nightfall I only had one more missed opportunity downstream. It was in real slow current and I was getting quite a few snags on the bottom. At one point my indicator dipped down and returned to the surface as if the sucker spawn bumped a stick beneath. I raised the rod up to avoid the snag and to my surprised a steelhead rose to the surface. When I went to set the hook with a forceful yank of the rod the hook came loose and my spawn, leader and indicator ended up twisted in an overhanging tree branch. Light was fading fast so by the time I got everything retrieved it was too dark to fish any further. I headed through the woods and across the field to the truck.

At camp Jeff had a nice fire going in the fire ring. We sat around enjoying a couple of beers before dinner!