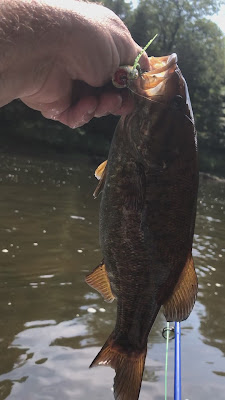 The sun was already up above the tree line when I got the float tube in the water. I figured a mile of fishing the river should be enough time to get a lot of fishing in without hurrying. I had my 6 weight fly rod, a few boxes of poppers and a box of streamers should I decide to fish beneath. I was excited due to the fact I haven’t fished for smallies for the past couple of weeks because of the high muddy river from torrential rainfall. The river was still a bit higher than I would of liked it but the color was a light tea stain. I find just after the river starts to clean up from being muddy the smallmouth are anxious to find something to visually eat. With the higher water I found they don’t hug the banks as much but are out from the banks searching for a meal. Even though I got out later than I wanted I felt I still had time to coax them into eating a noisy surface popper. 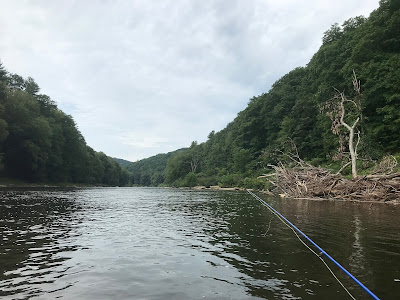 The morning sky was kind of puzzling with a few translucent gray clouds passing beneath the white clouded sky as if drifting in slow motion. The summer greenery of trees lined the banks with downed wood cover, that had been pushed down river from the flood stage river flow earlier in the week, which in turn should be good ambush cover for the hungry smallmouth. Down river I knew there would be boulders also lining the river banks which causes deeper pockets and cover. The lazy sun behind me brightened the tinted surface water enough looking like a wet airport runway as far as my eyes could see.

I started casting a popper just out from the banks as I slowly drifted in the float tube within the current. I reached for boulders, with my flippers, to stop my drifting when I could, to spend more time covering an area that looked fishy. I stopped myself out from the bank a ways and was casting into a back eddy cove when my first smallie rose to the popper with a splash. I hooked him in the lip and brought him to the float tube without much of a fight. Not a big one but it made me smile. 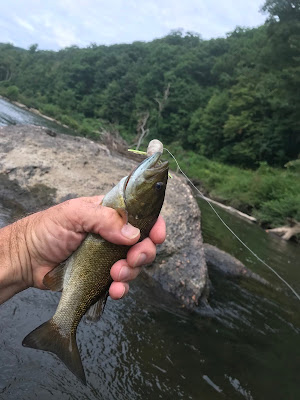 I missed another down river but by the way it tried taking the popper I felt it was smaller yet.

I was slowly feeling my way downriver casting the 6 weight fly rod towards the bank and out towards the middle of the river getting my timing right for longer casts. Out towards the middle the popper fell to the surface and I made a couple quick jerks on the line to cause commotion. Suddenly a fishy object surfaced after my popper with an audible splash. I reared back and felt the resistance in the arced rod. He swam cross current away tugging line like a Bloodhound on a hot trail wanting to be unleashed. I let him take line out as the Mid-Arbor clicked like hail falling on a tin roof. I had no hold on the riverbed so I was still drifting which didn’t help matters any with the fish in the current heading upriver and I floating slowly down river. I finally finned my way into some slower water and took more control of my catch.

He gave me a good fight beneath and surfaced a couple of times with vicious surface splashing before I got him to the tube apron. 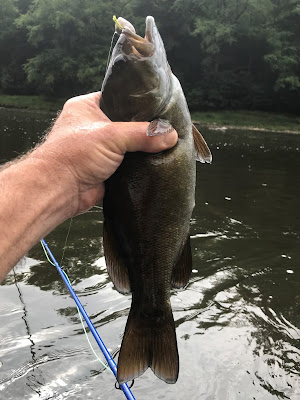 My next catch was no fluky size smallie either. He gobbled down the surface popper that hooked him in the tongue. There was little chance he was going to release himself as he fought desperately before I got him near to lip him. 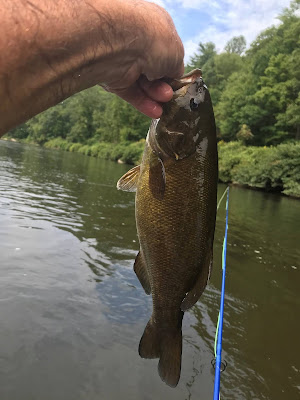 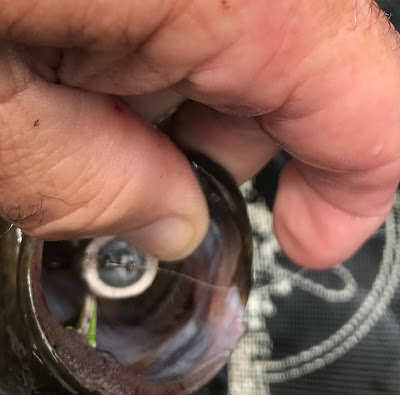 After releasing him I reached back in the rear side pocket of my float tube and took out a plastic zip lock that held my cigars. I took out an RP Toro Edge and lit it up. Smoke rolled off the lit end and into the slight breeze like a small smoldering campfire wanting to reignite. 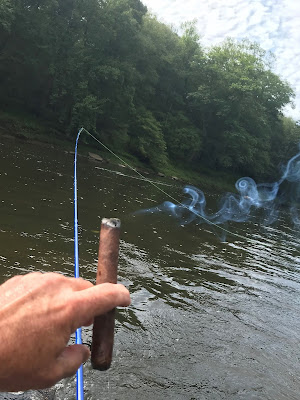 By now it was near 11:00. The sun was beating down a lot brighter and hotter. It felt good that I was hooking smallies and a few bigger ones to boot. Sitting in the float tube with half my body in the water kept me cool and not so much uncomfortable from the heat. I relaxed just long enough to get a few good puffs of the stogie before continuing down river.

Drifting, I casted out towards the bank nearly under a tall shade tree. From my point of view it looked deeper than the water I was tip toeing through. I made the popper gurgle a couple of times and was watching it swing causing a small wake behind while I was token on the stogie. All of a sudden a smallie sideswiped the popper like a dog grabbing a Frisbee disc in mid flight. I yanked back and the rod arced. All of a sudden the popper emerged from beneath and flew up out of the surface water. How I missed him I wasn’t sure. I mean he took the popper under and whatever happened beneath he was able to escape the hook. I was kind of mad. I single hauled line and threw it out towards the middle of the river. I was taking in some slack line after a couple of jolts on my popper when a Smallmouth came barreling half out of the water gulping my popper somewhere within the burst of water. I yanked the long length of line like I was mad and hard enough as if I wanted to rip the lips off the darn fish. The smallie went under and this time the popper didn’t show up on the surface. The arced 9’ fast action rod was well into the mid section by the time the smallie took off cross current like a camp chair in a wind storm. I had my wrist locked as line peeled from the spool and up through the guides. I hadn’t had a foot hold from preventing me from drifting downriver too fast so I finned rapidly to try to hold my position. I noticed a boulder just under the surface and tried my best to direct the float tube towards it to try and get a foot hold. The whole time I’m fighting this big smallie in the current who wants to go in the opposite direction. I had the rod butt in my gut keeping the rod upward and as much line out of the water as possible. I was able to get a foot hold on the submerged boulder to keep from drifting but that didn’t seam to be much of an advantage as far as this furious forceful fish was concerned.

I got him turned around and swimming downriver but still quite a ways away. I could feel the tightness in my forearm as I played the fish in the oncoming current. In no certain warning he leaped up out of the surface like a diver on a spring board. He did an unconventional midair tumble like a novice trying a simple somersault and lost his composure. The bass splashed down onto the surface, cannonball style, making a large splash flinging water in all directions.

From beneath he continued his fury with heavy fighting. In time I got him near a couple of times that I thought I could lip him but he was able to swim away with a heavy tail thrust. I finally got him close enough, and not seeing the hook, just grabbed him by the sides and lifted him to the apron. He was a good one. 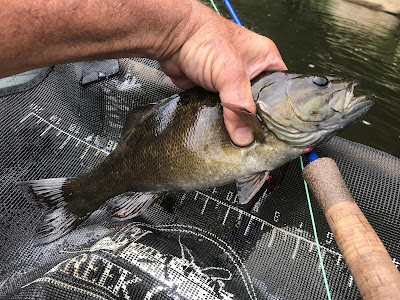 For a while after that there was a stall in the action. I had a few smaller fish attacking the feathers of my poppers and did catch one smaller smallie. I changed popper colors often but I just figured it was getting late in the afternoon and, with the sun beating down, weren’t too hungry by then. I finned my way to the far bank where there was shade along the banks and boulders under the tall forest trees.

One cast landed perfectly up against a half submerged boulder against the bank in the shade like a small mammal that had fallen into the river. I twitched the tip of the rod quickly and the popper gurgled up water like the mammal swimming. It didn’t drift too far when a smallie ambushed it out from the boulder. I reared back and again the line tightened and the rod bowed towards the hooked fish. He swam out from the soft water and into the current. We played tug of war for quite a bit before I got him safely out of the water also. He was a hefty ole' boy. 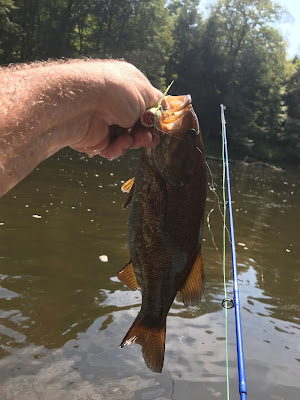 I was pretty close to my exit point by then. I tried a few color streamers underneath as I finned my way to the roadside bank without any good results. I was almost to the bank when a golden retriever came down the path to the river and entered the water. Behind him a camper followed with a chair, a small cooler and a beer in his hand. We talked a bit and he offered to give me a ride up to my truck. He didn’t have to twist my arm! 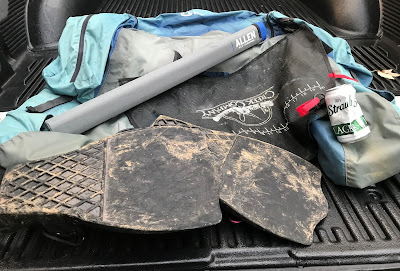