I consider a hat as a distinguishing attribute to the human attire. Clothes? Well, you just throw clothes on and change them the next day. Wash them later and sometime in the near or farther future you wear them again to maybe make an impression for the occasion. A hat is different, especially worn by a fishermen or hunter during there escapades of fishing or hunting. I’m not talking about the everyday common baseball style cap sportsmen wear while sighting their guns in or at some sports show or club meeting. These caps have logos, funny sayings and advertise the local sport shops. You can find these just about everywhere.
I’m talking about the unique, unusual but well fitted hat on a sportsmen head that just fits him. Makes him that unique character that distinguishes him from all others while a field or on the water. Some sportsmen wear such hats as lucky charms. Some as to show off while others don’t even think about it, they just wear the same old hat cause it’s been around for such a long hunting or fishing career and it fits just right. You know that one you just can’t get rid of, there’s a history about it. It’s almost like your best friend when you are going a field or hitting the streams. We all know some wear them to keep the sun off their eyes, straw hats for warmer weather and the insulated ones for warmth on a blizzard like condition during hunting season.

Let’s take some examples.
When I was a teen my grandfather, on my mother’s side, wore those expensive, Italian made, gangster looking hats. My grandfather was pitching out some that didn’t fit just right anymore and my cousin and I decided they would be a big hit, or at least get us noticed, at the teen clubs we used to go to. I think my cousin lost his over the years but I sort of got attached to mine. It was warm, repelled water very well and fit my small 6 7/8 size head just right. It made me look distinguished! This in turn became my fishing hat. I actually hated wearing hats any other time.
With a little modification like pushing out the crease in the top to make it a round domed hat. This would keep rain from accumulating on the top if it, than if it had a crease. Straightening the brim flat to again keep rain run-off from dripping down my back while fishing. The fancy silk hatband had to go. I had a black bandana I haven’t worn for years. It is just about 2” wide tapered at each end to tie around your head. It has the Harley logo on it with wings spread on each side. I tied this around where the silk hatband was. On very windy days the hat still wanted to blow off my head as I remember. So I just cut the thread and removed the inside leather sweatband. Walla, my fishing hat. Water repellant to a certain extent, warm in cool weather, a small brim to keep some sun off my eyes but still keeping my vision at large. It fits just right and stays on my head tight enough I don’t have to worry chasing it down stream on a windy day. I just push it down further onto my skull. It’s also nice having the tall enough dome, so when I’m weaving my way through streamside brush and low hanging branches, the dome takes the brunt of the hits which warns me of overhead danger. 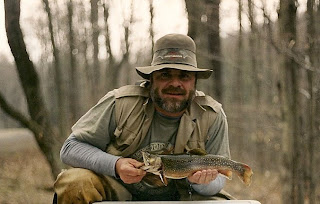 When I went bear hunting with a few guys back some years ago, one guy in particular named Harlan, had on an interesting hat. It was made of soft leather with a floppy brim. He kept the right side pinned up. He said that kept his bowstring from keeping in contact with his hat during archery season. The leather was a little darker brown on the inside than the outside. Maybe from fading from the sun like my favorite hat as it sits on my dashboard all year round. When we went out the first morning for bear he had tied 3 or 4 strands of orange ribbon to the leather hatband. The same orange ribbon you might find tied to trees for land markers. In Pennsylvania we must wear blaze orange on top of our head visible 360 degrees. The orange ribbons just hung there, Blowing in the wind but it was legal and that’s Harlan and his favorite hunting hat. You just have to make modifications. It fit him well and he commented to me when he hunts he doesn’t want to be bothered by other hunters. They see his pitch-black beard, beady eyes under that unusual floppy hat! Well, would you go and talk to some person you seen in the woods like that with a rifle in his hands?

Rusty, whom I actual taught the finer skills of trout fishing to, and I got into the cowboy hat thing when we were in our twenties. He wore a black cowboy hat. One of those you swore he was wearing the wrong way. You know the tallest part of the dome was in front. I think I’ve seen Garth Brooks wear one. I liked the old civil war style officer’s hat, complete with tassels. The tassels were too long when I got the hat but I just put another knot in between to shorten them so they wouldn’t hang over the brim. These hats were really great on sunny cool days. Maybe not so good on windy days and definitely not comfortable on hot days of fishing. It was great when we wanted to find out where the other might be on any certain creek. I’d ask anyone on the creek if they seen a blonde haired guy with a cowboy hat on. They usually knew whom I was talking about. Here in P.A. there aren’t too many fishermen that wear cowboy hats. Now a-days Rusty just wears a small, brown felt hat. Sort of in the style of what an Irishmen might wear. He even keeps a small feather sticking out of his hatband. I don’t know how the hat stays on his head though, but it just sort of sits there and doesn’t fall off. Now when I look for him on the creek I just ask someone if they’d seen a guy that looks like a young Kenny Rogers with a small brown hat on. They know whom I’m talking about. 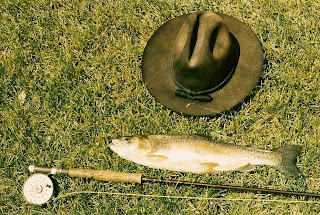 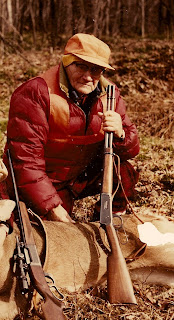 I remember my second year out steelhead fishing. I was still learning how to catch them. I was by myself and didn’t feel confident yet. It was a cool cloudy morning. Looked like possible showers at any time. After gearing up I looked at the hat rack in my van. I always keep a T.U. hat inside at all times, Rain and ball caps don’t go well together. My new short brimmed felt Harley hat, with its leather hatband, sat on the Coleman stove. I figured it was too new to take out on a day like today. I was by myself, and being the day was miserable looking, I opened the passenger door, reached on the dash and flopped my favorite, sun faded, fishing hat on my head. I felt I was just in that grubby mode, not wanting to talk to anyone and get serious about catching some steelhead. I ended up having a fun day with at least 12 hook ups. Landed four on my fly rod. The last being a 28 ½”male. What a beauty. A friend built a smoker that fall and wanted to try some recipes for smoked steelhead. The big male came with me. I took some pictures of the steely hanging over my 25” cooler for verification purposes. 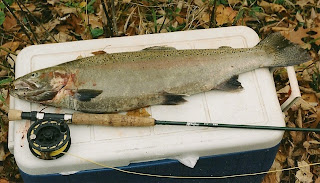 I broke down my rod and put it away. I jumped in the side of the van to change my cloths when my favorite hat came into contact with the van ceiling. I sat back on the bench seat. Took off the hat and Frisbee threw it between the front bucket seats. It bumped against the windshield and came to rest in the middle on top of the dashboard, the Harley emblem and wings facing directly towards me. I finished changing cloth, grabbed my Flyshop cap and put it on. Jumped into the front seat and headed towards home. I looked at the hat and said out loud “we did it!!” I swear if the hat had eyes it would of winked at me. Than I realized I was the only human in the van and I was actually talking towards my hat.
After turning onto bear creak road, I lit an imported cigar that Jeff had given me. I turned my favorite hat around on the dash so the wings were facing out the front window as usual. Thought of all the steelhead I caught earlier. Luck my butt I thought, got be skill from here on out. I patted the old hat …
_________________________________-~doubletaper