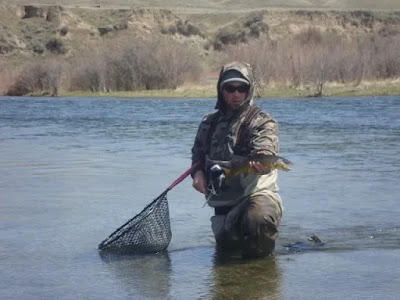 We woke up Monday to find an inch or so of snow accumulated on the vehicles. We left Pennsylvania in T-shirts and to get away from the white stuff. Now here we are in Fort Smith ready to drift float the Bighorn River and it snowed. Soon the snow would disappear though because it will rain. Rain all day off and on under the gray big sky with cold winds that will blow down from the mountains. We dressed warm with winter hats and raincoats to keep our head and clothes dry. It was windy outside so I figured my Winston 6wt. fast action Vapor rod would be the best choice. 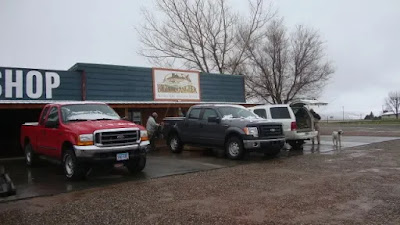 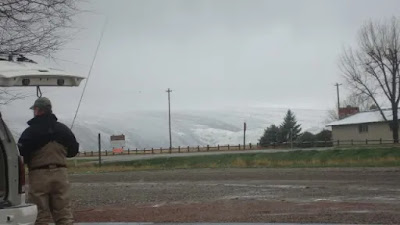 After breakfast we met our guides. Brad and Mat would pair up and have Don as their guide. I paired up with Dave and Ryan will guide us.. Ryan shows up in inclement condition like the inclement weather. He can’t breathe through his stuffy nose that dribbled practically throughout the day. He coughed and wheezed now and then and got to the point he even put Chap Stick on his nose from practically rubbing it raw from wiping it so much. We found out, as miserable he seemed, he didn’t give up or hamper our float. We found he was top notch, got us on fish and didn’t mind circling back upstream when we got hook ups in good holes.

Before we lifted off Ryan knotted extra line to our tapered leaders. The flow was 5,000 CFS and said that we most likely won’t see any top activity. This time of year it’s usually around 2700 to 3000 CFS so with the heavy flow there will be a lot of food washed down the river beneath. There won’t be much reason for the fish to look up for midges or BWO. He attached a tandem set up of flies and three, yes three split shot above this. Just a few inches from our fly line he attached a small white balloon indicator. So here we had three split shots on about 13 foot of leader/tippet drifting under a white balloon, this would be interesting. 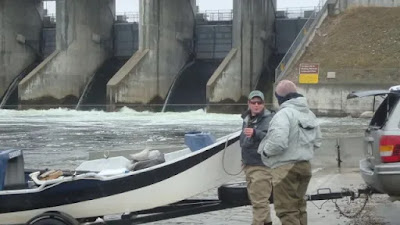 Out at the ramp at the after bay he got the Clackacraft in the water with all our gear. The more experienced indicator fishing Dave took the back seat and I sat or stood up front wanting to get any advice from the other two. We launched out into the rough water from the dam release and started our journey downstream. The fist drift would be under the cable wires. I hauled back the Winston Vapor 9’ 6wt and the chunk of lead followed. I felt the rod load with the heavy weight and than cast out into the wavy water. The weight splashed down far enough from the boat as the balloon floated and drifted high atop the water. It didn’t take long for Dave to hook up with the first fish to break the ice. The day started with him hooking up about 3 to 1 against my hook ups. He’s that good, and I figured I wasn’t going to keep up with him. Later on I kept pretty much even but he was pretty much on throughout the day. There were areas he would be catching fish and I wasn’t. The guide would switch us up while wading and he would end up catching the trout in the exact same place I was fishing and fishing with the same nymphs. It didn’t bother me though it just gave me more confidence that there were trout wherever Ryan put me, I just had to get the right drift to catch the trout.

I’ve read books that the authors claim that the Bighorn River is considered, by a lot of experts, to be one of the top three places to trout fish in the U.S.A. and by some the world. The fish are big and plentiful with the average in certain years around 16” to 18” being caught. The water has plenty of food and the bottom conditions, with flow, are ideal for growing good strong healthy browns and ’bows’. We found this to be true even in the rainy, cold, windy nasty weather conditions.

By the end of the day, around 5:00pm, we both hooked up and landed over 30 trout. When we were catching small trout in the 10” to 14” range Ryan wouldn’t waste time in the area. When we were catching ones in the 17” to 19” range he would double back and we’d try the drift again. We only waded three times during the whole day largely due to the many other fishermen and woman who were wade fishing in the harsh conditions.
It turned out to be the best worst weather fishing day I stayed out in. I didn’t have much of a choice being we were in a boat. The catching was something I couldn’t imagine before we went out. Big healthy meaty fighting fish in fast moving current. Rainbows and browns leaping occasionally and coming down upon the water splashing like big steelhead. They’d practically fight your line and rod right up to the boat not wanting to give up until they felt corralled in the net. They didn’t mind getting their picture taken either, most of them seemed to have known the routine as they stayed still in your grip.
I didn’t get a lot of pictures the first day out because of the constant rain and drizzle but it was a memorable excursion none the less with even better days to come on the Big Horn. 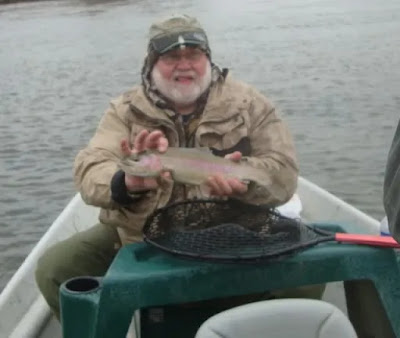 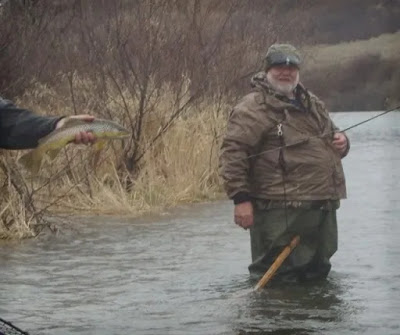 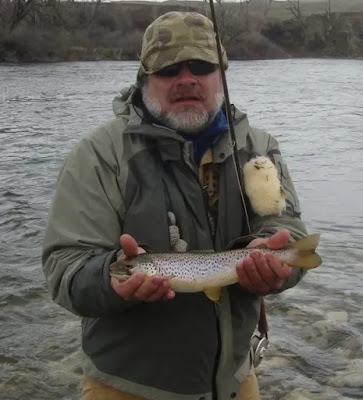 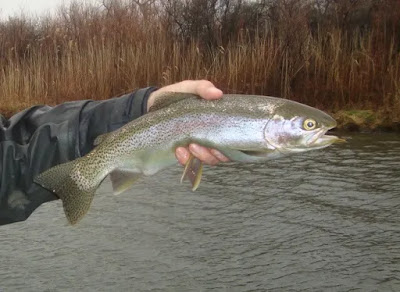 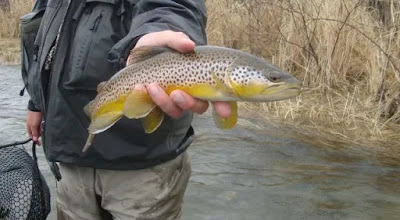