Troutslammer in 'The One that Got Away' 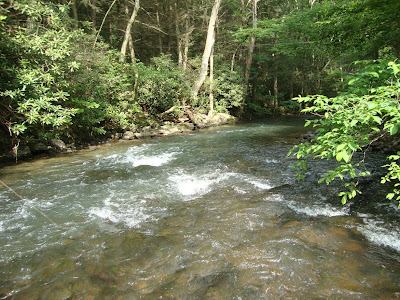 Troutslammer in ‘The One that got Away’
Father's Day 2011

In his Gilligan styled fishing hat and resembling the scarecrow, from the Wizard of Oz, only in chest waders, Troutslammer was good entertainment for Fathers Day.
In this episode Troutslammer took the spot light. It was almost as if I was watching a silent movie in real time.

I watched as Troutslammer stood there, hunched, looking intense. His fly rod bent into the middle and a tight line aiming deep towards the water falls. It was as if he had a snag but wasn’t yanking on the rod to dislodge it. He began to slowly tug the rod back and forth trying to pry whatever it was on his line to move.
I watched, as whatever it was, started to move out from the falls downstream like a waterlogged saw log rolling along the bottom depth. TS just hung on as he watched his rod and line move downstream with this unseen creature. I know I asked him what he had on but he was so engrossed in his catch he didn’t answer me.
TS cautiously stumbled along the round rocky shoreline following the saw log. The saw log stopped in the deepest pool of water as if waiting for TS to catch up. When TS positioned himself across from the deep holding fish and applied side pressure is when the saw log came alive. With underwater tugs, pulls and with the rapid turns being so fierce beneath it caused turbulence on the water surface. TS stood his ground trying to get the creature under control with quick rod movement but by the looks of things it was going to take awhile. I had my camera ready to shoot an action shot but TS never stood still enough for a non-blurred picture. After time it looked as if TS had him under control as the creature rose from the depth. (clap clap)
From my position it looked like a dark rainbow because of the maroon color I was able to distinguish from the subsurface fighting fish. TS assured me it was a brown, the biggest trout he ever caught in his life. TS had his net ready as he tried to steady his rod hand and arm up to bring the big brown in.

“I ain’t going to be able to get him in the net” He commented over and over again. ( Though he spoke I pictured the words at the bottom of the screen)

I stood helpless as I watched the 2 foot wild brown turn sideways than shot away from TS’s net back into the deep water. (WoooooW!!)

Line shot through the rod guides towards the angry trout. The trout decided to take the fight downstream and muled his way down creek with TS in tow. He stumbled along the rock ridden shoreline until the water got shallower enough, about thigh high, that he could enter into the water safely. They tussled a bit but it was obvious to me TS wasn’t gaining much more control or confidence as the big fellow decided to take him into the shin deep shallow riffles.
I knew this wasn’t going to end up good! I laid my rod down on the bank and started to follow the action at a slower safer pace.
The fish headed for the far bank as if it knew the water channeled deeper after running over a rock shelf. TS practically ran across the water, stumbling now and then, trying to keep up with him. Next thing I seen was the trout splashing about in the shallows, still trying to get away, as TS would stoop down now and than trying to net the escaping trout. (Splash splash!)
Nearer the far shoreline, around some outcropping of bigger rocks, the trout found deeper water to hold up in. When TS got to its location he found the trout had looped his leader around the big rocks. (oh no!)
TS line went slack as he got nearer the trout but because the trout was still hooked and leashed to the rock it couldn’t get free and started to thrash around. (Thrash, thrash!)
Next thing I know is TS let his rod fall behind him, on the stony bank, as he got on one knee trying to scoop up the helpless leashed trout. I seen splashing about and the trout broke free and tumbled into the strong current that emptied into a bank-side deep pocket. TS stood there, angry and in disbelief. (sob, sob)

Troutslammer had a good day pulling out some nice size wild brown trout on Sunday with nymphs. We hoped to get into some dry fly action but it wasn’t until just before dark that I managed to hook into the sporadic risers. The brook trout I caught on dries didn’t match up to the lengthy brown trout TS had caught earlier. Over all it was a great day to be out fly fishing in the cool water in central PA. A creek neither of us had fished for some time.

Thanks Jim for the entertainment and you definitely owned the day! 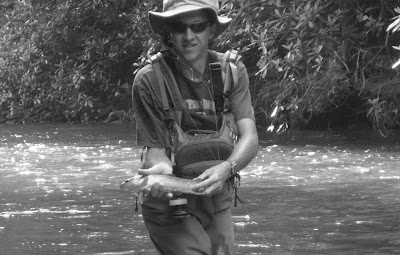 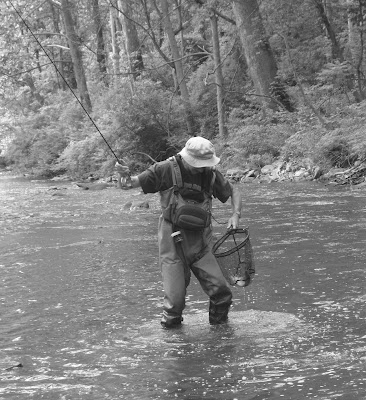 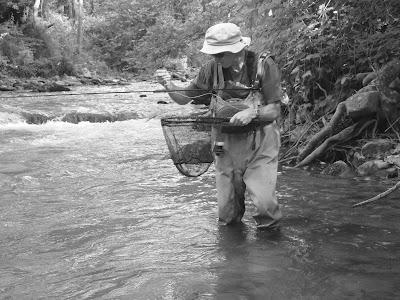 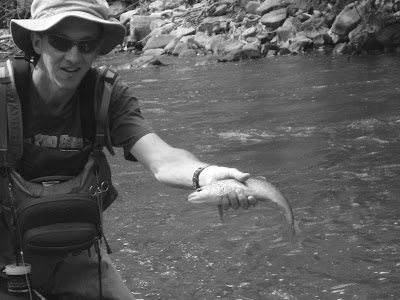 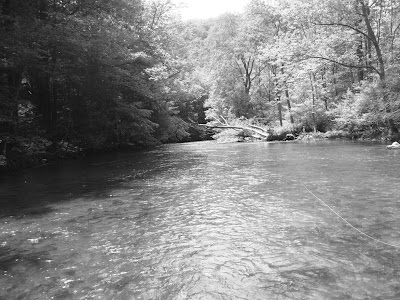