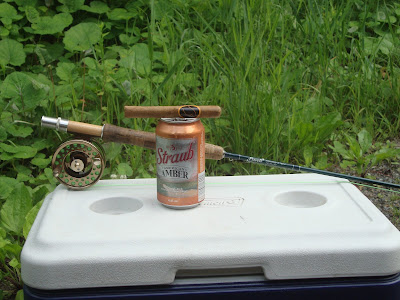 Due to the occasional storms and an abundance of rain the past week left the rivers and bigger streams muddy. On my way through the Allegheny National Forest I find that even the smaller mountains streams, such as Millstone, Toby Creek and Little Toby, are pretty well stained and running fast. I know there will only be one place worth trout fishing and that would be tailwaters and I am headed that way.
I check out the creek before getting my gear on. I figured it would be clear but I am surprised that the water level isn’t higher. It is near perfect as far as I am concerned. Back at the van I put on my ½ priced waist waders, from a wholesale supplier, and decided to use my $80 and some 4 weight, 7’ 6” Powell rod I got a deal on back some time ago. To this I attach a Double L, LL Bean mid arbor that I paid part of the cost with a birthday gift certificate.  I think Cortland 444 DT line is the best double taper line around but I’ve heard so many friends talk about Rio lines that I decided if I get a chance I‘d buy one. Rio lines are too expensive for my blood but I got the Rio line on sale thru the internet without shipping so I jumped on it. The weathermen said there’s a chance of rain till 10:00am. So I decide to wear my light rain fishing jacket. If it downpours for too long I know the water will seep thru but it will be better than wearing my heavy Gortex rain jacket. Being that it’s suppose to get in the 70’s and high humidity I would feel like I’m in a sauna and simmering in my own sweat inside the heavy rain jacket. Besides that, my trout fly boxes and stuff are already in my rain jacket from last trip out.

As I roll up my sleeves the biting bugs are already swarming this morning at 8:30am to see which species will draw the first human blood. I take out the Deep Woods off and pump some spray on myself not forgetting my ears and neck. I put on a well worn cap, grab some cheap cigars and stuff them in my pocket and head towards the creek.
The water has to be around 60 degrees as I feel the cool water flowing around my waders. The sky is overcast with clouds overlapping trying to block out the morning brightness. Birds chirping tell me that if it does rain it shouldn’t be much of a shower. There’s a slight breeze that passes now and then and with the cool rising moisture of the cold water gives some relief under the rain jacket. My surroundings all appears to be green! Green grass, green trees, green brush everywhere along the banks and small islands. 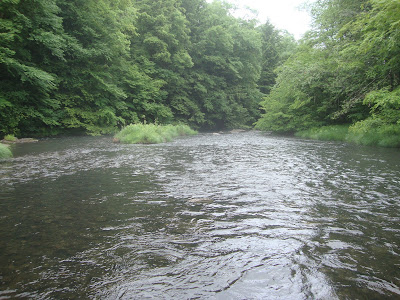 I knot on a Woolly Bugger and fish my way down creek a ways. I think I’m alone but when I turn the corner there is a guy nymph fishing the deep water along the far bank. I wade around him and continue on. For an hour I cast ants and beetles in the shallower water along the banks and under tree branches. I drift and strip Woolly Buggers in the deeper runs and riffles without even a bump. Well, that’s the way it goes sometimes. Sooner or later I’m bound to catch a fish. I light up a cheap Bahia stogie; I got on Cigar Bid, and continue on. 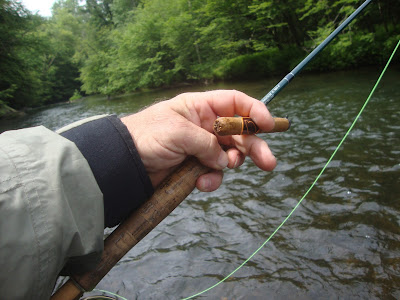 I feel a couple of short taps on the bugger as it drifted across the shallow riffles. I tease the trout long enough that I finally get a hook in its mouth. It turns out to be a small wild brook trout but it gets off when I get it to my hand. A short time later I finally get a good hold on a trout and bring in a pretty small brookie. 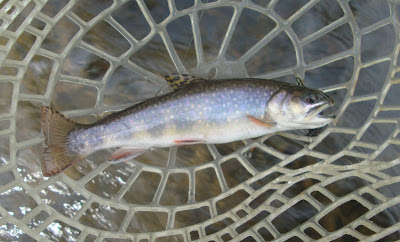 From then on the thrills keep coming. I catch a few more small brook trout on the bugger and also on a couple of dry flies. Three different sections of creek I have the pleasure of getting into some good dry fly action. The rainbows aren’t all that easy to fool though. I have to land a soft lay down of the dry and the perfect drift. Many times I see a trout rise to my dry fly and turn away. It takes time and persistence but eventually I get them to take my imitation. I catch them on small Sulphur dry flies early and Caddis later on in the afternoon. I have more lookers of my beetle and ant patterns than I have getting a trout to grab it.
I never get bored enough to nymph fish. Dry flies most of the day and buggers when I am moving keeps me entertained with trout and thrilled to the bone.

The wild trout are quick to rise and I have to be ready at all times. The rainbows rise most of the time, in the slower water, with a little more caution so I am able to see a flash or the body of the trout as they rise to my dry fly. In the faster currents the rainbows are pretty aggressive with splashing takes of my surface imitations.
As far as the takes on the Buggers go it is a matter of hits and misses. Most of the time it takes some twitching of the rod tip to get a trout interested in the moving bugger. Most of the times the takes are short taps. In the evening I get into some bigger rainbows that take the bugger more forceful and give me a run for my money.

It turns out to be a outing, cheap gear and all!!

Here are some of the thrills of the day. 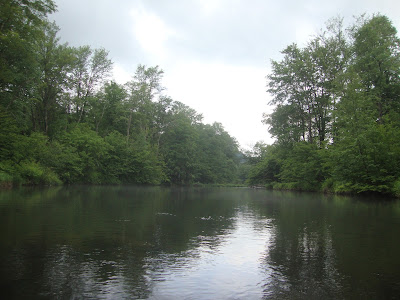 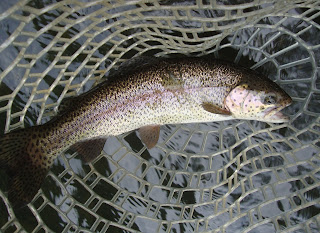 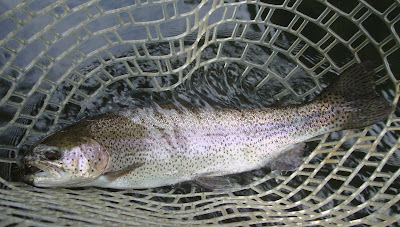 Some of the other rainbows 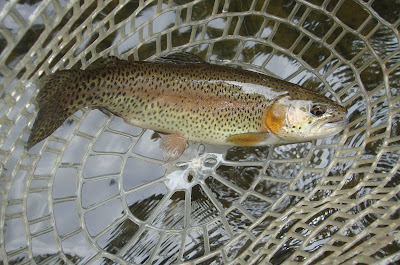 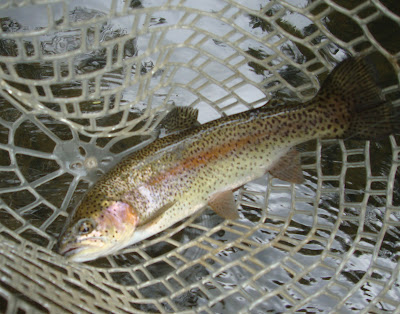 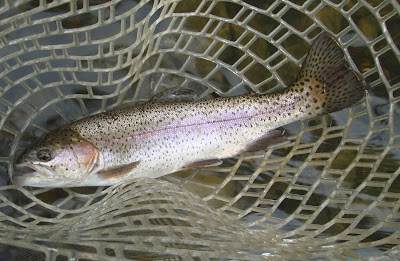 Caddis was the ticket later after noon 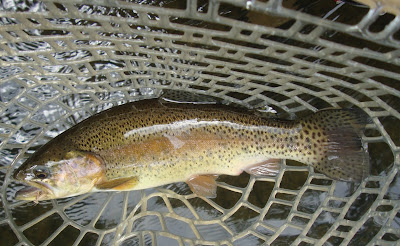 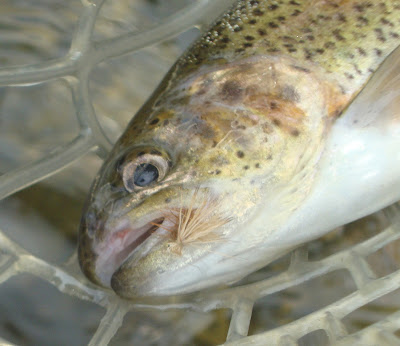 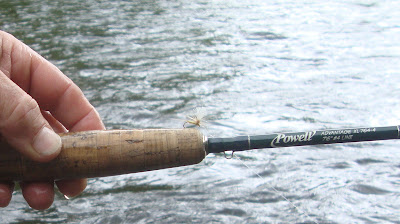 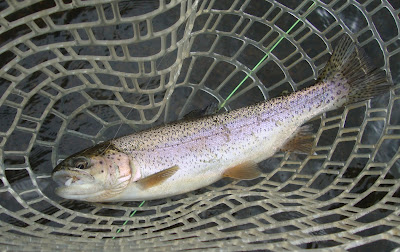 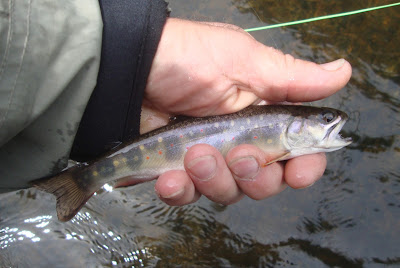 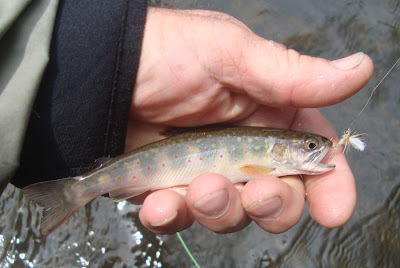 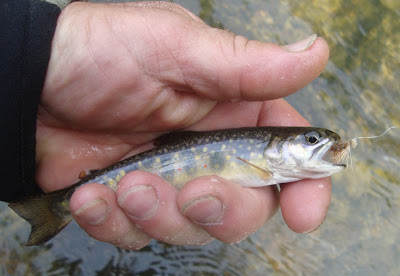 One of my bigger brook trout 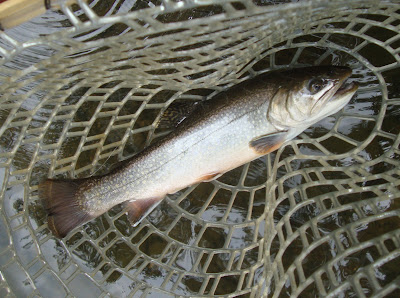 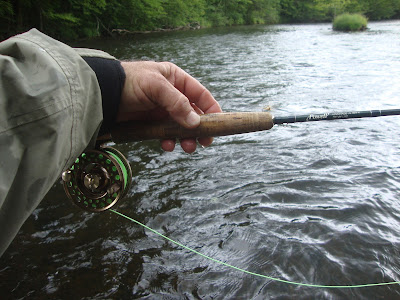