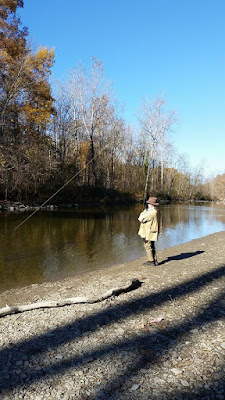 Jeff was up at camp for the week. He was archery hunting for deer as well as small game. He also was interested in going up to Erie for steelhead. We decided to get together on Tuesday and head up. On Monday I called a friend, who lives in Erie, about conditions. He said he was also going to be fishing and it just so happened that he was going to be fishing up creek from where we decided to start out.
As the morning turned out it went as planned. We got to the creek just after day break. Walking up creek, from where we parked, we found another fellow fishing a deeper section in which we wanted to start. It just so happen he was leaving. He hadn’t caught anything but wished us luck. We fished for some time but couldn’t get a strike either. The chilly morning was gradually warming and the dusky sky was turning blue. In about an hour we decided to head up creek for better water.
Jeff moved up creek pretty quick as I slowly fished my way up stream. The water level was low but I still searched the shallows for holding steelhead. Any deeper hole along the banks I gave a try to maybe hook into a fish but hadn’t any takers.
It wasn’t hard noticing the mailman once I got close enough to where a lot of fishermen were fishing. His straight up posture and long noodle rod was a figure I could spot from some distance away. He was fishing his home tied egg sacks under a float near the back end of the slow current flowing deep pool. I noticed Jeff was fishing the quicker water that flowed into the pool at the head on the other side of the creek. There were about a half dozen or so other fishermen around the deeper water trying their luck also. I posted up and started fishing just up from the mailman. We carried on a conversation as he said he had already caught one and a couple of the other guys also hooked up. I was able to see the pod of fish the mailman was drifting his offering into. Once he got one to take he set the hook and I watched as he fought the steelhead like a natural pro at it. 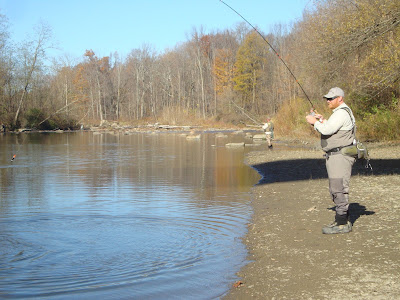 Taking a break, after catching the steelhead, he let me give it a try to the same pod of fish.
I had a minnow imitation and began to drift it by the pod of fish. It didn’t take long for one to grab it. The fly rod flexed downward on the hook set and the frisky steelhead gave me a good running battle. The steelhead had lots of energy in the slow moving water so it took awhile to tire him out. I held the butt of the rod into my gut as I waited for the chance to start reeling him near. 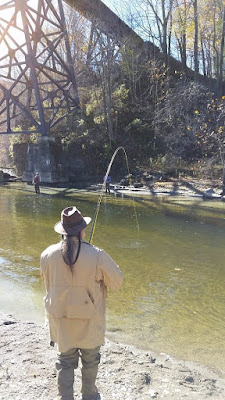 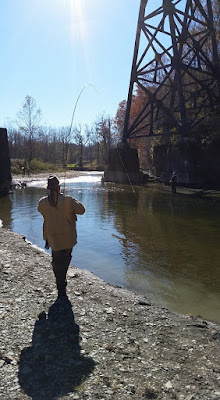 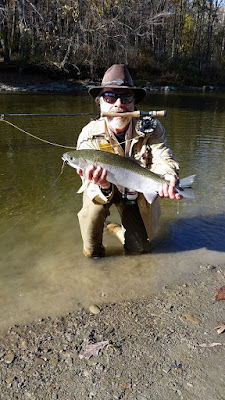 After a couple more caught fish things slowed down as the warmer it got outside in the slow moving water.
Across from where Jeff was fishing was a log jam up against the bridge pylon. The water between him and the jam was the faster wavy water that tumbled into the long deep pool. I stood up creek from the log jam, which was on my side of the creek, trying to decide how to fish it. It was obvious that those on the other side of the creek wouldn’t be able to get a good drift near the log jam because of the quick current in front of them. I had a better chance and added a little more weight to get my steamer down beneath the quick current.
One of my casts I was able to direct it into a seam just off from the log hazard on this side of the rougher current. The line pulled and tightened and it didn’t take much effort to set the hook. The steelhead immediately swam into the faster current and down creek into the slower pool. I yelled out “fish on” to let those downstream aware I had one coming their way. They reeled in quickly as they seen the surface water churning from the underwater antics of the fighting steelhead. When the steelhead went air born it was pretty awesome to see. His chrome sides glittered from the sun rays as the sight of his body was obvious one of the bigger steelhead caught thus far. I had no way of following him down creek because of the deep fast current, the log jam and the bridge pylon. I had to play him towards me somehow keeping him away from the hazard of the log jam and the fast surface current. I was tiring him out, as I thought, the longer he fought down creek. I had him coming nearer the log jam, beneath the water, once but he turned and took off with a burst of energy.
There was a slow eddy just in front of me off from the quick tumbling water that fed the deep pool. My objective was to get him into this eddy where I should be able to than muscle him to the bank. Keeping him away from the log jam was a problem but the length of my rod should keep a tired fish away as long as I kept it extended beyond the logs. My other thought was to keep the rod tip nearer the water surface in hopes that I can bring the steelhead in beneath the turbulent surface water. I was getting the fish coming in the way I wanted as I’m sure the other fishermen were trying to figure out how I was going to get him landed. When I got the fish away and upstream of the log jam I was feeling pretty good about my situation. I had the rod tip down as I wanted and I could feel the fish reluctant about swimming against the current. Than it happened. The steelhead came to the wavy rough current surface. I lifted the rod and the current swept the fighting fish down creek with great force. I hadn’t adjusted the drag during the whole fight but the force was stronger than what the drag would allow at the time. I felt the lightness of a loose line and watched as the steelhead submerged down creek. When I got the line in the weight of the heavy fish as well as the strong current force opened the hook gap wide enough to lose its tight grip.
After the mailman left Jeff and I stuck around for another hour or so fishing the deep pool under the warm sun. I caught a couple more with the streamer. One being pretty finicky and not wanting to quit the fight. 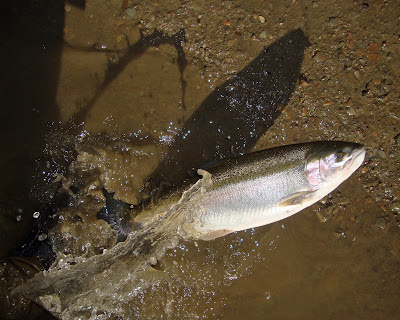 After things got boring we decided to walk back to the truck and visit another section of water.
The one place we ended up was where a few other fishermen were casting along the far bank wall where a few steelhead usually hold. With the low water conditions there wasn’t much use in walking the shallows trying to locate fish so we stuck around here and fished between the other guys.
One of my many casts was up against the far cliff and sank with the slow moving current. I watched the fly line as it arced down creek. The fly line budged just enough that I noticed. I reared back up creek on the rod and I felt the resistance of a fish. The steelhead fought down creek with lots of energy. I managed to tire him out and get him safely to the bank.
I fished a short while longer before we decided to call it a day and head back to camp. 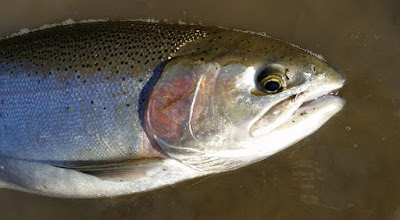