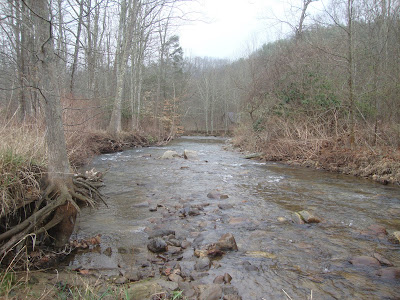 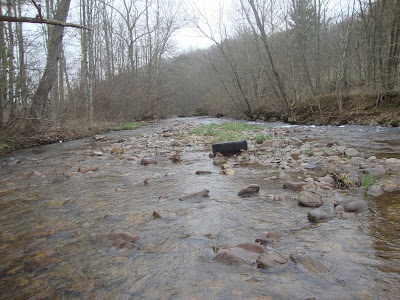 In the shallow riffles I kept the rod tip high enough not to let the added weight wedge between any bedrock. In deeper sections I kept the rod level or slightly towards the water surface depending upon the swing and depth of the water.
I stuck with the bugger as I slowly waded and fished downstream. Occasionally I’d stop and observe the backwoods and surrounding. 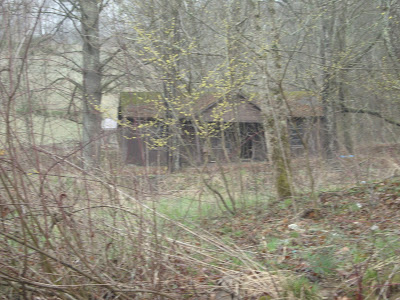 At times I had to climb over boulders to get a better position to cast the bugger in good looking locations. Other times I climbed over boulders just to make my way downstream. There were times I caught a branch or two I wasn’t aware of. I always made an extra effort to retrieve it from miscalculations or not observing my clearance when roll casting.
Wham, a trout tags the bugger on the swing! 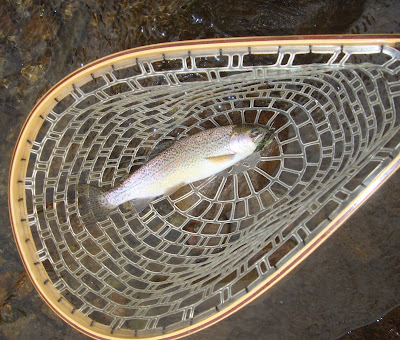 Wham, a nice brook trout slams the bugger as I twitched it in a slower current pool and puts up a good struggling fight against faster current. 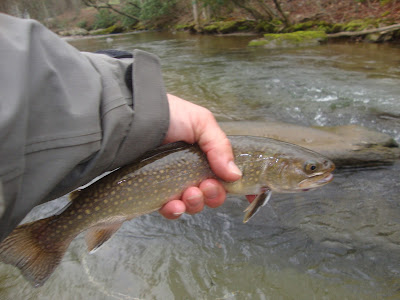 Wham, a rainbow swipes and gets hooked as I strip the bugger towards me. 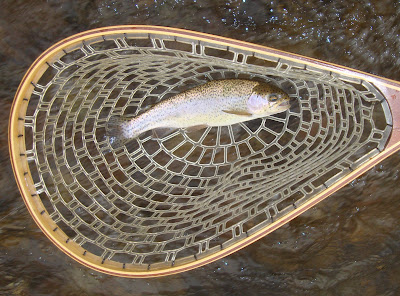 There’s a good deep current flow along the far bank feeding a large pool of water, as well as the slower main flow, entering very deep water under a rickety old wooden bridge. I catch two hearty rainbows in the deep wavy current along the bank. 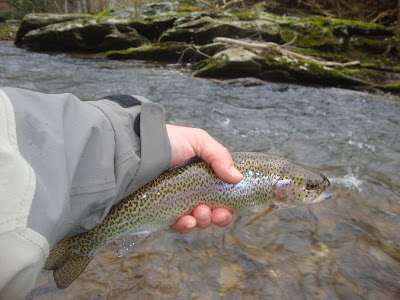 I try and try again to hook a trout in the deeper water but fail to get any action. I know there has to be fish in there. I try adding more weight to the leader but still no strikes. I give up, wade out to the bank and follow the path that crosses over a dirt road that leads to the bridge.
On the down side of the bridge I walk along the bank a few yards from the bridge. I peer into the water beneath but it is too dark and deep to see the bottom. Just for the heck of it I took off the extra weight from the leader. I make a backhand sidearm cast under the bridge and strip the bugger back towards me in the oncoming current. On my second attempt I felt a little more weight might get my bugger down deeper sooner before being swept by the current. With the added weight I was able to get the bugger further up creek under the bridge. As I was slowly taking in line I saw the slack in the fly line loop downward. With a long pulling strip of the line and yanking the rod upward the line tightened. I saw a flash within the deep water. The trout darted to the far side of the bridge block wall as I let the fly line slip through my pinched fingers with tension. The trout did a quick u-turn, down than up creek and dipped deeper. I knew the trout couldn’t go very far upstream past the bridge caused of the boulders so I let him tug the flexed rod not giving him much line. After his failed attempts of freeing himself he turned down creek. When he passed before me is when I realized this trout was bigger than what I originally thought. His long body flashed in front of me on his way by. He was now struggling down creek from me churning up the shin deep water. Quick head shakes and short darts didn’t set him free. The Demon rod flexed deep with each jolt while my line hand controlled the line tension. I took a few steps down along the bank and stepped into the water. With the movement he swam to the far bank remaining down creek from me. Again, with the short rod and now with current flowing against him, getting him towards me wasn’t going to be easy. With him struggling a few yards across from me I stretched my arm out holding the wooden net handle tightly. With the rod high and practically behind my head I had the trout coming nearer. Struggling but inching closer I scooped his body into the net.
With a kype jaw and hunched back I had a feeling he’s been in the creek for awhile. 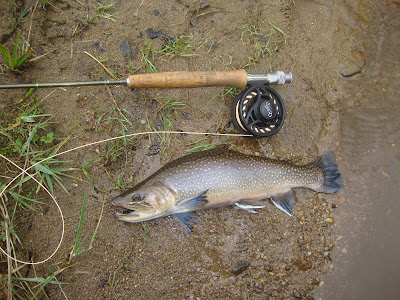 Down creek I found a deep flow where the current would sweep my bugger under a wedged log with the right drift. The log, I guess, was about 2 feet above the creek bed with a foot or so of water flowing over the log. There was no way to master the flow with every cast but when my bugger flowed beneath the log I was almost guaranteed a strike most of the time. I think I hooked about a half dozen times in this one section. 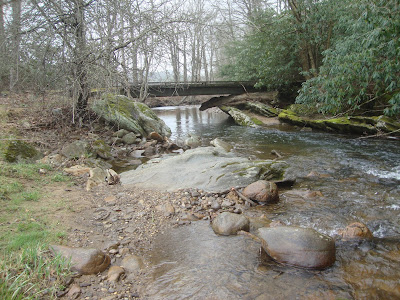 Looking downstream there was so much more trout holding water but I knew I must be going. I got back to the truck around 1:00. I had about a 7 ½ hour drive ahead of me. I wasn’t sure how far I was from the interstate but I had a feeling I’d have a lot of twisting winding roads to get there.
Well, the biggest fish didn’t get away but I just didn’t have my camera with me to capture the moment. I’m sure glad I brought my net along.

On the drive home I thought about my past week or so. I got to visit with a friend in Kentucky and my two boys and their family in Asheville NC. I fished 5 different waters from a small mountain creek to a wide open river for trout. In all of the five trout waters I caught at least one and some times two big trout.
I took out the Arturo Fuente Double Chateau sun grown and lit it up. The smooth tasty tobacco was a great way to top off a good vacation. 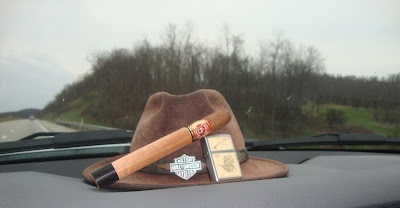