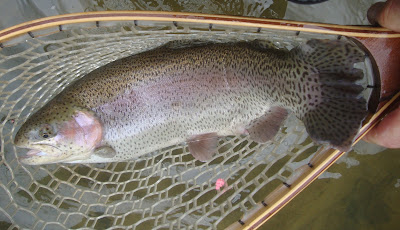 My second cast was a bit upstream near the partially wet exposed boulder that split the water current into a deep riffle behind it. I made a short mend upstream and the tear drop indicator changed direction bringing my tandem offering deep into the riffle. I watched the drift as it passed before me along the crease in the riffles. The indicator suddenly dropped underneath the surface and I yanked upward to set the hook. I felt the rod flex into the mid section and maybe even into the butt section. I tightened my grip around the cork and locked my wrist trying to keep the butt section pointing upward. I knew in an instant I had a heavy fish.
The trout must have been as surprised as I was. It rose to the surface after the hook set briefly, with the rod tension, as if to wonder “what just happened?” This is when I got my first brief look of the fat rainbow.
She dove deep and took off below the riffling water behind the boulder and forced her way downstream with the current in a hurry. The flexing rod followed the direction of the trout as tensioned fly line exited the spool and slipped through the rod eyes and tip top. I dropped the rod tip just above the surface some not wanting the big trout to surface in the oncoming current. I seen the pink sucker spawn when she rose so I knew she took the small olive nymph I had as a dropper.
Down stream she gave a good head shake or two, held in the current and started a downstream to and fro head shaking, body shaking fight. It wasn’t long before she started up creek and she was rising. I cranked in line not wanting a bunch of unspooled fly line lying on the surface. I also raised the rod tip keeping a tight line. She put up a good fight as we both attempted to take more control than the other. I had her just below the surface coming towards the net but with a burst of energy, upon seeing the net; she propelled herself away in a thrusting motion. The rod flexed a little deeper and line slipped out through the guides but the tightened drag slowed her escape. She turned down creek and spun towards me. The tensioned drag kept her from taking any more line and it was if we were at a stand still giving me more time to think.
I couldn’t land her because of the high muddy bank. I also couldn’t wade down creek because of the cement bridge abutment and not sure how deep the water would be. The current was much slower between me and the bank which I decided was my best option to net her. As long as I kept her from rubbing the tippet on the bottom rocks I had a good chance of keeping her hooked.
I turned towards the bank and stated to reel her towards that direction. She rose just below the surface and I could tell she didn’t have much energy to fight aggressively for a last surge. I let her swim upstream a bit between me and the bank. I raised my outstretched rod arm as I dipped the net below the surface with my outstretched left hand. Slowly I lowered the rod tip and the trout started to back up towards the net. Close enough I raised the rod tip just high enough the trout rose up in the water column and I was able to sweep her up in the net. She twisted and squirmed a bit but she was pretty played out. The weight of her in the net was so great I butted the side of the net against my gut while I waded to the bank. She was the first birthday trout of 2018. I found the small olive nymph was hooked in the corner of her mouth. 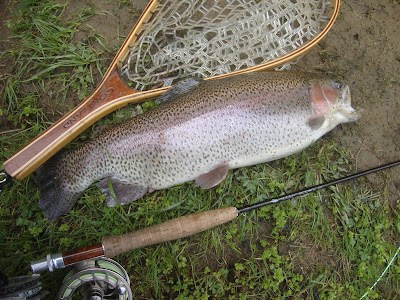 If One wasn’t Enough 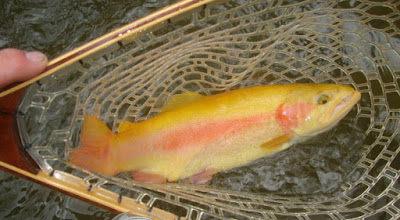 What got me fishing there in the first place was from the bridge Jeff and I saw a golden trout holding behind an exposed boulder when we first arrived. There was someone else fishing for it so we ended up going down creek to fish. Later on I returned to the truck for a water break and, with no one else around, started fishing in the same area. From the water level I was fishing I couldn’t see the golden trout but I did know it was around the exposed boulder. I learned a long time ago where there’s a golden there is sure to be other trout near by.
For the next hour, I would say after catching the big rainbow, I started slamming other rainbows with a combination of sucker spawn and selected nymphs as a dropper. The bite was tapering off when Jeff called down from the bridge. He had a bird’s eye view of the golden. This made me more interested in fishing for the golden trout. He could see the golden without any problem. He told me it looked like it was feeding on something below the surface in the current. He could tell by the way it darted out from its hold but returned afterwards. I decided to knot on a wet fly with a weighted nymph as a dropper. Jeff was kind of coaching me where the golden was located by the drift of my indicator. While fishing for the golden I did catch one fish on the wet fly, missed a hook set on another and caught one on the nymph while Jeff watched from above.

I laid the indicator just forward of the partially exposed boulder even with the risk of snagging it. As the indicator reached the boulder I gave a high mend up creek letting my tandem offering drift over the boulder snag free. I quickly dropped the rod tip and kept short mends behind the indicator as needed. The teardrop indicator turned up creek as it dipped below the surface. I yanked back and downstream and the line tightened. Jeff yelled “you got him!” Well I knew I had a trout with the tight line but I didn’t realize I had ’him’ until I seen the flash of the yellow/golden trout about a foot below the surface. He took off out and away taking line. From then on it was head shaking, tugging, quick jerks and pulling as he struggled. The rod flexed and bounced with each aggressive thwart by the angry trout. He shook the line, rod and hook every which way but loose. The only thing that didn’t change was my tight grip on the cork and my patience even though I knew at any second the hook might come dislodged. When he was directly down creek from me and trying to rest I already knew my plan on where to net him with the big rainbow I netted previously. I didn’t let him rest and swung the rod between me and the bank side. He hesitantly swam forward but maybe seen an escape route and quickly darted upstream between me and the bank. I raised the rod as he passed by and dropped it some once he passed me. When the rod started to flex more he slowed up and maybe a bit puzzled. I reached back for my net and had it ready when he returned between me and the bank. I pulled back on the flexed rod and he turn towards the net. Not having much room to get around it he turned again but with the lift of the rod he rose and reared backward and I was able to scoop him up without him knowing what was coming. He thrashed and squirmed in the net but I had him deep enough in the net he wasn’t getting out. I held the net with both hands, while holding the rod, till he settled down some. I followed the tippet and when he opened his mouth the wet fly was hooked firmly on his tongue. He stayed still long enough for me to do a quick surgical maneuver. As soon as I clamped on the hook, with the hemostats, I twisted the hook upward and the point slipped out. The golden gave a quick jerking flinch like a person just getting a tooth pulled! I reached in the net and got a picture before I set him free. 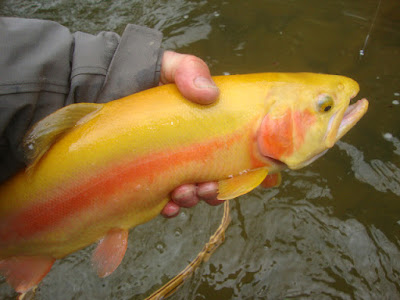 He dropped to the bottom with his belly nearest the creek bed. He held there like he was catching his breath and regaining his presence of mind. When he started to move his fins and tail a little more I felt better. He ended up swimming slowly under the bridge and held there in the deeper flow.
I attached the wet fly to the hook keeper on the rod and told Jeff “I’m done, no use of fishing any longer!”

Two things that I have to mention that happened before these birthday trout. Jeff and I were fishing Kettle Creek the past week. It was high and fast. Wet flies caught more fish in the first couple of days we were there. Because of this I was out of the wet fly I knew was productive in the creek I was fishing. The night before I tied up a half dozen or so before going to bed early because I was getting up early to turkey hunt.
The second thing is when I went back to the truck after fishing earlier I decided to take my camera along this time just in case. I didn’t take it earlier because it was off and on sprinkling. The just in case worked out because you know what they say? Pictures or it didn’t happen! 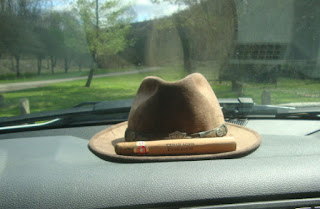 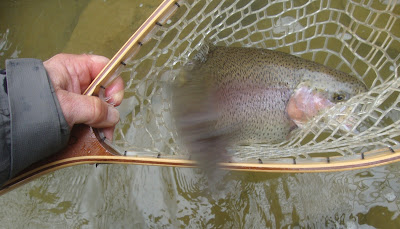