Fishing Creek 2008
(From the Journal) 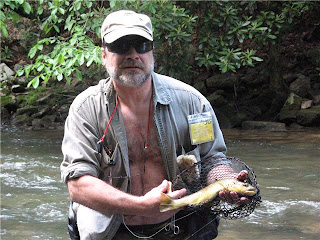 We eat lunch along the stream on the tailgate of his truck. Salami, capicolla, pepperoni, dried olives, a beer you know?! Light reflex off the chrome on the front springs of the Softail. The warm sun penetrates my shirt and soothes my skin. I fall asleep in the lounge chair Jeff has set out.

After lunch and the power nap Jeff headed downstream as I walk upstream beyond where we started in the morning for some fresher water. There are more guys fishing the stream than I was aware of. I stepped into the creek downstream from where a few guys are fishing. Looking downstream 3 other men are wading and fishing upstream. I take a position in the middle of the creek and fish the log along the roadside bank. I watch the three guys fishing towards me. The guy fishing the far bank moves stealthy and with purpose. Casting underneath hanging pine boughs and to likely lies behind exposed rocks.
The other two splash their way along their side of the creek. One didn’t even cast at all but watched and coached where the other should try next. Neither caught trout underneath the afternoon sun.
I slowly fished downstream casting under overhanging fir trees. Steadily I wade downstream changing flies and drifting midges. I came to the shady bend I fished earlier. I pick off two more brook trout and a small brown on #14 dry. I fished it hard with anticipating on catching more but can’t produce any.
.
Just before dark I met up with Jeff at the big deeper flat stretch we fished in the morning. Drakes filled the sky above us and a few appeared upon the water surface. The fish were still not excepting the imitations we had to offer but we continued trying to persuade them.

At about dusk I head to the cycle and packed up for the ride back home. I put a chew in my mouth and start the rumble of the V-twin. I beeped the horn as I passed Jeff in the stream with his L.L.Bean light up brimmed hat on. It didn’t take long as I cruised down the road to realize my adversity.

Big, big Green Drakes were flying upstream low. The road down to rte. 64 follows the stream within 20 feet in some areas. I was traveling in the opposite direction on my windshield-less cycle. Drakes literally cremated me from my leather du-rag to my leather boots. Big drakes splattered against my goggles making my vision as if looking through a stained glass window. They were so thick I was even afraid to turn and open my lips wide enough to spit!!