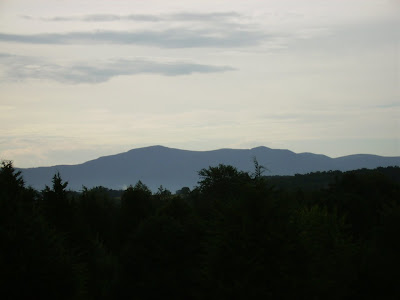 View from the cabin

My sons, Jeff and I decided to adventure south to the Shenandoah Valley in July. As seasoned trout fishermen we wanted to test our stream knowledge and fly fishing capabilities for smallmouth in the Shenandoah River. We selected the North and South Fork around Luray and Edinburg Virginia. With a guide set up for Friday, out of the Harry Murray Fly Shop for some helpful instructions, we were ready for some river action. When we were off the river we brought plenty of venison in forms of burgers, roasts and chip steaks. A few bottles of home made wine with cheese and crackers as well as beer, beer, and more beer! Here’s how it went.

Thursday evening, about 4:30pm, Jeff and I rolled into the small town of Edinburg Virginia after a 4 ½ hour drive from Pittsburgh in the ‘ol van’! We found Harry Murray Fly Shop/ Pharmacy on Main Street. We introduced ourselves to Harry and after a short conversation he prescribed a dose of Shenandoah River water to cure our smallmouth fever.
We followed the Tom-Tom over the Massenutten Mountains through the winding roads of Edinburg Gap. We found our semi-secluded cabin and emptied our non-fishing gear into our weekend retreat. We took a few bottles of our own prescribed thirst quenchers of La-Batts and Busch with us.
We found a Wal-Mart and bought our out-of-state fishing license. The girl was nice enough to scissor cut the computer copy of our licenses. Another employee showed up and he told us that night crawlers and certain rubber worms and jigs work well for catching fish in the river. Ya, right! He did tell us of a couple of places to try on the river though. We thanked him.
At the river we geared up with our fly rods and walked down a trail, above a small dam, as Harry prescribed for our evening exercise. Jeff wanted a little more exercise and proceeded up river. Looking over the water in front of me I decided to stay put and begin my fishing below the riffle run of wide open water before me.
Under the sunny and partial cloudy skies I began my smallmouth fishing. It didn’t take long before a fish tasted my olive woolly bugger. The fish put up a good hard fight in the fast deep current. I brought in a fat 10” chub looking fish and released him. After another chub fish I was beginning to wonder where the smallies were. Working the olive bugger in deep pools between the faster runs I finally hooked into a smallie. He fought across the bottom of the run and I brought the 9” smallmouth to hand. Looking upriver Jeff had a hook up too. My next option was to see how my home made cork poppers worked in these waters. Casting into the slow eddies and deep pools I popped the cork towards me and waited. My first catch was a sunfish but continued casts and working the popper produced those chubs and a few fat active smallmouth in the 7”-9” range. We fished into the evening with good success. I even found a few selective fish that took one of my orange Humpy pattern. Our fever was receding.
Back at camp we ate deer burgers and relaxed with a few beers while waiting for my sons to arrive.
My eldest son, Jeremy, was picking up my son Giddeon in DC at the Ronald Reagan airport. The flight was supposed to come in at 11:00pm. We got a call from Jeremy telling us the flight was delayed and wasn’t sure when he would get in.
When it was all said and done they arrived at the cabin at 4:10am. After welcoming my sons they hit their sleeping quarters tired and fatigued. At 10 minutes to 5 a cock crowed in the early daybreak of the morning light. My sons, nor I, were very happy.
We were to meet our guide, back at the shop, at 9:00am for some prescribed personal relief, the fishing kind!!
_______________doubletaper