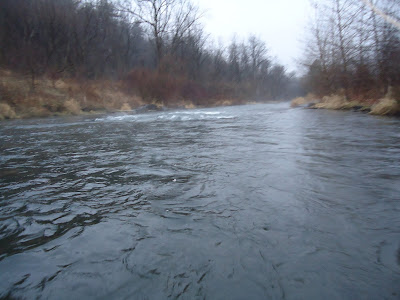 “I couldn’t land all the wild brown trout on an #18 nymph in the fast current but it sure was fun trying.”

I put the last few items in the truck and headed for Spring Creek in central PA. It was 28 degrees when I left and as I drove East the sun was playing peek-a-boo through the gray cloud cover. The weathermen predicted high thirties for the day with cloud cover and possible rain in the afternoon. For Wednesday was to be in the 40’s and sunshine. I’ve been watching the water gauge and I saw the level was going down from the rain and snow run off from the past weekend. I was hoping to get some trout fishing in before the next freezing wintry weather came upon us.
1/14/2020
When I got to the Milesburg exit my truck thermometer read 38 degrees. When I got to Milesburg and Spring Creek the thermometer showed 32 degrees at 10:00. I tried relaxing in the truck to wait for the temperature to rise but that only lasted a couple of minutes before I started to get my gear on and ready to hit the stream. I bundled up warm and took to the water.
The water was running fast but wadeable. The overcast sky didn’t bring much light to the creek and you couldn’t see through the water with polarized glasses except for about a few yards around you. The subtle surface glare and darkness made it tough to determine how deep the water was otherwise.
I started off with a Flashback nymph and a San Juan worm as a dropper. With the fast current I decided an indicator would be more of a deterrence than a helper. After a half hour or so of different combinations of nymphs I decided to go small. I kept the flashback as the top fly to attract attention in the fast current and knotted on a #18 nymph as a dropper. I’m not sure how the trout even see that small of a nymph and be able to grab it in fast current but they find it.
It took 3 lost trout before I was able to land one wild brown. Not a big one but it broke the ice.

By 2:00 a mist of rain fell. It felt like the mist from Niagara Falls. It left small wet spots on my coat and I could feel the misty moisture on my hands and face. I headed back to the truck for my rain gear. After getting my rain gear on I was back out at it again. 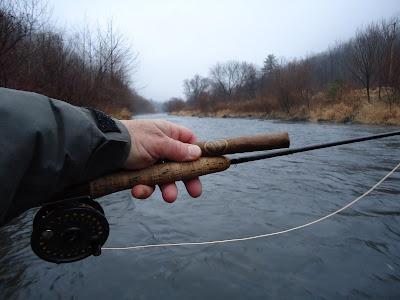 Now that I found the right combination a little more fun started to happen. Hooking into wild brown trout is something to experience. I’ve caught brown trout before. Through my experience usually a brown will stay deep and use its forceful strength to test your line and rod. It will head shake harshly and I’ve had them alligator roll getting the line tangled up over them. These wild browns act down right crazy once hooked. They’ll shoot out of the water once hooked like a rainbow. Unlike the grace of a rainbow that will show you acrobatic skill and fine form out of the water these slender wild browns don’t seam to give a crap about what they look like in the air. They shoot up out of the water more at an angle as if ready to hop over obstacles on their way. Their bodies twist, wiggle and squirm erratically trying to get loose as they are air bound. It’s almost like they have been caught before and are pissed off that they were faked out taking an imitation nymph and are embarrassed getting hooked again. In the water they act more like a brook trout with sudden darting turns in all directions. It’s a quick enjoyable, rod flexing, fight positive encounter. 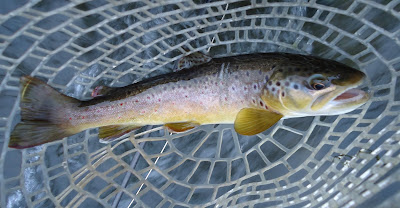 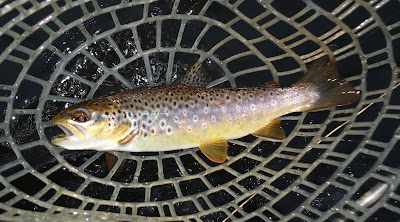 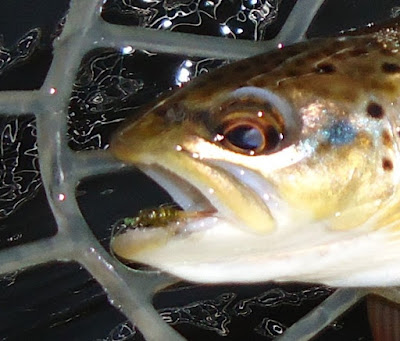 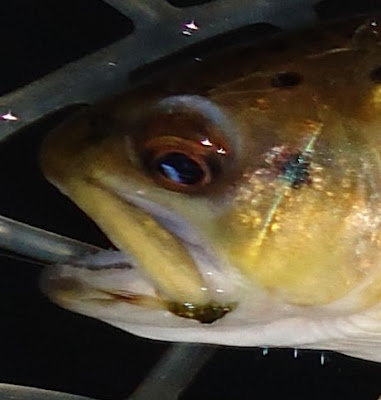 Back at the truck I enjoyed a cold Guinness before heading out. 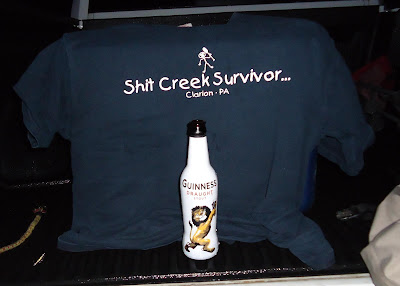 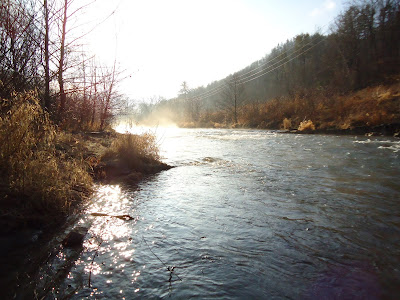 By the time I got to the creek Wednesday morning fog was burning off the surface. In the distance, with the suns rays shining upon the water, looked as if the creek was on fire. The water had dropped some and was much clearer with the sunlight and I could tell the depth and some rock hazards from some distance away. The air was a bit chilly but the sun did provide some warmth beneath my layers of clothes.
I had lost a few nymphs the day before but still had plenty of the #18 nymphs that were successful. I decided to go with a bead head Hare’s ear for my top fly to maybe attract attention and drooped the #18 nymph below. The creek didn’t appear as fast as it was the day before and was a much even flow. For this reason I decided to use an indicator. I felt this would be much easier to control my drift especially on distant casts. The trout had been taking the nymphs pretty aggressively so I wasn’t using the indicator as a helpful aid to detect strikes but more to control my drifts. Other than the Olive nymphs I’ve been catching browns on I did catch one nice wild brown on a peeking caddis. The browns I caught, or lost, were just as aggressive and wild as the ones the day before, flipping and twisting in the air like a short slim wind sock holding in the breeze by a few strands of twine. 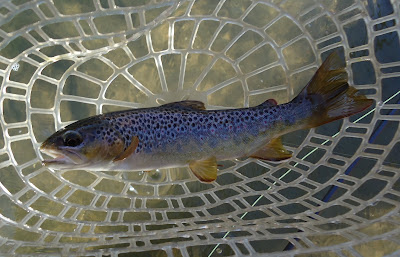 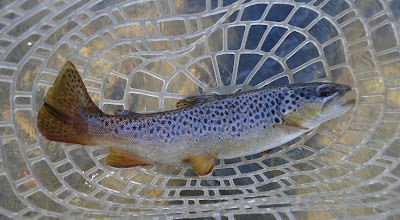 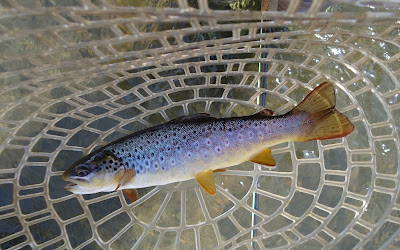 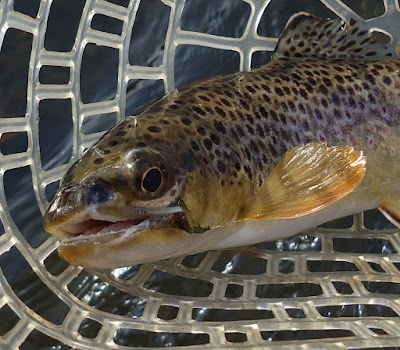 Now, I could have ended this 2 day outing with talking about the biggest trout that got away. One I wouldn’t have a picture of since I wouldn’t have landed him. I had the opportunity to break the line and maybe he would get free or take the chance of untangling the line and possibly still landing him. I elected to do the latter.
I was just a few feet upstream from a few blocks of cement, in knee deep water, that water overflowed making a falls and turbulent water to the tail out. I was only a couple of yards from the bank to my right. Reaching out over the blocks was a downed branch that some of its twigs were submerged along the right side of the turbulent water. I reached out over the falls with the rod and began drifting the nymphs, under the indicator, through the current. It’s one of those times I don’t think of if I do hook a fish how am I going to bring him to the net? On one drift through I caught a glance, at the corner of my eye a streak of silver, like a lightening bolt, come out from beneath the twigs towards my drifting nymphs. He took the nymph with a sweeping take that the indicator skirted the water surface like the barrel when the shark pulled it away in the movie Jaws. I wrist set the hook but not too aggressive on the take. The top fly was knotted to 4x tippet while I use 5x tippet for the dropper. I do this in case that the dropper snags up I may lose the dropper fly but not the upper fly do to it being knotted to a heavier tippet material. Since the trout have been taking the dropper I was afraid to set the hook too strongly and breaking off. The rainbow, I assumed being the silver streak I had quickly noticed, fought towards the tail out taking line. He turned upstream and started with the head shakes and pulls. I could tell it was a nice size trout by his fighting. While this was going on I had to figure out just how I was going to bring him in.
To the right was the submerged branch so bringing him towards the bank was no option. Trying to net him below the falls while reaching over wasn’t very practical or considered safe. My choice was to swing him towards the middle of the creek and try bringing him through the less rougher current just left of the block wall of the falls. I turned the rod to my left and I had him fighting his way towards where I wanted him to follow. He must have seen the submerged branch as I was bringing him in and darted deep and towards the submerged branches for cover. Now I’m not sure if he was some master mind in line twisting or knot making but he accomplished getting the line twisted in one of the submerged twigs. My rod was arced towards the submerged twigs but I could no longer feel the trout tugging. I looked over the blocks and into the deep water and I saw the rainbow struggling, still attached to my tippet, about 3 to 4 feet away from the branch. I lowered the rod tip section into the water and tried to untangle the line but it didn’t work. I still couldn’t feel the fish tugging. Now, I could have ended the ordeal right then by breaking the line and hoping the rainbow can free itself. My other option was to some how carefully, cautiously and maybe dangerously try to grab the branch and break it off. (The danger part was falling in and hurting myself.) I chose to live dangerously and not have to worry if the trout ever got loose on its own.
I carefully knelt on the moss covered blocks and felt secure. I grabbed the branch and raised it to see how far the tangle was. I got the branch raised enough that I could see the tangled mess the trout got us into. Meanwhile the rainbow would fight a bit with the line trying to break free. I was surprised that if he had taken the dropper that he would have broken it by know. I grabbed the branch a little further out and was able to reach the tangled twig. I twisted and bent the twig till it broke free of the branch. The trout pulled away with the piece of twig but I could tell he didn’t have much energy left. Luckily the twig came free of the line that I didn’t have to deal with. Since I was already secure on my knees I brought the trout close enough to the block dam and reached down and netted the rainbow. I got to my feet, behind the blocks, with the big rainbow in the net. 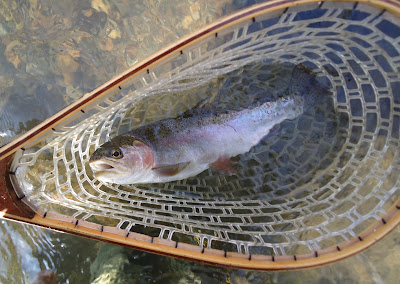 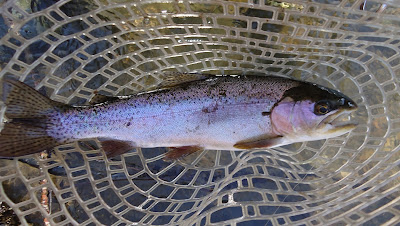 I found that the rainbow had taken the bead head Hare’s ear that was knotted to the 4x tippet.
Well, the biggest trout of the 2 day outing didn’t get away after all until I felt him forcefully slip out of my hand, over the brim of the net, and into the current.
I caught a couple of browns later on but by the time I fished my way to the truck I was satisfied and ready to head for home. 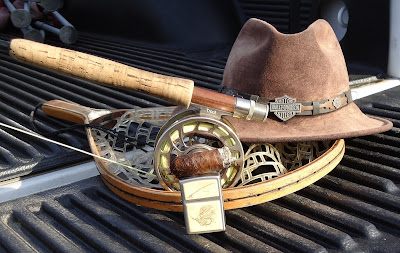 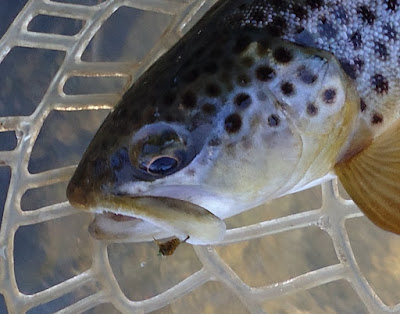