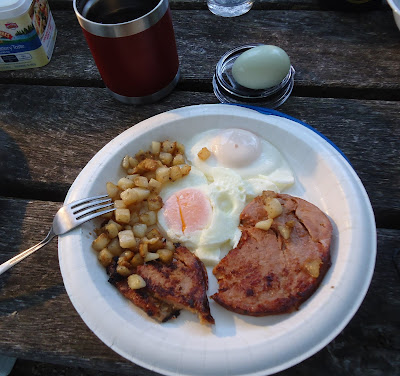 Sunday, Sunday. I woke up 62 years old. Didn’t feel any older than the few days before but I was up for the challenge. I made myself a birthday breakfast worth feasting on. Green eggs and ham with potatoes and a cup of coffee. Not bad for camping food.


Kettle Creek had come down considerably from Saturdays high water but we had already made plans to head towards Coudersport and fish some new streams in the area. After breakfast we checked out the map and headed North.
We found our way to the project waters on the Allegheny River. The weatherman called for some rain in the afternoon so we donned our rain gear and headed to the river. We split up as Jeff took a trail upstream and I crossed the field to the river.

Now, when I think of the Allegheny River I’m imaging wide water with lots of room to cast out. I’m thinking boats and watercraft. Deep sections not wadable under any circumstances. Well, the head waters of the Allegheny River is a small narrow stream that my 7 years old grandson could throw a rock across in many of the areas. The section we were fishing meandered through forest and farmland.

When I got to the stream it had a chocolate color to it and it was hard to tell how deep it was from the bank. I could see bottom along the shoreline and it looked mostly silty and soft. I walked up the bank, on the grass, till I got to the wood line and started fishing my way downstream. Of course I started with a bugger controlling it to avoid hazards such as downed logs and submerged branches. When I got to a section where the water had split around a small island and converged together on the other end I thought sure I would get a hook up. That didn’t happen so I continued on.


There was one thorny tree a dozen yards behind me in the open field. The river in front of me was wide, wide enough that I could cast to the other side without a problem. The sun was actually shining down and the murky surface water was becoming translucent. I added a little more weight and was casting out a variety of Woolly Bugger colors though that thorny tree behind me wasn’t allowing me at times. I’m not sure if it felt lonely and neglected or it just liked my Woolly Buggers. It grabbed the bugger on my back cast quite a few times that I had a good notion to somehow trim the branches or try to cut it down completely. I’m sure I looked silly from the road being seen in a field wrestling with the small bushy tree. I know I’d feel kind of embarrassed explaining to the officer that the tree was trying to rob me of my Woolly Buggers and I was just eliminating the threat by trimming it. I know the landowner might not appreciate it nor would the trout fishermen. Of coarse I wouldn’t do such a thing but at times, while untangling my line and tying on fresh tippet, I imagined it.


Downstream a bit there were a couple trees that their narrow trunks were submerged in the water. Their branches overhung the water with a few of their branches submerged in the murky deep water unseen. I had no doubt there had to be some trout hiding out under cover. I could of extended my rod out and dipped a few San Juan’s but hooking a trout in the tangles wasn’t a bright idea by any means. I was upstream enough that I would cast the bugger cross towards the far bank. I left slack in the line that it arced in the current, letting the bugger drop deeper, before the bugger began to swing beneath. I’d twitch the rod tip to give the bugger a little more action on the swing. Reaching the rod out, just before the bugger swung too close to the trees, I took in line quick enough not to get caught in the submerged branches.


Now, just about anyone I talk to or read about claim that in murky water your best choice is a darker offering. This usually is good advice. My darker colors weren’t producing anything so I switched to a white bugger. I made a long cast in the same manner as before. The white bugger dropped deep and I watched the floating fly line as it arced downstream swinging the bugger. I let out a little more line to get the bugger to swing a little further downstream out from the couple of trees. I noticed the arc in the line start to narrow and the tip started to sink as if I had a snag. I took in line, while pulling back on the rod, and I felt a little give. I thought maybe I had snagged on a submerged branch twig and gave a little more of a tug on the rod to maybe get it to become undone. When the line started to move upstream I knew it wasn’t a twig. I jerked the rod back a little more heavier to make sure of a good hook set. The rod tip arced and the line started to run upstream a little more quickly. The fish stayed deep but wasn’t head shaking or aggressively fighting.


“What was the odds of hooking into a sucker with a Woolly Bugger in this small stream?” I thought. I mean there was no doubt there were probably suckers in the water but I wouldn’t think they would take a Woolly Bugger.


I kept the rod up, while the fish swam around, waiting for it to tire some. I could tell it was a heavy fish by the force it was putting on the arced rod. I hadn’t caught anything as of yet and letting the fish play a little without horsing it was the most excitement I had all day. Though I was anxious to see the fish it stayed deep in the murky water and kept its distance. I looked along the shoreline and found a place that didn’t look too muddy that I would sink in. I carefully stepped off the bank and found myself in shin deep water, all the while the fish was effortlessly pulling on the tight line and swimming around like a lone goldfish in a water filled glass globe. I started reeling in the fish and he came my way quite handily. I got out my net and when I saw what was on the end of my line I quite surprised. So surprised I felt like a kid getting to the bottom of the stairs on Christmas and seeing his first skateboard under the Christmas tree! There was my birthday trout laying quietly in my net with the white Woolly Bugger hanging out of its mouth. 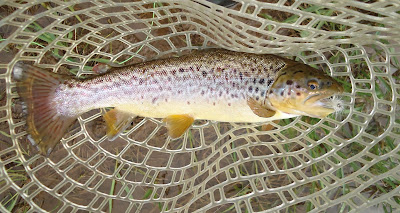 Now, I’m not sure if the trout had been caught before and he figured it was just going to be released anyway so why exert much energy or it just wanted to end its life in someones frying pan instead of dying of old age. Whatever the reason the brown trout didn’t fight aggressively is beyond reason but it made my long standing birthday trout list and became my birthday trout for 2019. I tipped the net in the water and the brown trout swam away like he was proud to make my list!

The rest of the day was almost fruitless only hooking into a couple of smaller trout. Jeff had found a honey hole and was catching trout sporadically with what else, a white Woolly Bugger. It started to rain off and on and when it began to down pour, without much reason to believe it was going to quit, we climbed in the truck and decided to head North East where the sun was shining. I always wanted to see and fish the Genesee River in Pennsylvania that I heard about. 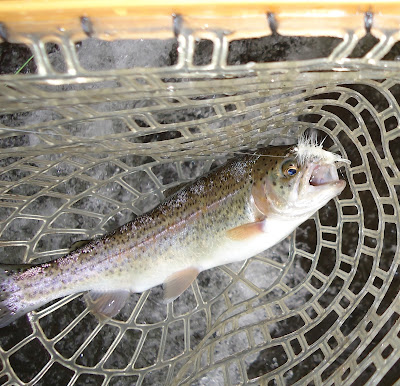 Jeff navigated the map while I drove. When we got to the Genesee River it actually looked narrower and shallower than the Allegheny River. We must of hit the headwaters that flowed through goat pastures and farm land. We followed the road towards New York and actually found a couple of fishermen. One young man was about waist deep in the skinny water looking as if he was nymph fishing. We decided to turn around and look for another trout stream. The rain caught up to us and we headed South East where the clouds weren’t so dark. Each time we got out of the rain it wasn’t long, if we stopped, before the rain would catch up to us. It was like that dark cloud in a cartoon show that would follow some Disney caricature in a funny wet story line. We ended up back to camp by early evening.


Later on we toasted to my Birthday. While Jeff ate jelly beans and drank beer I sat back and enjoyed a Carolina Cigar Co. Cabinet Selection. The smooth Cameroon was a pleasure smoking to end the day while listening to the sounds of the Kettle. 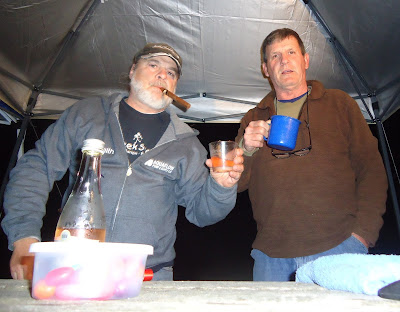 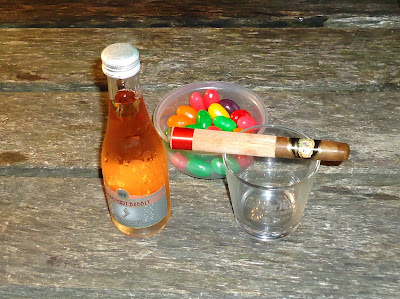