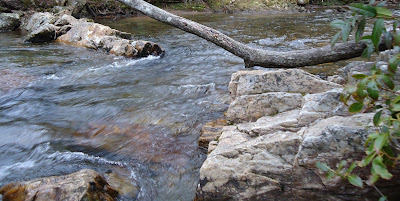 The water flows in small waves over colorful submerged boulders, around bends and then narrows between laurel and cliff banks. From there it continues, splashing around exposed boulders and over rock ledges falling and gurgling into deeper pools. Along the banks the water eases with a calmer surface under overhanging laurel branches or against the rock ledges. The water is soupy clear and if I look long enough in one spot the waves will subside and I can distinguish objects on the creek bed though trout I can not.
The air is cool and most likely from the cool vapors rising from the cold mountain stream water for the outside temperature is warmed by the sun as it slowly rises over the mountain's bare tree tops. Small midges appear here and there but I see no trout rising to the minuscule flying insects.
Sand stone along the banks sparkle beneath the water like glitter that had fallen on a dance stage under a spot light performance. The steep gradient and changing undercurrent, from different levels, is strong enough that there is little sediment of loose dirt or silt. The granite boulders and rocks erode with the constant force of the current and leaves their loosened heavier granules spread out upon the stream bed.
I've seen pictures and paintings of western wide open trout streams. Rivers that flow in gorgeous settings with the backdrop of rising mountains. Though Beautiful they can not compare to the beautiful quaint, serene, cold water mountain streams such as these in North Carolina. Pictures and painting can't truly do these streams justice without the murmuring and gurgling sounds as the water flows through the boulder and laurel strewn valleys.
I fish the water swinging and stripping streamers without a strike. It wasn't until I cast upstream, with the streamers, and high stick them through like nymph fishing, that I finally started getting strikes and hook ups. I cautiously climb over big boulders to make my way along the stream. I wade foot by foot, feeling the stony rock bottom, making sure of steadying myself before each cast. I found with the constant changing of the surface current above and around boulders the seams on the surface weren't necessarily a feeding zone beneath. Therefore sometimes it took a few extra drifts through this undercurrent to find a trout. I could only imagine that the Woolly Buggers bouncing off of the boulders and rocks, in the erratic undercurrent, like a pinball bouncing off of bumpers and side rails. 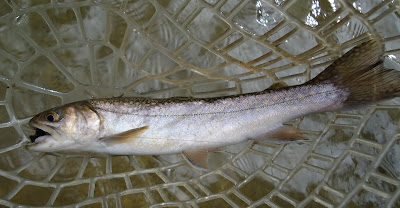 When I did hook up it could be just about anywhere, deep pools, tail outs, or along undercuts of extruding rock ledges or under overhanging laurel branches. I tried to cover as much as the water as possible on this account. 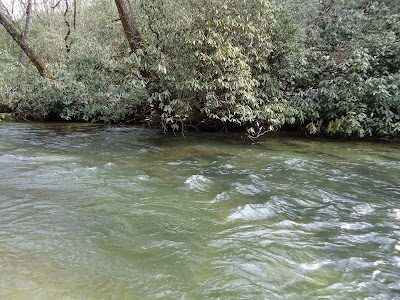 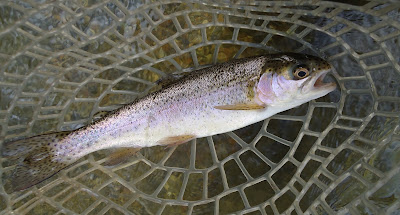 I was standing thigh high deep with my back against laurel branches. I had already caught a nice rainbow here earlier in the deep wavy current I was now looking at. I felt pretty sure there were other trout either beneath the strong current or laying near the far rock wall in the calmer water.

I switched to a white Woolly Bugger for no apparent reason except the olive color wasn't working. My first couple of casts followed the wavy fast current with no results. My next cast was upstream in the calmer water near the cliff. I held the rod over the faster current and watched the leader drift the bugger through the calmer current. After the drift passed me the leader and fly line dipped and stuck as if I snagged bottom. I gave a little chuckle under my breath and with a little force raised the rod and swept the rod tip upstream. The line not only tightened but pulled down stream. The 3 weight, 7 foot Hardy rod arced and wobbled with the tugging and struggling trout. I slowly waded downstream away from the laurel branches in more open water. The trout stayed deep thrashing at times aggressively. I slowly took in line under tension until the trout was within net reach. I took out my net, lifted the rod and netted the brown trout. 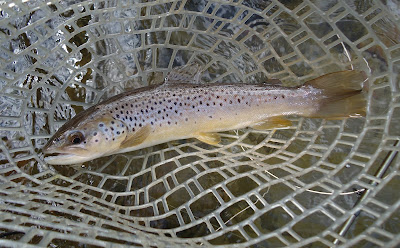 It wasn't too long after that my boys showed up from fishing upstream. My youngest son, Jesse Pete, got hold of a handful rainbow upstream. 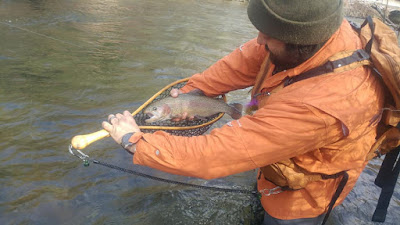 Giddeon also showed me picture of a nice lengthy brown trout he had caught also. 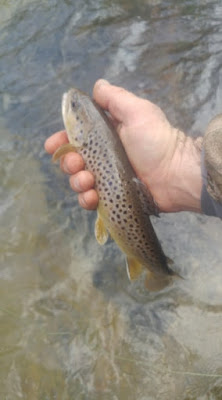 I hadn't caught anything near pound for pound what they caught but I had caught enough trout to keep me content. We fished for another 10 minutes or so and then called it a day.